We’re going back into Jay Leno’s Mercedes-Benz section, as the former TV star has something to show us again. And after displaying photos of Sir Stirling Moss in his early 40s and Juan Manuel Fangio’s world cup won in 1951, he gets to the point: there it is, in all its candy-red glory, the Mercedes-Benz 300 SL Gullwing Coupe.

“This is probably the most legendary Mercedes of all. This was the McLaren F1 of its days”, Jay Leno says proudly as he knocks in the chassis of the car that was first introduced more than six decades ago, at the International Auto Show in New York, in 1954.

Jay Leno tells the story of the red beauty trapped in his garage. He practically found it in a car-trashcan, out in the Californian desert. It had no engine, no transmission, various staff was missing. He immediately thought of it as a challenge. Soon his experts turned into what he calls “the most fantastic car to drive”. 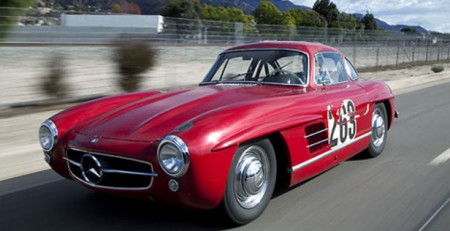 Jay Leno is now the third owner of the car. Even though it was considered garbage for a while and even though it had been a racecar before that, the automobile was never hit.

The previous owner bought it in 1971 and he completely restored the interior. Jay Leno intends to restore the exterior too.

The red candy on wheels comes to life as Jay Leno takes it out of his garage. With a 3.0-liter engine and 220 HP, the coupe was the first production car to feature a direct gasoline fuel injection, a system which turned it into a state-of-the-art vehicle at that time. But speaking of which, there is something really strange about it today: it’s got two horn buttons, a mechanical clock that shows time even without the ignition key in and it is completely electronics-free. It didn’t even come with a radio. But why would you need one, when the engine provides such a soundtrack!

Running the hills of Hollywood and the LA VIP suburbs, everything in the German classic clicks in. Elvis Presley, Sophia Loren and Frank Sinatra had a gullwing, too. Including the celebrity factor, Jay Leno says such cars will soon reach the 1 million dollars milestone going on sale.

Even though the automobile was designed back in the 50s, Jay Leno says it is modern fast! “It is so aerodynamic, even the door handles are flat. Nothing interferes with the flow of air over the car.” It ran by 150 mph (240 km/h), which was pretty good at that time. And what a time that was!..