Jay Leno and his love for the Mercedes Blue Wonder transporter

Jay Leno’s passion for the history of the automobile knows no boundaries. Thankfully, he doesn’t keep his vast collection all for himself. Every now and then, the former TV legend presents one of his gems and is now the turn of the legendary Mercedes Blue Wonder racing transporter.

Of course, Leno’s car is not the real deal, since the only Mercedes Blue Wonder in existence is on show at the Mercedes-Benz Museum with a 300 SLR (W 196 S) on its load surface. The original vehicle was destroyed and then rebuild in 1993. Following seven years of meticulous work by the experts, the racing transporter was unveiled in all its former glory once again in 2001.

Jay Leno’s car is a replica created by a Swedish enthusiast. Its creator didn’t see it completed, though, with Leno acquiring it and making it fully functional following his death.

In the early 1950s, Mercedes-Benz made its mark away from the actual race track with the “world’s fastest racing transporter”. The racing transporter was required to be fast – very fast, together with its load, in the form of a Grand Prix racing car or an SLR racing sports car.

The X-type tubular frame forming the basis of the vehicle originated from the 300 S model, while the powerful engine came from the 300 SL. The racing transporter’s designers also used parts from the 180 model. The end result was a technically unique vehicle sporting a correspondingly distinctive appearance, with a wheelbase of 3050 mm and a top speed of 160 to 170 km/h, according to payload. 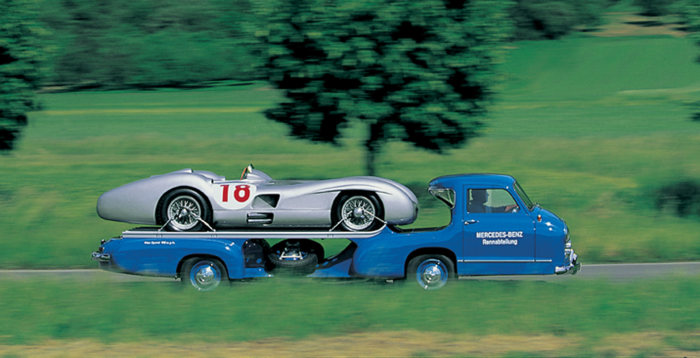 The high-speed transporter was ready for service in 1955. The racing department deployed the vehicle first and foremost for special tasks – when a car needed to be transported to the race track quickly after final tuning or adjustments, or returned to the factory swiftly after a race in order to gain more time for repairs.

The racing transporter became something of a sensation on Europe’s roads, attracting great popularity as it darted from race track to race track.