Jackpot for Mercedes – P1 and P2 in Silverstone after fabulous race

Whoever said Formula 1 was boring, he should have waited for this race to decide. Mercedes-AMG PETRONAS put both drivers on top of the podium in Silverstone, with Lewis Hamilton starting from pole position and with Valtteri Bottas climbing into the second position from the 9th spot on the grid. Lewis Hamilton fired up at his home Grand Prix and won for the fifth time, matching the records of Jim Clark and Alain Prost, slashing Sebastian Vettel’s advantage in the drivers’ ranking. A single point now stands between the two.

“I see you out there”, Lewis Hamilton told the British fans over the radio, after the finish line and promised that he would – as every year – surf the crowd. The Brit had led all the way from start to finish, but there was plenty of drama behind him. 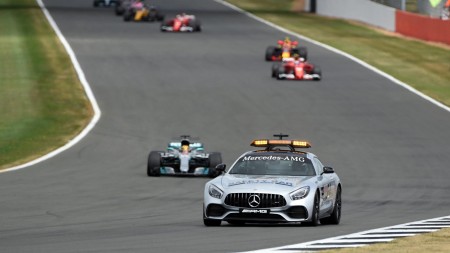 The Toro Rosso racing cars driven by Carlos Sainz and Daniil Kyat collided on the very first lap, so the Safety Car was deployed. Raikkonen was hunting him from behind, but the Fin’s best was not enough. Meanwhile, Sebastian Vettel had his share of war with Max Verstappen, who managed to build a wall in front of the German. A battle won at the pits, with the Red Bull mechanics having trouble with a wheel’s nut at the Dutchman’s car. 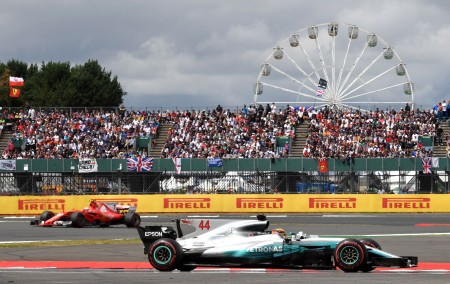 Valtteri Bottas was not wasting any time, constantly pushing forward, eventually climbing right behind Hamilton when the Ferrari-s pitted. The Fin than battled them both, having the advantage of fresh warm soft tires. Once Vettel an Raikkonen outpaced, the Mercedes Fin chased after teammate Hamilton, seeing the executives’ dream come true once again. Not far behind, as the Ferrari’s gave in to tire wear one by one and had to pit once again. Raikkonen miraculously recovered his place on the podium ahead of Verstappen. Another miracle was happening to Ricciardo. The Aussie, starting at the back of the grid for a gear box change penalty, finished fifth. Vettel had to settle for the seventh spot.

Formula 1 resumes in Budapest, for the Hungarian Grand Prix, in two weeks’ time.