Ferrari was hoping to get a victory at Monza, but Mercedes-AMG Petronas mocked their plans at the Italian Grand Prix. Lewis Hamilton won in Italy, followed by two Finns: one of the home favorites, Kimi Raikkonen of Ferrari and his teammate, Valtteri Bottas.

Sebastian Vettel needed to pit and change the front wing of his car, after a clench with Hamilton, that sent the Brit into the lead and the German to the back of the field. After the deployment and retirement of the Safety Car, Hamilton had his battle with Raikkonen, in the Roggia, making the Tifosi cheer. 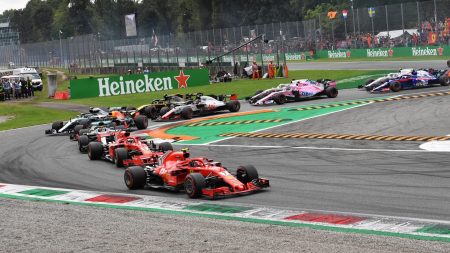 The Scuderia called Raikkonen in to pit at the end of lap 20. He was sent back out on a set of supersofts. Mercedes chose not to respond and kept Hamilton out for another eight laps. It seemed to be the wrong decision, as he rejoined 5.2s behind Raikkonen. But Raikkonen was baulked by Bottas, who had delayed his pit.

Hamilton kept slicing at least a second per lap out of the gap until he was right on the Finn’s tailwith 20 laps to go. Mercedes told Hamilton that “this race will be won or lost on tyres, you need to look after yours. It looks like Kimi is killing his”. They were referring to a blister that had appeared on Raikkonen’s rears. 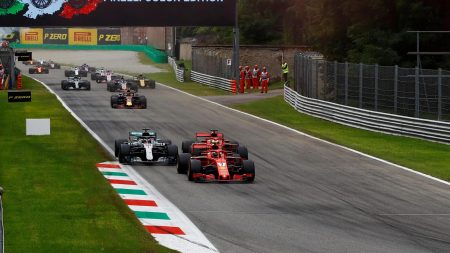 Bottas eventually pitted at the end of lap 36, leaving Raikkonen and Hamilton to battle for the lead. The Finn rejoined in fourth, just 3.2s behind Verstappen and began the chase for the final podium position, with the advantage of the 10-lap fresher tyres.

At the front, Hamilton kept pushing. Eventually, the Finn had to give in, as Hamilton made his move around the outside of the first chicane to take the lead on Lap 45. 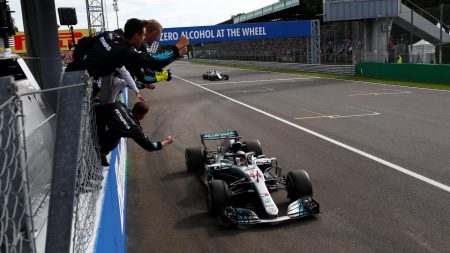 Ferrari then told Raikkonen to take care of his tyres and “bring the car home”. Verstappen and Bottas touched in Turn 1, with the Dutch receiving a five-second time penalty.

Bottas couldn’t find a way past, but he inherited the final podium position courtesy of Verstappen’s penalty. Vettel completed a strong recovery drive to finish fourth.

From Monza, Formula1 is moving to Singapore streets in two weeks’ time.