Is the Mercedes-Benz SLS AMG a real classic or not?

The Mercedes-Benz SLS AMG has left its moments of glory behind. It is now on the verge of becoming a classic. But does it deserve the status?

Inspired by the 1955 Mercedes-Benz 300 SL Gullwing, the Mercedes-Benz SLS AMG Gullwing is an iconic automobile. The mid-engine two-seater is both stylish and sporty and when its doors spring open, heads turn and eyes stare in wonder. Its stance, proportions, silhouette made of aluminum are all intriguing. 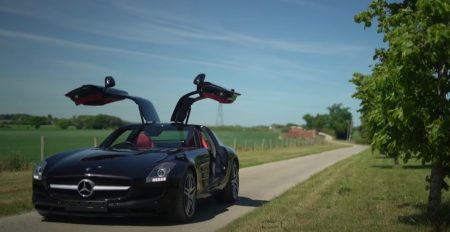 The round red button with chrome surrounding will surely put a smile on your face. It starts the 6.3-liter V8 engine underneath the massive hood with an angry roar. It develops 571 horsepower and 650 Newton meters of torque. A couple of pedal presses and it furiously growls as if ready for hunt.

The digital cluster features both modern and vintage accents that hint to its iconic predecessor, the 300 SL Gullwing.

How does the Mercedes-Benz SLS AMG drive?

The test driver sitting in the bucket seat pulls down the door and encloses himself in the red-leather cabin. A shorter driver would have a headache reaching up to close it. He engages the Drive on his gear selector and here he goes. The engine is connected to an AMG SPEEDSHIFT DCT 7-speed dual-clutch automatic transmission. 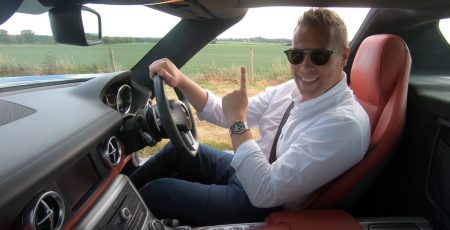 The minimalist multifunctional steering wheel is a pleasure to hold and the steering is very responsive. So is the throttle as the car thrusts forward with the huge bonnet cutting the air in two. The vents on it are a pretty sight from the driver’s seat and must be intimidating for the drivers coming from the opposite direction. The nimble behavior motivates the driver to push it closer to its limits. It is though capable of running from 0 to 100 km/h in 3.8 seconds and reach a top speed of 315 km/h.

But it still remains comfortable enough to spare the driver and passenger from the usual back pain caused by other super sports cars.

Out of production for five years already, the Mercedes-Benz SLS AMG is a sight to behold as a whole. “It still is a very cool looking car”, the driver says. And with a great potential of becoming a classic.