The world is striving to save itself and the car industry is giving a helping hand. With the electric propulsion at full speed, the hydrogen powered cars are not falling behind. Therefore, Daimler is working on expanding the fuel-cell filling network.

The Mercedes-Benz parent company has just announced that the network of hydrogen filling stations in Germany has grown to 32 stations. Two new filling locations for hydrogen-propelled cars have opened in Sindelfingen and Pforzheim. They are both located in already existing Shell service stations, as tech company Linde provides H2 filling technology. The three are partners in environmental-friendly technologies H2 Mobility joint venture, that is working on expanding the hydrogen infrastructure across the country.

The Sindelfingen station is located right outside the company’s Research & Development center, that is supervising the development of the Mercedes-Benz GLC F-Cell Plug-In. A production series variant is set to make its world debut later this year. 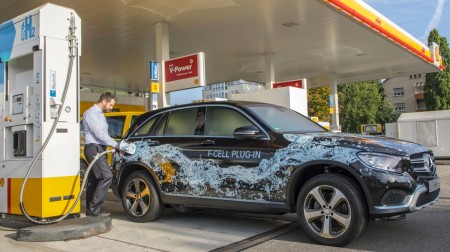 Apart from the electricity filling, the hydrogen refilling procedure only takes between three and five minutes to complete. The Sindelfingen and Pforzheim stations each feaure a capacity to serve no less than 40 hydrogen-powered vehicles per day.

Before the end of 2017, new stations are set to open in new locations: Wendlingen, Karlsruhe, Munich, Bremen and Kasssel are on the list. By the end of next year, the H2 Mobility joint venture plans to have 100 hydrogen filling stations across Germany. By 2023, the strategy is to hit a total of 400.