Hybrid sedans are all the rage today. And both the BMW 530e and Mercedes E 350 e are textbook examples of the success recipe: their four-cylinder gasoline engines are supported by electric motors that allow economical, limited emission-free driving. One question arises: What can the part-time electricians do better than their cheaper conventional siblings?

The layout is similar: the electric motor is integrated into the housing of the standard automatic transmission and sits behind a longitudinally installed four-cylinder direct-injection turbocharged engine with a displacement of two liters – 184 hp and 290 Nm in the BMW, 211 hp and 350 Nm in the Mercedes. Thanks to its 113 hp and 250 Nm electric motor, the BMW delivers 252 hp of system power, while the equivalent electric engine in the Mercedes boasts 88 hp and 440 Nm, taking the total up to 286 hp.

The driving impression confirm the surprisingly sporty nature of the Mercedes. The E 350 e is more emphatic, the steering is just as direct as the BMW’s. The stopwatch shows similar acceleration: 6.4 seconds for the sprint from 0 to 100 km / h. Even beyond this regulars mark, both march with due emphasis further towards 200 km / h, where the E-Class arrives at the blink of an eye later. The advantage is only at top speed. 250 instead of 235 km / h for the BMW. More important in the future is probably the range in pure electric mode: here, the E 350 e empties the battery after a measly 24 kilometers and turns on the combustion engine, smoothly and discreetly. This also applies to the interaction in mixed operation including e-boost. Running pure on electricity, the 530e shows 31 kilometers. And where we are currently in range issue: Based on the eco-consumption of the Mercedes is a good 100 kilometers further than the BMW – for frequent travelers quite interesting.

More comfort in the E 350 e
We certainly like the relaxed nature of the E-Class. It is simply impressive how relaxed this car carries its driver over long distances, to which the acoustic insulating glass (1,309 euros) and the air suspension (2,261 euros) of the test car of course have their credits. 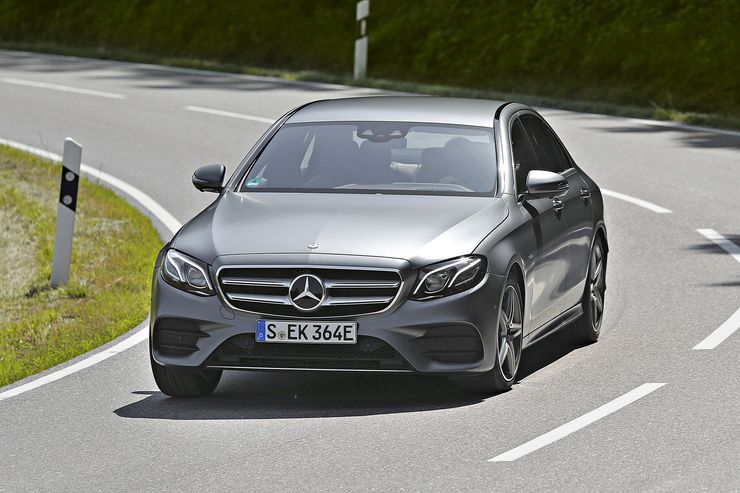 This level misses the Adaptive dampers (1,190 euros), pumping in Comfort mode more on rural roads and are more offensive over the cross grooves and joints. He also disturbs in higher speed ranges more with wind noise around the mirrors and A-pillars.

Still, it’s a pleasing freeway car that boasts good front seats and better (because softer upholstered and commode-shaped) seats at the rear. However, the fact that both offer around 100 liters less trunk volume compared to the pure diesel or gasoline versions is just as much a consequence of hybridization. At the same time, this means a slightly short payload for the BMW (519 and 572 kilograms for the Mercedes). Even on the subject of handling, the traditional BMW domain, the 5-series and the E-Class can not fool you: Although the test car was equipped with the active steering for 1,250 euros, in which the rear wheels improve driving stability and agility steer in the BMW. However, the E 350 e also lacked the light-footedness of the non-hybrid, as curves reveal the sheer mass of two tons is reflected in the sluggish, muffled reactions. No question: These mid-size sedans feel almost as weighty and state-bearing as their even larger upper-class rivals the 7 Series and S-Class.

They are also similar in terms of security and multimedia. In the former Mercedes is ahead of the BMW, who has also massively upgraded rear side airbags. The BMW also brakes a little worse, but now also has an Wi-Fi hotspot.

Such as the high functionality of the bodies and the quality of workmanship, the less nested operation of the BMW and the sometimes indecisively acting nine-speed auto gearbox of the Mercedes are not real news. They affect not only the plug-in hybrids, but the series altogether. 5 Series and E-Class have a rightful place – with or without an additional e in the name – in the front rank of the class. To buy them as a hybid, empties the wallet despite the cheap fuel bills (the BMW about 8.70 euros per 100 km, the Mercedes just under 7.90 euros). For the 530i variant with 252 PS petrol engine BMW asks one bearable surcharge of 2,800 euros, while Mercedes wants for E 300 hybrid more than 6,500 euros more expensive investnment. .

2. BMW 530e iPerformance Luxury Line
496 points
Not only in terms of comfort, but also in terms of dynamics and sensitive price, the 530e falls behind. Partial and comprehensive insurance are surprisingly expensive. 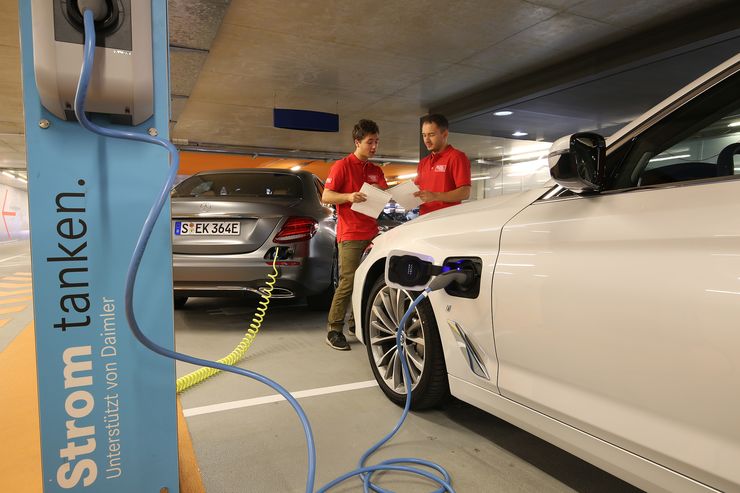