How would a hotter Mercedes-Benz GLC 63 AMG look like?

Mercedes-Benz GLC has stolen the spotlight these days. But it’s not all about the first plug-in hybrid in its segment. How about a hotter AMG variant?

Russian designer X-Tomi is quick to address the matter giving us a world-first glimpse on how would a top-of-the-line fully-fledged sports GLC variant could look like. And it’s not bad. Not bad at all, we would say.

As expected, the GLC 63 AMG rendering is the result of grafting the now ubiquitous Mercedes-AMG C 63 cues such as the wide gaping front air intake, aprons, black alloys and the mesh-grille on the regular body. This is exactly what Mercedes-AMG specialists are having in mind for their own official version anyway so, after all, X-Tomi’s take might be closer than you think to the real deal. 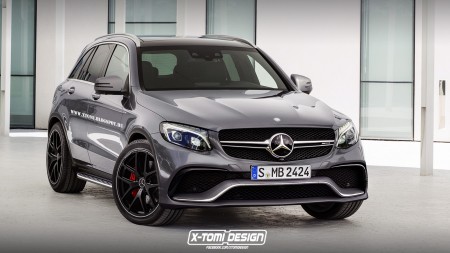 Specifications remain secret, but we can easily speculate about what might be hiding under the ball dress. Although not yet officially confirmed, the GLC 63 AMG will sport the brand new 4,0 litre V8 bi-turbo lifted straight from its C 63 AMG smaller brother. In two flavours, of course, the 476 HP entry-level version (if we can call it that away given its on-board arsenal) and the 510 HP range-topper in the shape of the GLC 63 AMG S.

Built largely around the current C-Class’ modular architecture, the GLC gets longer wheelbase and wider tracks. The bigger wheelbase means the GLC will be able to offer more generous interior accommodation for its five passengers, better matching its rivals in therms of space.

Commercial debut for the regular GLC is slated for September with the unveiling of the new Mercedes-Benz GLC 63 AMG expected to take place sometimes next year.