How will Mercedes-Benz build an autonomous car ahead of BMW?

Mercedes-Benz and BMW put an end to their partnership for the development of self-driving technology. But each of them are working separately to build an autonomous car. Mercedes should be ready by 2024.

Following an amicable split from BMW, Mercedes-Benz has teamed up with NVIDIA. The American corportion is a world leader in accelerated computing. It is also one of the co-developers of Sony’s Vision-S electric car concept.

The artificial intelligence-based infrastructure and the in-car computing system should become available across the entire range of the premium car maker starting 2024. Which model will be the first to receive it remains to be seen. It is very unlikely that the new generation of the S-Class flagship will have it implemented, as the technology would not be ready in time. The car system though should allow such updates at a subsequent date.

Mercedes-Benz and INVIDIA building the autonomous car together

The NVIDIA Drive platform features that enable advanced automated driving will be standard equipment on various Mercedes-Benz models. Therefore, the company’s vehicles will become autonomous cars one by one. They will be capable of fully automate regular driving routes from an address to another. 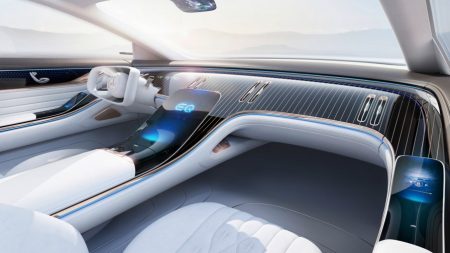 “It’s the perfect partner for us given its long record of innovation and our strong technical relationship,” says Jensen Huang, founder, and CEO of NVIDIA. “Together, we’re going to revolutionize the car ownership experience, making the vehicle software programmable and continuously upgradeable via over the air updates.”

“We are delighted to be able to extend our cooperation with NVIDIA,” Ola Kallenius, Chairman of the Board of Management of Daimler AG and Mercedes-Benz AG added. “This new platform will become an efficient, centralized, and software-defined system in our future Mercedes-Benz vehicles. NVIDIA’s AI computing architecture will help us streamline our journey towards autonomous driving.”

NVIDIA and Mercedes-Benz have worked on a common project before. The car maker used the NVIDIA GPU systems in the latest generation of its EMBUX infotainment system.