The first surprise: the large central screen of the multimedia system is not that big. It has 12.8 inches and not 20 inches as it was circulated. Standard, it is a TFT screen and optionally you can order an OLED screen with a resolution of 1,888 x 1,728 pixels that offers exceptional visibility regardless of whether it is in the sun.

Mercedes says there are 27 fewer physical buttons than in the previous generation, mainly due to the fact that almost all air conditioning controls have been transferred to the touch screen.
The only physical control remained for the air speed which is located at the bottom of the screen along with a few other classic controls. But as we anticipated, the touch controls of the air conditioning always remain at the bottom of the screen no matter what submenu is displayed.

Another important novelty is that the multimedia system offers new methods of authentication. In addition to the classic PIN, the user can also authenticate with the fingerprint (touch button next to the hazard button), facial recognition (optional with two cameras included in the driver display) and voice recognition. Up to seven different profiles are possible in the vehicle.

Other classic physical buttons are for adjusting the volume of the audio system (bottom right) and changing the running modes (bottom left).

The submenus and graphics are similar to those of the former generation MBUX but now the portrait format, for the first time at Mercedes, allows the display of submenus on two lines. 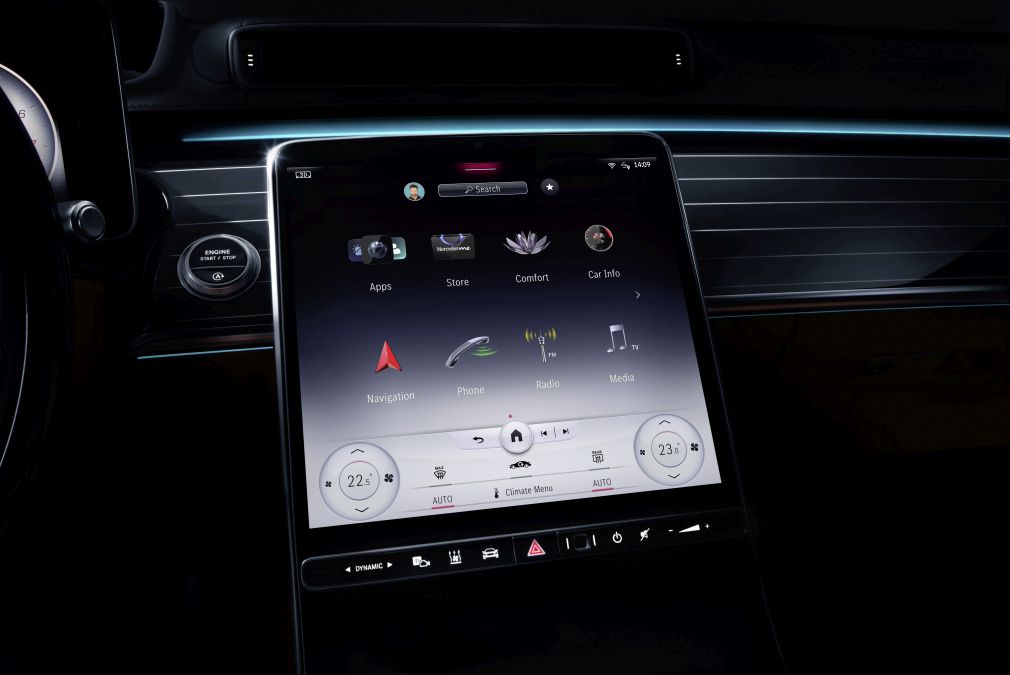 The driver display in 3D format can be individualized with a choice of four display style (Discreet, Sporty, Exclusive, Classic) and three modes (Navigation, Assistance, Service). The Exclusive mode is specially developed for the S-Class and presents the dashboard indicators in a slightly retro shape.

The MBUX Entertainment rear system comes with two touch screens in the rear and a tablet in the armrest. Mercedes has not yet given details about their configuration but has officially announced that they are interconnected with the multimedia system in front.
For example, the rear passenger can change the contents of the display on the center screen, which takes over, for example, the navigation destination he entered from the rear seat. Screen content can be easily and quickly shared with other passengers.

Hey Mercedes now supports 27 languages with natural language understanding.  Mercedes says you can even start a dialogue with a real person. Also, various electronic home systems can also be linked to the vehicle and voice controlled to the smart home function.

A number of commands are now available through voice control or gestures. For example, the heating, ventilation or massage of the seats can be activated by voice control and the sunroof can be opened by a simple gesture with the hand.

The second generation of the MBUX multimedia system has 16 GB RAM, a 320 GB SSD and can be upgraded over the air.