How the Mercedes-Benz trucks dashboards have changed throughout the years

The years have changed the way we drive, the way we travel, the way we transport goods. The advancement of technology and safety have reached the Mercedes-Benz trucks just as any passenger car. How did the dashboard of the trucks looked in the 70’s and how do they look now?

Very slender steering wheels, metal sheet painted in bright colors and dials that seemed mechanical. This is how the interior of the short-bonnet trucks looked about six decades ago. But the years have passed and have changed the interior of the Mercedes-Benz trucks as well. Better ergonomics, easy operation and networking have found room onboard. 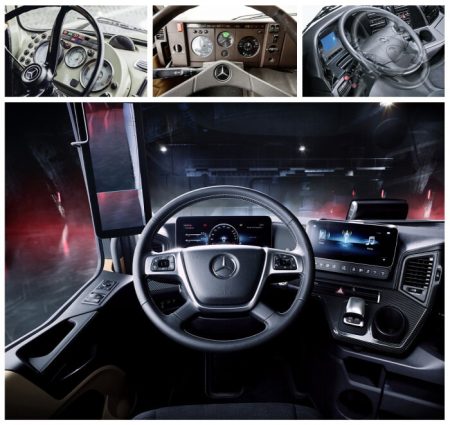 An old photograph reveals the interior of a Mercedes-Benz 1924 from 1972. It rolled with the ever-lasting OM 355 “Africa engine”. Right next to it, there is the so-called Leichte Klasse (light class) concept dashboard. Mercedes was attempting to achieve better functionality with a new approach of the driver’s workplace. The predecessor of the Atego truck drove out the gates of the factory between 1984 and 1998.

Another photo reveals the interior of a Mercedes-Benz 1317 tractor unit built in 1989. It came with brown tones and few switches, but also with the warning lamps on the upper edge of the dashboard.

When modern Mercedes-Benz trucks rolled off the assembly line

The second generation of the Mercedes-Benz Actros was a revolution in 2003. A driver’s airbag showed up, plus superior ergonomics. The cabin was somehow built around the driver, allowing him to individually configure various functions as desired and brought all dials and switches in his field of operation.

2018 brought the almost fully digital workplace. The fifth generation of the Mercedes-Benz Actros received the Multimedia Cockpit, that integrated two high-resolution configurable screens instead of the traditional instrument panel.

Besides, there is the MirrorCam system that replaces the conventional rear-view mirrors, making the truck safer and easier to drive.