How Lewis Hamilton won at Silverstone with a flat tire

There was a massive drama in Silverstone in the last two laps. Both Mercedes-AMG Petronas drivers suffered a puncture when they were at the front.

Everything seemed just right at Silverstone for Mercedes-AMG Petronas. Lewis Hamilton and Valtteri Bottas had locked the first row of the grid and they had just the perfect start. Meanwhile, Red Bull’s Max Verstappen and Ferrari’s Charles Leclerc were fighting for the third spot.

The only exciting moments of the race were those when the Mercedes-AMG GT R Safety Car was deployed on the racetrack. Teams called their drivers for an early tire change. 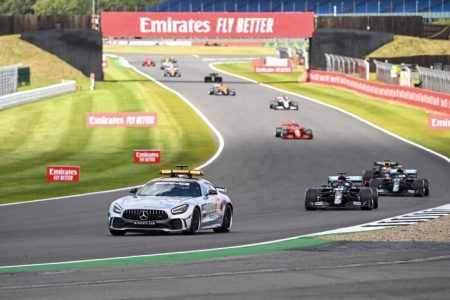 Things seemed quite clear, with Hamilton in the lead and Bottas rolling on behind him. But the Finn suffered a puncture of the left front tire two laps before the end of the race and struggled to reach the pits.

Max Verstappen and Charles Leclerc easily went past suffering Valtteri Bottas. The Dutch from Red Bull chose to pit and switch to soft tires to claim the fastest lap. It was though a decision he eventually regretted. Lewis Hamilton, who was in the lead, suffered a puncture a lap before the finish line and crawled to the end. From the half-minute lead, the Brit had less than six seconds ahead of Verstappen.

It was Ferrari’s Charles Leclerc rushing to the finish line behind the two. The other Ferrari driver, Sebastian Vettel, in his last season driving for La Scuderia, ended up in the 10th position. He thus snatched a point.

Formula 1 remains in England for the second race in Silverstone and the 5th of the season.

Lewis Hamilton leads the overall standings with 88 points, followed by Valtteri Bottas with 30 points less. Mercedes-AMG Petronas is at the front of the Constructors’ standings with 146 points. Red Bull Racing stands second with 78.