The Mercedes-Benz Actros trucks left from Stuttgart, Germany, to reach their destination. Two of them were four-axle heavy duty trucks with 650 horsepower each. The delivery took place during the coronavirus crisis, despite the restrictions imposed by the pandemic.

The Paule company from Stuttgart had precisely planned the heavy-duty transportation for months. The order had come from Maschnenbau Scholz GmbH & Co. KG in Coesfeld. Its mission was to transport a gigantic autoclave, a gas-tight pressure tank for “baking” carbon parts. The operating pressure of the tank was of 12 bar and its temperature was of 250 degrees. The distance they had to drive was of 33 kilometers, from the headquarters of Paule in Germany’s North Rhine-Wesphalia, all the way to the dock on the Datteln-Ems canal in Ludinhausen. 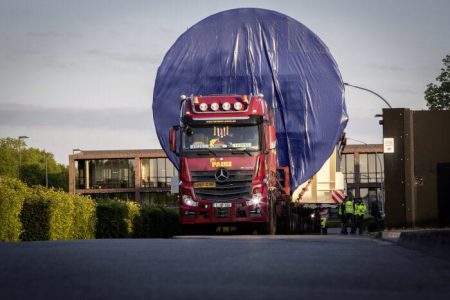 The specialists lashed the load to a coupled platform semitrailer with 22 axles. To make the load stable, the incline had to stay below an angle of five degrees. Otherwise, a single degree more and the tank could simply tip over.

The mission involved two four-axle heavy-duty trucks of 650 horsepower each. They transported the autoclave, while other two trucks took the twenty-tonne lid and other accessory parts. Each of them measured a width of approximately eight meters. They had to arrive at the inland water vessel that was subsequently to carry them to Rotterdam. From there on, the transport would take place by sea.

Mercedes-Benz Actros trucks in trouble at a junction

The giant rolled out of the factory premises at 10 p.m. One of the heavy-duty trucks pushed it, while the other one pulled it. The journey of the colossal convoy lasted for three hours before a forced stop at kilometer 22. A 90-degree junction challenged the transporters even more. In order for the trucks to be able to pass, verges were graveled and then covered with plastic panels. And still it needed more work. The towing vehicle could not find enough traction on the plastic panels. 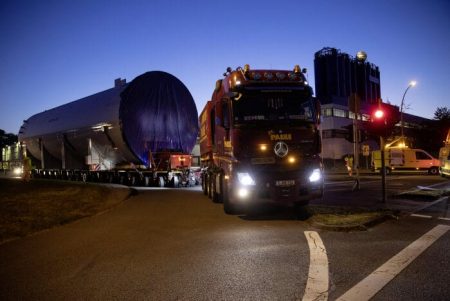 The driver of the pushing truck had to make a detour of several kilometers, drive around and then in reverse for two kilometers to reach his company truck.

Specialists coupled the trucks one to another and they were eventually capable of coming out of the predicament. The pressure tank reached its destination after six hours on the road.