How did they dare bother the king? Brabus 800, challenged by modified minis and compact cars

They challenged the king, the Brabus 800, and His Majesty accepted the challenge. That happened even though “he” knew exactly what “he” is getting himself into. A war that opponents don’t stand a chance in.

The Brabus 800 is actually a W222 in the Mercedes-AMG S 63 4MATIC+ variant, that the tuning house worked its magic on. As its designation claims, it comes with 800 horsepower and 1,000 Nm of torque, provided by the 4.0-liter twin-turbo V8 engine. It transfers resources to both axles through a nine-speed automatic transmission and an all-wheel drive 4MATIC+ system.

It may seem like a luxury high-performance saloon. But it can apparently rule not only the streets, but the drag strip as well. Figures are in “his” favor. Just 3.1 seconds from zero to 60 mph and a top speed of 300 km/h. 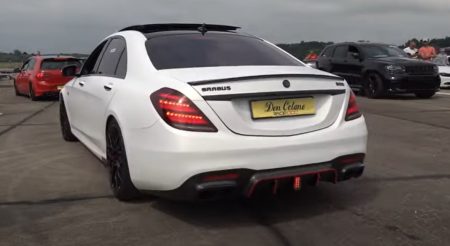 Brabus fitted the car with the PowerXtra module, so that explains the new capabilities. The “800” put them on display at the Race 1000 event, that took place in Neuhardenberg, Germany.

The contenders had no chance with the Brabus 800. Who started it anyway?

The first contender was a 400-horsepower Toyota GR Yaris. A 500-horsepower Volkswagen Golf GTI Mk5. No surprises here. The engine of the Brabus 800 roared, the car started off and it seemed that would it the mini and the compact car for breakfast. Luckily they survived with only their honor crushed. With tweaks and very high expectations, they really thought they wouldn’t make a fool of themselves. Well, the King put them back into their place. But after all, who started it anyway? It wasn’t the Brabus who challenged them.

You couldn’t have missed the fact that a special number plate took the place of the usual registration plate. And it reads “Don Corleone”. A king in his very own way.