How can a Mercedes-Benz E-Class be converted into its facelift version?

Elena Luchian, June 9, 2020
6.5K 0
Home Auto news How can a Mercedes-Benz E-Class be converted into its facelift version?

A car enthusiast from Georgia bought a Mercedes-Benz E-Class W212 that had been used as a taxi in Germany. Now it is nothing of what it used to be. It became the facelift version.

The car had run almost half a million miles already. It was not new by any means new, but the new owner felt it deserved a second chance. Now the sedan is impossible to recognize.

With a 2.1-liter engine developing 136 horsepower operating under the hood, the diesel E200 had lived its heydays. But the young Georgian believed it had more to give on the roads of his country and totally transformed it. 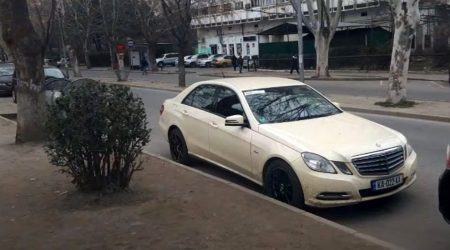 When he bought the Mercedes-Benz E-Class, the only issues were some minor oil leaks. He immediately solved without much of a headache. At first, he thought he would keep the car as it was, except for the wheels. The 16-inch ones flew off and new larger ones replaced them.

The owner eventually decided that beige leather would look so much better on his sedan. So he also replaced the former black leather, that was slightly worn out.

There was still something wrong about the car and he finally realized. The German taxi-typical paintwork had to vanish. So he wrapped the vehicle in red.

He eventually chose a chromed radiator grille for his E-Class that was starting to look like an AMG variant. He was by no means going to stop. An AMG body kit brought the car new bumpers, an eye-catching front splitter, a tailwing and rectangular exhausts. 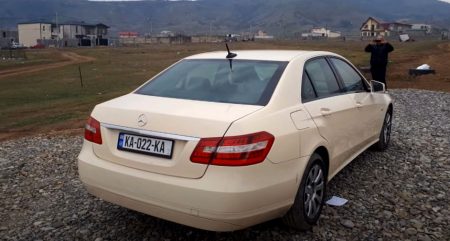 But still it felt like the automobile had more potential. So he decided that it should undergo a facelift operation. He peeled off the red wrap and replaced it with real red paint. New 18-inch wheel were next in line. He clipped off the roof, equipping a car with something that would be quite expensive if ticked in the configurator of the new car: a sunroof.

Double exhausts, new thresholds, a brand-new diamond-patterned radiator grille found their way onto the car, while new facelift LED headlights replaced the former ones with a double layout. 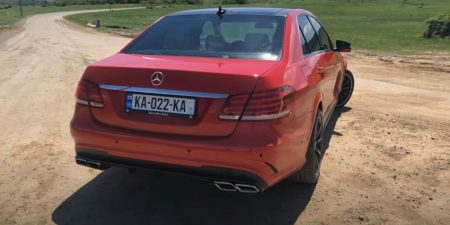 How much did the conversion of the Mercedes-Benz E-Class cost?

The young Georgian did not even cipher out the total amount of money invested in the car. He though tells that in Georgia such a conversion would be anywhere between $40,000 and $70,000. It is the kind of money with which he could get a newer original Mercedes-AMG E 63, which he eventually did. He also intends to keep the converted E-Class just to demonstrate that it is possible to go that far.