Strange are the affairs of the cars’ conversion. A Mercedes-Benz SL and a Cadillac Eldorado became the Benzillac, probably the ugliest custom-made automobile ever built.

Frankenstein’s looks seemed friendlier than this. The Mercedes-Benz SL and the Cadillac Eldorado made perfectly eye-catching vehicles as themselves. Now they are eye-catching all right, but for all the wrong reasons. They became… the Benzillac. 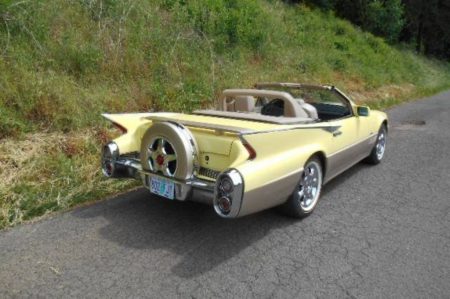 The old-school models, stylish and innovative in their times, this 1994 SL and his 1960 Eldorado companion have grown old together… literally. The Benzillac has the front end of the SL, but the pastel yellow paint would definitely raise some eyebrows. Who would get that kind of paint for his starred classic roadster?

It turns out though that it is not what it seems, as a different car begins where the other one ends: with the end of the doors. The rear wings, rear end and taillights come straight from a Cadillac, with the spare wheel and chrome accents typical to the Eldorado. 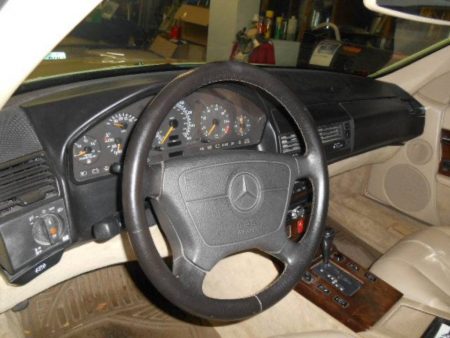 And there is an answer for all the “Who would do that?” type of questions. It is a company from the state of Oregon, USA, Sloan’s Custom Body & Paint. The creature seen today was made many years ago and it has surfaced online these days. Meanwhile, Sloan’s shop was permanently closed. Maybe it is better this way, we’d dare say, hoping that such car conversions will never see the light of day again.

Why has the Benzillac shown up these days?

There is a reason for this as well, of course. It is because the owner is selling it. He’s had enough of it. He lets those interested know that the odometer of the vehicle reads 220,000 miles. He claims that the Benzillac is “best of both worlds”. Hopefully not. The price is of $7,500. We again would dare ask: given in order to get rid of the monstrosity or asked for?