All-grown up and daring as hell, the all-new Mercedes-Benz A-Class stars in the first video. The trailer takes two cars onto winding roads, displaying the sleek design that boasts the highest coefficient in its class, but also the high-tech infotainment system.

The first video of the Mercedes-Benz A-Class hot hatch is a less-than-two-minute summary of everything the car is capable of doing.

“Hey, Mercedes” is all the drivers need to say to get the information they need, provided by the brand-new MBUX infotainment system, to send messages, to get in touch with others and to reply. It is the first car to get the futuristic system. It thus comes to revolutionize interior design and the industry, in terms of safety features, as it now receives functions borrowed from the upper class models. 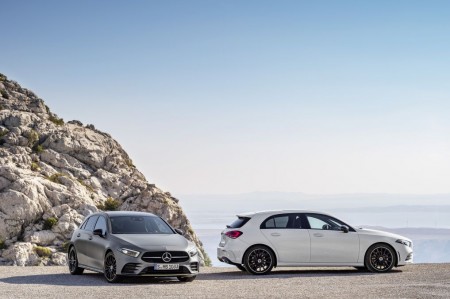 Longer and wider, the A keeps its athletic and dynamic DNA, but is comes as a step forward in terms of practicality as well, as it also offers a bigger boot and space that the occupants had never had before.

All models of the new Mercedes-Benz A-Class (2018) are also powered by new, efficient diesel and petrol engines. Find out all there is to know about the compact car of the next generation right here:

OFFICIAL: this is the new Mercedes A-Class