All-new Mercedes-Benz C-Class Coupe has already been put through its paces, ahead of its September Frankfurt motor show debut. Autocar presents the world-first passenger ride.

And the Britons seem to love what they’ve sampled revealing that the new two-door looks terrific in the flesh. The new C-Class Coupe seduces with its more athletic proportions, leaning heavily on the gorgeous C-Class saloon for styling inspiration even if the overall appearance is quite reminiscent of that of the recently introduced S-Class Coupé.

The resemblance stops from the A-pillar onwards with unique detailing such as the long frameless doors, fixed B-pillars, a heavily plunging roofline, prominent hunches over the rear wheel arches, a generously tapered glasshouse, acutely angled rear window, high-set bootlid, horizontally mounted tail-lights and trapezoidal tailpipes integrated into the lower section of the rear bumper. Quite an impressive list, right? But it doesn’t end here.

The interior also gets a subtle makeover. The fascia remains unchanged though. Among the fresh bits we find newly developed shell-style front seats with integrated headrests that are mounted 20mm lower than before and a belt-bringer mechanism. In the back, Mercedes-Benz C-Class will offer two individual seats separated by a centre console, effectively making it a two-plus-two. According to Autocar, you immediately feel more encapsulated in the new two door than you do in its four-door sibling, further adding to the overall feeling of sportiness. 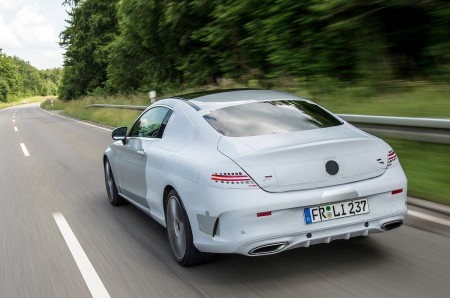 Initial impressions of the aural qualities and dynamic potential of the new car are encouraging, too. The prototype tested is a mid-range C300 Coupé model. It runs a turbocharged 2.0-litre four-cylinder petrol engine tuned to deliver 241bhp and 273lb ft of torque.

From the passenger seat, at least, the new C-Class Coupe feels and sounds more spirited than the latest C-Class saloon with which shares its mechanical package. Mechanical refinement and overall suppression of road noise have also been improved at typical motorway cruising speeds, further enhancing the aural qualities of the tuned exhaust.

The new C-Class Coupé hides its C-Class roots well. Yes, the modular MRA (modular rear architecture) underpinnings is essentially the same as the latest C-Class’ saloon, but with the lower kerb weight makes it far more brisk and smooth under heavy acceleration. And the explanation is simple. Mercedes-Benz has fitted the new two door with uniquely tuned springs and dampers. The revised suspension has been lowered by 15mm, giving the C-class Coupé a lower centre of gravity than C-Class saloon while the two-door is also blessed with larger diameter anti-roll bars and firmer bushings. All in the name of pure sportiness! 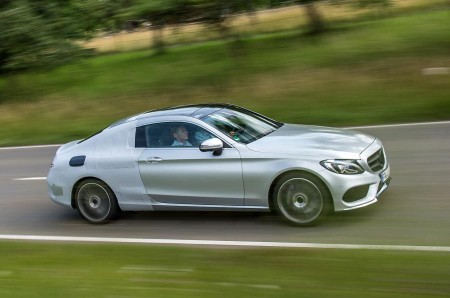 If we are inclined to believe everything Autocar says, then we can only conclude the upcoming C-Class Coupe is destined for greatness.