A transformation per season seems to be the rule for HOFELE Design, that has just put the company’s touch on a Mercedes-AMG GLS 63, two months after transforming a GLS 400 4MATIC.

The ‘Special Edition’ GLS 63 received the HOFELE-typical exterior and interior elements, a treatment that the house calls BESPOKE. The owner demanded a unique combination of aggressive sporty design and ultr-high luxury interior, which he actually received. On the inside, the car was fitted with the Aston Martin Chancellor Red Leather trimmed in a Maybach style. So the owner will now sit in the seats wrapped in red perforated and quilted nappa leather with double diamond stitching, which has, in time, become a HOFELE trade mark. 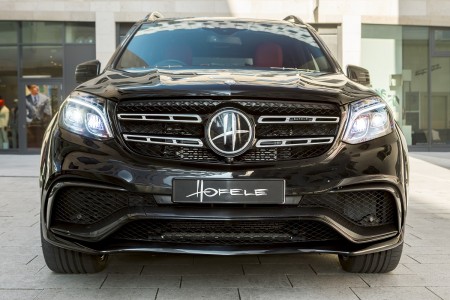 It was customization at the highest level, as the owners initials have also been embossed in the headrests. The bright red seats create a head-turning contrast with the glossy black exterior.

The flared wheel arches were treated to custom carbon finishes, while the SUV proudly stands on 23-inch wheels. The front bumper and the rear exhaust, as well as the rear spoiler, have also been altered to look more fierce. 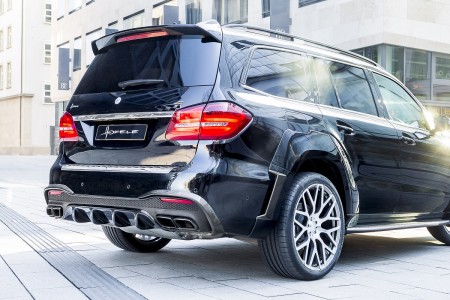 And it is not just the looks that HOFELE converted, but also the exhaust system, which received an advanced exhaust control valve, making the V8 biturbo roar like a wild beast.

HOFELE is a German Tuning company specialized in Mercedes-Benz-made vehicles, that has been on the market for over 30 years and is now developing an entirely new range of exterior and interior enhancements for many of Stuttgart’s current and future models. In the near future, HOFELE will send into the world their new take on the new G-Class.