Yes, this actually happened. Hofele really fitted the Mercedes-Benz G-Class with suicide doors. It thus becomes the first Benz with doors that open into opposite directions. No, it is not a series production model.

Hofele borrowed the suicide doors idea from the Rolls-Royce models to make the Mercedes-Benz G-Class look even more exclusive. Now what came out of their hands bears the name of the Ultimate HG and it comes with a comprehensive series of upgrades.

Of course, the cherry on top are the suicide doors. The tuning experts relocated the rear retro-style door handle next to the front one and closer to the B-pillar. It looks every inch like it came off the assembly line in Graz, Austria, just like this. 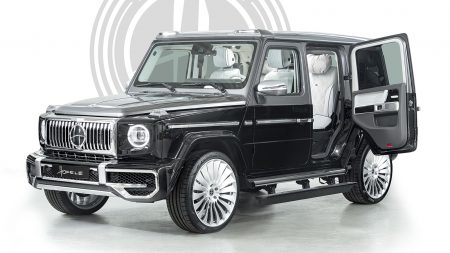 And there is a long list of modifications on the off-roader. Hofele fitted it with gigantic 23-inch turbine-style wheels. A redesigned front bumper and a resphaed radiator grille with chrome finish and vertical slats, similar to those of the AMG models, have found their way to the front end of the iconic vehicle.

The G-wagon also gets a a two-tone paint scheme. The hood, roof and pillars are in silver, matching the chrome bars on the doors, while the rest of the body displays a black paint.

Two LED light units showed up on the roof and there are electrically-operated steps on the sides. They make access onboard the high-ride vehicle easier. 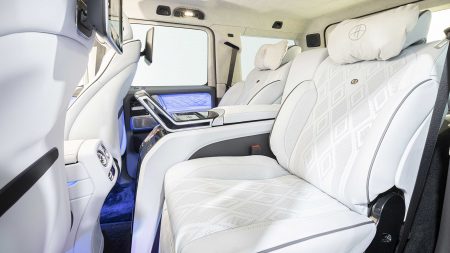 The cabin of the model model also underwent a major makeover. The upgrades list include seats in white perforated leather with headrests pillows for the rear passengers. They are part of the heated, cooled and reclining individual seats that resemble those of the Maybach variants. A customized center console with a touchscreen showed up between the rear seats, so the passenger can control the infotainment system.

The Hofele Design logo found room on the backrests and headrests, as well as on the front and rear end to remind the curious eyes that they are looking at a special model.