Hidden for 50 years. An original Mercedes-Benz 300 SL, looking pathetic, sold for a fortune

It may look pathetic, but it is still a treasure. An original Mercedes-Benz 300 SL Roadster has been recently found after having been hidden away from the eyes of the curious, and eventually sold for a small fortune.

The car was bought for $800,000. It may not be much for the collectors, but the shape in which the car was found should be considered. It was covered in dirt and rust when discovered and eventually sold by the Beverly Hills Car Club in California. The owner of the car club, Alex Manos, says such cars are hard to find even in this condition. He managed to track down the history of the vehicle. It was not that complicated, since it was found with the original documents, invoice and maintenance book included. 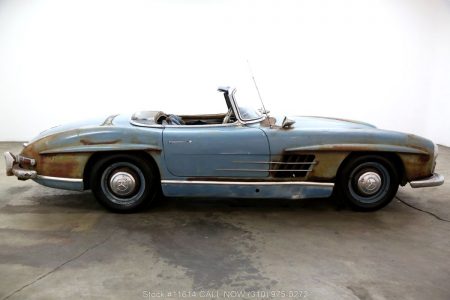 The automobile seems as if it has lived its life abandoned. The body and the once-chromed parts, as well as the engine were rusty, while the upholstery had been torn. The odometer shows 121,713 kilometers (75,629 miles), so it surely had its heydays on the road.

The first Mercedes 300 SL Roadster exported to the U.S. market

The buyer that paid almost a million US dollars to snatch it from other classics enthusiasts is aware that his new old car needs a major makeover. The poor condition was far from being a deal breaker though. An original Mercedes-Benz 300 SL in a decent condition should sell these days for approximately double that price.