Mercedes has just invented the luxury pick-up. Why have they done it? Because they could and because they plan on selling volumes of such “useful” vehicles worldwide, from this moment on.  Have you sensed the irony in the name? A… luxury pick-up (lorry)? That comes after we have been caught in a snare for the past 20 years and we’ve allowed ourselves to be deluded by the car makers that we necessarily need SUVs – for traveling by an off-roader in the city…

Still, it is a marketing study. Mercedes knows you are a supercilious and that you, a farmer or a forestry engineer, want to have full access to the parcels that you administrate at the end of some rural dirt roads, by a premium vehicle, so that all your neighbours know that you have arrived. You cannot tow a 3.5-ton agricultural vehicle or load in the truck’s bed 1.1 tons of construction material (or maybe veggies), unless you do it in style, in alligator-leather cowboy boots, with a gold watch, casually supporting his adorned wrist against the finest leather and resting his behind in a massaging seat. How would you not take your delight with the finest of woods and with the big-sized TFT display that decorates the dashboard, tiredly crushing, in one corner of the mouth, an (ebony) toothpick, while the building materials store boy loads the bags of cement into your truck bed? Pfff, how were you ever able to survive without all these?!? How could even supervise your flocks from inside a wretched Toyota?!? There comes the Mercedes to spare you the shame. 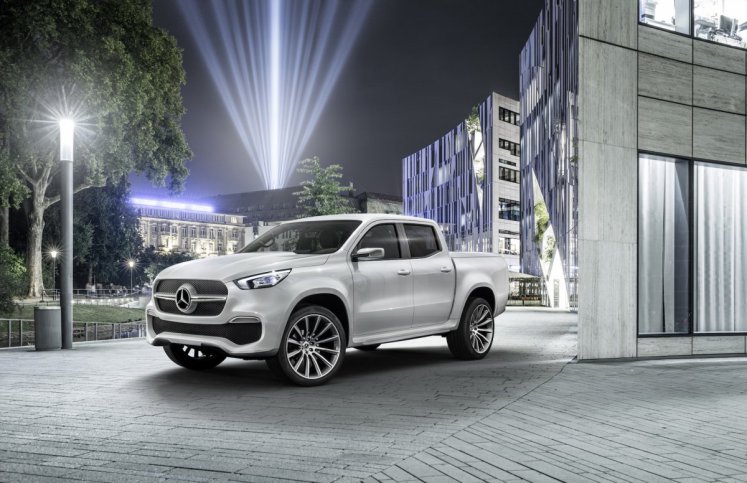 Putting jokes and pamphlet aside, the target of the new Mercedes X-Class is by no means the one displayed above. As the target group for the SUVs hasn’t been one made of hunters, fishermen, mountain rescuers or border guards for a long time. The luxury SUV has become a symbol of the social statute, as the luxury pick-up has turned into the exact same thing. Actually, in North and South America and even in the Arab world, the stately pick-ups made in the U.S.A. have long been the symbol of financial power and of the determination held by those who overcome any obstacle on the road to victory, no matter what victory may mean. Whether we like it or not, this is how things are… this is what we are! And Mercedes knows it, it has reckoned and the aftermath was on their side. The world needs a luxury pick-up, because there is a promising market break-through, that must be harnessed. Especially because this (utility) vehicle category is skyrocketing – by 20% per year – and brings fabulous profit to the manufacturers. 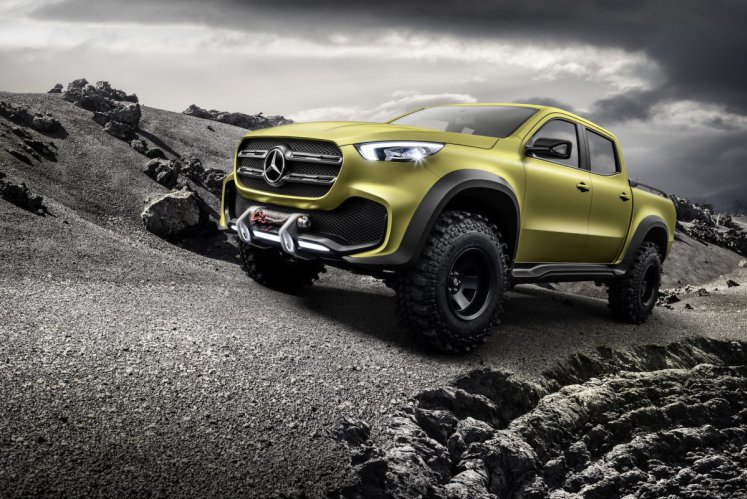 It is so that the German manufacturer has satisfyingly announced that it has just given birth to a new segment, with the presentation of the two variants of the X-Class concept – the Stylish Explorer and the Powerful Adventurer. The main markets the new pick-up targets are Brazil, Argentina, Australia, New Zeeland and South Africa. The X-Class will also go on sale across Europe, where it is expected to enforce a new tendency, but, ironically, not in the United States, where there is a stinging market of 25% imported pick-up trucks. Naturally, at a certain time, Mercedes might decide to populate this serious opponent for Ford, Chrysler and GM, manufacturing it in the company’s US-based plants. And I predict that it shall happen. 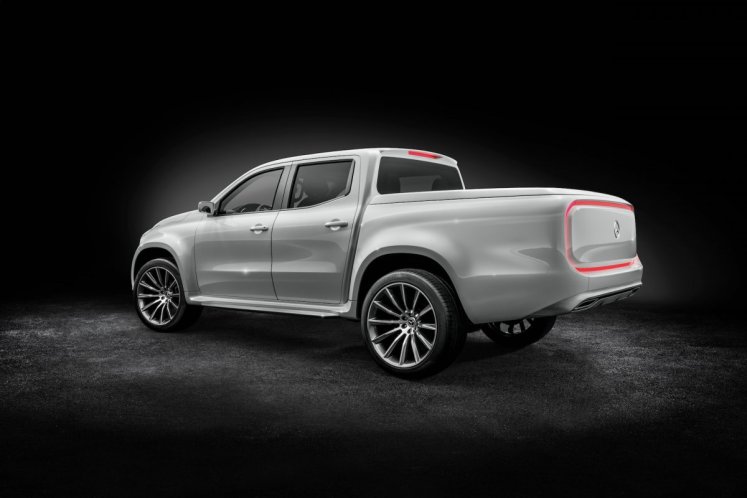 At the launch event, the Mercedes Chairman, Dieter Zetsche, stated that the X-Class fills one of the final gaps in the German manufacturer’s portofolio and that it is aiming to provide customers with vehicles that cater for their specific needs. The X-Class – he added – shall set a new standard in this ever-growing segment.

Is that clear enough for you? It is for me: customers felt the need to have a luxury pick-up and now Mercedes is providing it. Haven’t I told you it is not an adventure in an uncharted territory, but well made-marketing study?!? 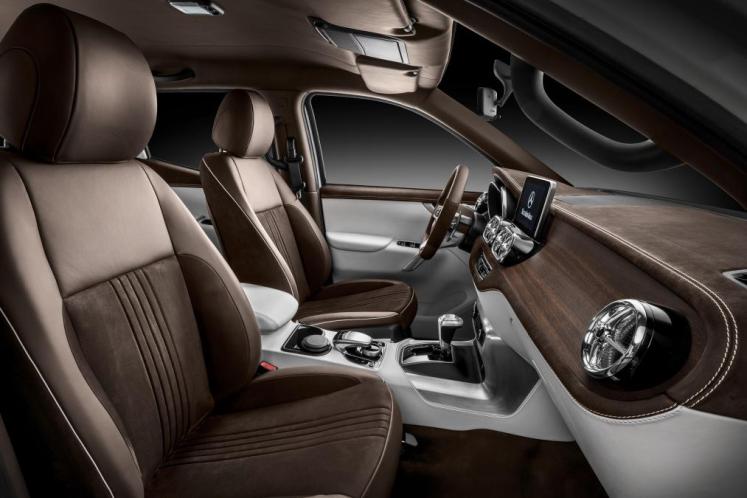 But let’s though tell of the vehicle, which is pretty, elegant, high-tech, imposing (too bad it’s got a bed) and very cool… that’s if you are a millionaire surfer or an Emirates-based sheikh, fed up with getting of a Maybach again and again to play among sand dunes in a Nissan Navara. But wait a minute! Sheikh, you will still be playing in a kind of Navara, it is just that it bears the Mercedes logo and it shall be waaaay more luxurious. Because the Teuton pick-up is underpinned by the Nissan Navara platform and manufactured in the Nissan plant in Spain. Or maybe I should say that it is built on the technical platform of the Renault Alaskan, in the Renault plant in Argentina. In fact, both statements are valid. 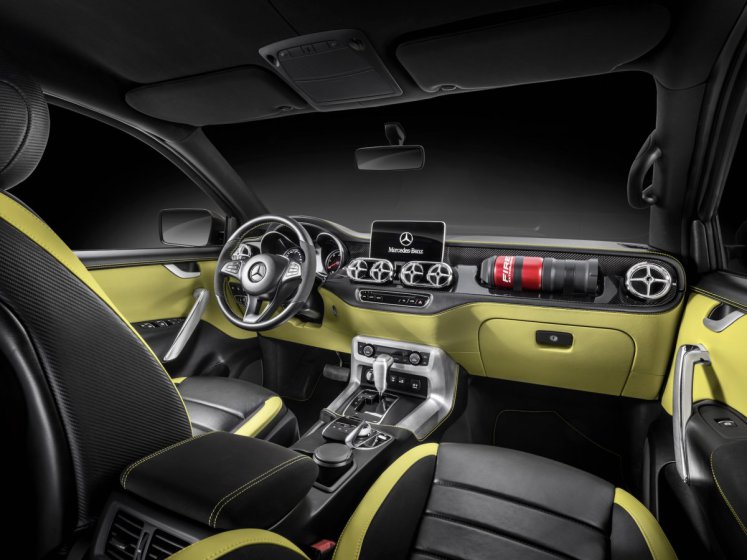 Apart from its popular siblings, the Mercedes shall bring top equipment lines, generous space for 5 adults, a V6 turbodiesel engine that has been widely announced as the new segment benchmark (technical data not yet announced), 22-inch wheels and permanent 4MATIC permanent all-wheel drive coupled with a high-end traction control system. As previously suggested in the beginning of the article, the towing capacity of the X-Class is of 3.5 tons and the bed loading capacity is of 1.1 tons.

My take on it is that it shall mostly tow motor boats and shall feature golf club loads, because such is the „freight” of the potential customers. Congratulations, Mercedes, for a new  bewitching and – I am sure of it – historical automobile! I am 100% sure that it shall sell like hot cakes worldwide, because the market for it has been correctly singled out. My prediction is that shortly opponents from BMW, Audi etc. will see the light of day…

For a extensive photo gallery, head over to Motor Test!