“Help, my car is drowning!” – Dutch driver takes his Mercedes into the swamp

„Help! My car is drowning!” This is how an emergency call sounded like on a foggy night in the small town of Delfgauw, Netherlands. On a rainy night, a young unexperiened driver took his Mercedes-Benz E-Class Estate straight to the bottom of the swamp.

Not much to see since the car was already half-way drowned when the police, the firefighters and the media arrived. The reckless young man climbed up the car and swam his way back to the shore unharmed. But we cannot say the same about the car. The vehicle was less fortunate. 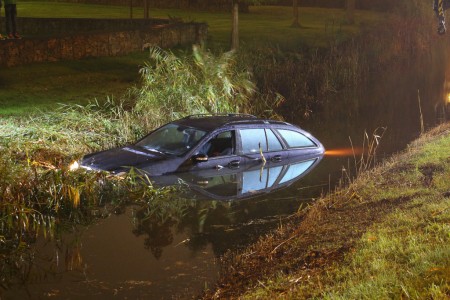 When the police arrived at the crash scene, the electrical system of the vehicle was still working and the lights were still on, even though the light units were full of water. On the grass, the traces of the tyres showed the exact route of the vehicle right before it ended up under water.

Rain and strong wind did not make the car rescue operation any easier. Neither did the vegetation around and in the flooded ditch. A brave worker managed to jump in and tie the car to a towing truck and then the E-Class was dragged back to shore, while waves were running down from every joint. All witnesses flashed their cameras to capture the once-in-a-lifetime moment that happened in an 8 000-resident town where nothing ever happens. 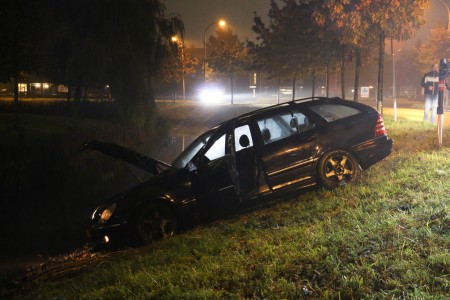 The Benz was then lifted up on the tow truck platform and taken to the mechanical emergency room, with leaves hanging and fluttering from under the radiator grille. The vehicle needs time to dry and obviously some parts transplant, but other than that, it will be back on the road in no time. The Mercedes-Benz cars are not made to drown, but they are not meant to swim, nor float either. The driver should keep that in mind.