The British publication AutoExpress has conducted a comparison test between two of the most frugal premium cars that companies and executives are targeting. The new Mercedes-Benz C220 BlueTec on one hand, and the Audi A4 2.0 TDI ultra on the other hand. Which one is better for the brits?

This generation of Audi A4 is nearing it’s lifecycle end, and the facelift or the interior design can’t hide this, especially if we compare it to the fresh Mercedes-Benz C-Class, that has a huge advantage in terms of modern stance and technology. The newcomer gains more points for it’s luxurious interior and a more advanced COMMAND system. It gets a bigger touchscreen and and newer and clearer mapping and graphics than Audi’s MMI.

But this match is all about fuel economy. This could be a fight between two avaricious managers, because both cars are expensive. The new C-Class is a little more expensive than older A4. But there’s not a huge difference. So why should we care about fuel consumption? Well, any manager will tell you that running costs of a car are becoming more and more important. 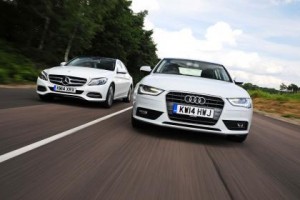 The C220 BlueTec has clear advantages over A4 2.0 TDI Ultra – the Mercedes is the newcomer

Both cars have start-stop tehcnology and different gadgets to help drivers saving fuel (for example, the eco display on the C-Class screen, to help you drive more efficiently). The C-Class on this test comes with a 7-speed automatic and is rear-wheel drive, while the front-wheel drive Audi A4 has a 6-speed manual. This means the A4 2.0 TDI is more frugal, by 1.6 mpg.

However, with a manual gearbox and smaller wheels, the C 220 BlueTec is considered clean enough to be as cost effective as the A4 2.0 TDI Ultra for company car drivers. Furthermore, the new C-Class feels more inspiring to drive than the almost outdated A4, while the engines are both considered not too refined.

In the end, the british magazine chose the Mercedes-Benz C 220 BlueTec as the winner over Audi A4 2.0 TDI Ultra. The advantage of A4 in terms of costs and fuel economy isn’t significant enough, while the C-Class brings huge improvements in the luxury, new equipments and quality areas.