Harry Styles – His Car is Older than Him

He is surely not going to get rid of the paparazzi that are chasing him 24/7, in this car! Actually this might have the exact opposite effect. Harry Styles’ 1966 Mercedes-Benz 230SL is the automobile to draw attention and magnetize road-users, pedestrians and – did he think otherwise? – the media.

Harry Styles, the front man of the worldwide popular English-Irish boyband One Direction, is only 20 years old and his partner is 49. No panic, it’s not an older woman this time, but a car! The pop singer has been spotted driving his convertible Mercedes-Benz 230SL along the famous Melrose Avenue in Hollywood.

With the convertible that is more than double his age, Harry Styles cruises the boulevards of Hollywood for some photo and shopping. Famous also for his relationship with older women, he is definetely for the old school. But recently, the pop singer has been linked with the fashion model Kendall Jenner, one of the youngest of the Kardashian sisters, who are all – as mentioned before – crazy about the G-Class! 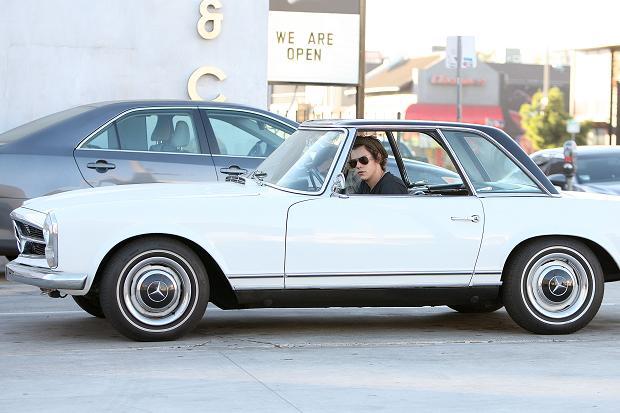 The Mercedes Harry Styles drives is more than twice his age

The „Up All Night” singer loves the retro vibe. His bright white classy convertible features a soft top and seats covered in black leather a bit more than he is covered in tattooes. And sometimes a fast food bag in the front passenger seat, stalkers claim. And he’s got plenty of those.

With a taste for the vintage and having a reputation of a massive car fan, the English also owns a glamorous red Jaguar E Type and a 1970 Ford Capri, which he occasionally posts on his private Twitter account. On the social network, the very popular singer, song writer and actor (actually he has only played himself in motion pictures so far) has no less than 18.9 followers!