It is called the founder of the E-Class lineage. Eight decades ago, the Mercedes‑Benz 170 V celebrated its launch on its way to become the best-sold pre-war Mercedes‑Benz passenger car. Now it’s time to celebrate its legacy. 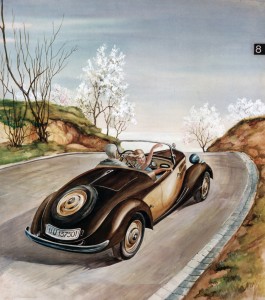 The “V” in the model designation was an abbreviation of “Vorn” (front), added in order to distinguish the new 1.7‑litre model not only from its predecessor, the 170, but also from its rear-engined counterpart, the 170 H.

Delivering 38 hp with its standing valves and updraft carburettor, the 1.7-litre engine M 136 had been developed from the 1.3‑litre unit in the rear-engined 130. Not to suffer any loss of refinement in comparison with its six-cylinder predecessor, the four-cylinder engine in the 170 V was mounted at two points according to the floating-engine principle, with the vibration axis passing through the centre of mass.

In February 1938, the 170 V was provided as standard with automatic intake manifold heating and valve seat rings for the exhaust valves.One year later, additional changes took effect as part of the continuous programme of model refinement. The innovations included a bypass thermostat to allow faster heating of the cooling water as well as improvements to both air filter and intake noise silencer. Also, the capacity of the fuel tank in the engine compartment was increased from 33 to 43 litres, this causing the cross-section of the tank to change from round to elliptical. In early 1940, having previously had synchromesh only on third and fourth gears, the 170 V was given an all-synchromesh four-speed transmission. 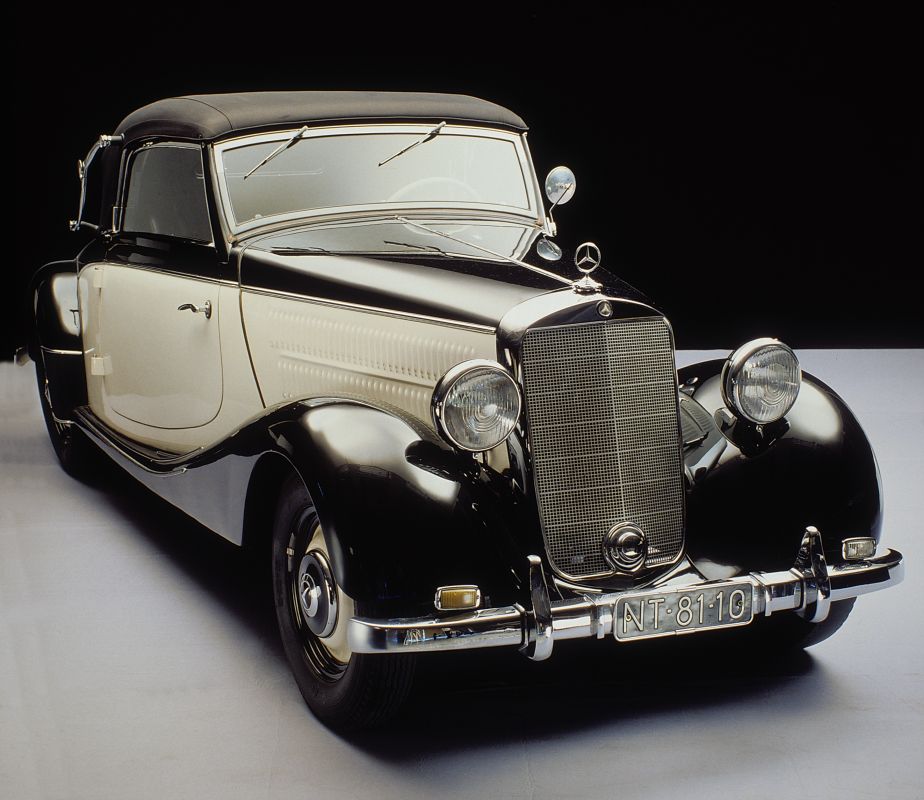 The backbone of the new vehicle was an X-shaped oval tubular frame designed according to a patent of Max Wagner. Despite a longer wheelbase, this new frame was some 50 kg lighter and also stiffer than the box-section frame previously used in the 170. The frame of the 170 V was sufficiently rugged to easily cope with the tough service environment as a Kübelwagen or panel van, where heavy loads werewas the order of the day. The front fork of the frame housed the engine, while the differential was accommodated in the rear fork. The front wheel suspension consisted of independently suspended front wheels mounted on two transverse leaf spring packages. Damping was by means of two piston-type shock absorbers. The 170 V boasted a rear swing axle with coil springs.

The 170 V was available in a wealth of body variants scarcely imaginable today. The range comprised: two- or four-door saloon, convertible saloon, two-door open tourer, Convertible B and two-seater roadster. A chassis-only version was additionally available for third-party coachwork or a special-purpose body. Most of the cars produced, and an even higher proportion of those that survive, were two or four door “Limousine”. 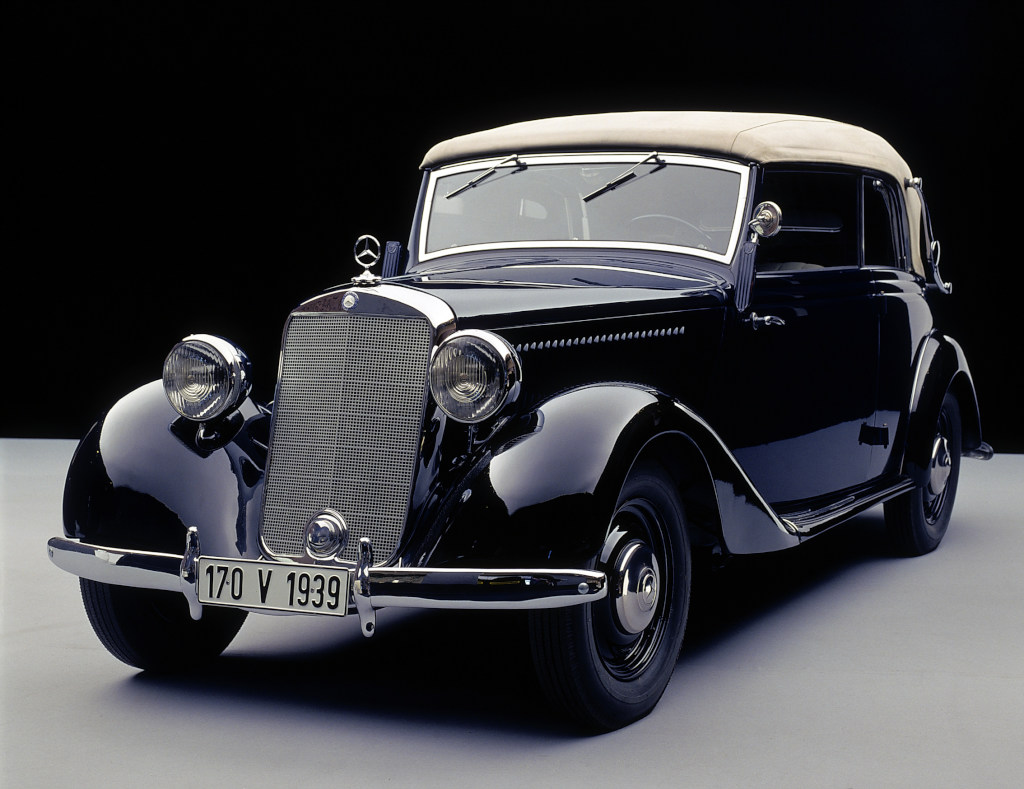 After the end of the war, passenger car production was resumed, starting with the proven design of the 170 V model (W 136). By the end of the 2nd World War, about 85% of Daimler-Benz production capacity was disabled.

The activity on the Daimler-Benz industrial site from Unterturkheim managed to resume on the 20th of May 1945. After rebuilding the facilities, the chassis, body and technique of the pre-war Mercedes 170 were taken as basis for the early post-war production.

Post-war vehicle production started in May 1946, with the Mercedes-Benz 170 V delivery van. This model was a genuine all-rounder. It was available as a convertible, pickup and even as an ambulance. The assembly of the Mercedes 170 V sedan (W 136) was resumed in 1947.

In May 1949, the models 170 D and 170 S, the first new Daimler-Benz passenger car designs after the war, were presented at the technical export fair in Hannover. The 170 D basically matched the 170 V, but was equipped with a 1.7-liter Diesel engine, which had been developed from the proven unit of the 170 V. It was the first Diesel-powered passenger car after the war and became the basis for the lasting success of this type of car. 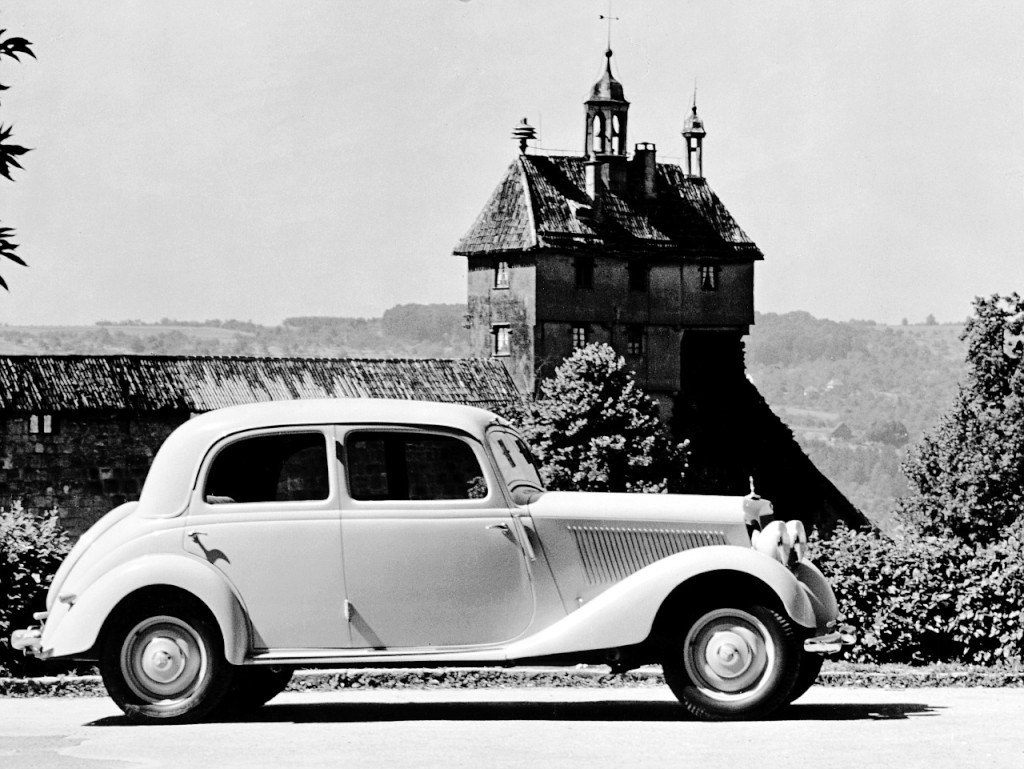 In May 1950, the 170 V and 170 D were reviewed and a whole range of measures was undertaken. The performance of both engines was improved by increasing their cubic capacity. The safety of the car was optimised by the integration of telescopic shock absorbers, an enlarged rear track width and stronger brakes. There were improvements, too, regarding passenger comfort: The seats had become bigger, the inner width of the passenger cabine was increased, the boot was now accessed from outside, which was far more comfortable, vents were equipped with covers in order to protect passenger from draught. In order to make it easier to distinguish these improved models from the originals, they were called 170 Va and 170 Da at Mercedes-Benz.

Upgraded versions of the pre-war Mercedes 170 came along during the next years, but everybody knew things should change radically and soon in order to secure the brand’s future. Hence, the new Ponton Mercedes (W120, W121).