You’ve only got a week or so until the private British auction house called Bonhams will begin to receive bids for a wonderful collection of old (and some very rare) Mercedes-Benz models. And it’s not about just the cars themselves, it’s also about their history.

There are 45 Mercedeses in total that will be having new owners starting the 29th of March, with prices starting as low as 35.000 euros (there will also be cars with an estimated value of over two million euros), but we’ve selected only 13. For the whole list, visit the Bonham website. 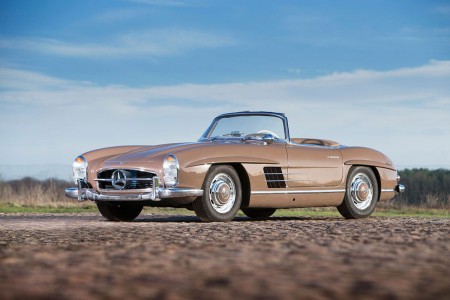 This is one of the four SL cars to be offered at this auction. It was ordered by the wealthy industrialist Alfried Krupp (von Bohlen und Halbach) with all the original acquisition papers included. The car has had three other owners over time, the last of which bought it in 1980. The Mercedes-Benz 300 SL has been on the receiving end of a very meticulous maintenance program, which explains how it was able to take part in all sorts of classic car meetings and rallies. The estimated value of the car sits between 900.000 euros and 1.2 million euros. 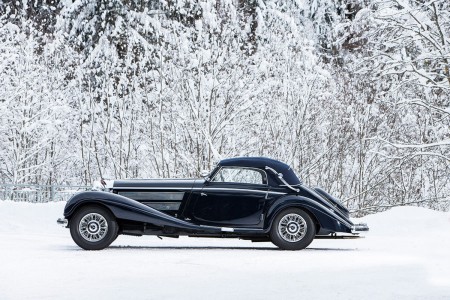 Whoever will be willing to part with anything in between two and two and a half million euros will be able to get his hands on this wonderful car that was once one of the fastest of its time. With a 5.4 litre engine and the help of a compressor, this car was able to pump out 180 hp which translated into a top speed of 180 km/h. That was nothing short of breath taking at that time. 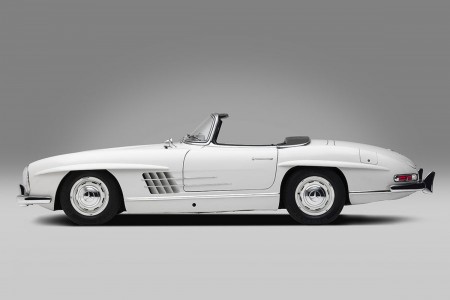 The third car, another Mercedes-Benz 300 SL Roadster, has been in the same hands for the last 48 years – Lot 127

This car must have been one of the most pampered vehicles ever, with regular servicing at intervals no longer than 3.000 kilometers, all closely documented. The first owner sold it to a family of architects in Berlin who have continued pretty much in the same manner, and their efforts will likely pay off as the car is now estimated to sell for anything from one million to 1.4 million euros. 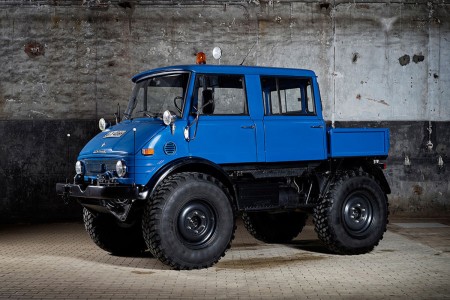 This car is even more rare than the 300 SL – actually, it is A LOT MORE rare – only 353 double cabin Unimog being ever produced. It is in mint condition and sports a very funky blue paint. The Unimog is powered by a 5.7 liter six cylinder engine and has a four wheel drive system. Being an utility vehicle, its age is not measured in kilometers, but hours of work: it’s got 1.478 of those under its belt, but the last two owners did some minor restorations and so the car presents itself sparkling new. It’s also a steal at 40.000 euros to 50.000 euros. 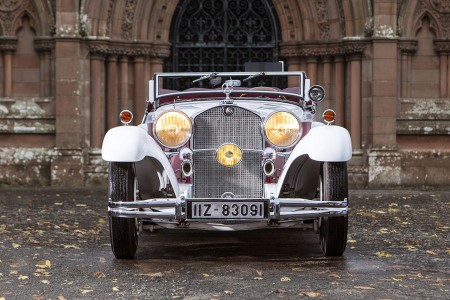 This car was once in pretty bad shape. The current owners have had it in the shop for 15 years, from 1985 all the way to 2000. It took them another 13 years to buy it back in 1978 (they first saw the car in the mid 60’s), after it previously exchanged no less than four owners – Union Automobil GmbH, a Stuttgart architect, a cinema operator and a Bavarian film producer.

It’s important to know the 370 S Roadster only travelled a maximum of 500 km after the restoration process was completed and so the car is expected to sell in between 400.000 and 600.000 euros. 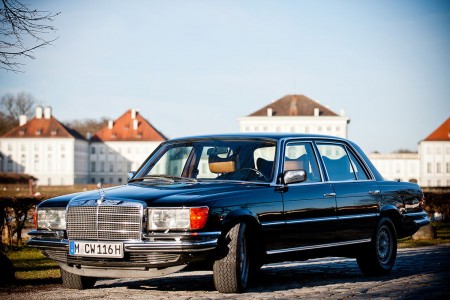 This was once the top Mercedes-Benz that money could buy – and looking at the car even now, it’s not hard to imagine why. The car exudes power and presence and the interior combination of black lacquer and cognac brown leather is as stylish as ever. This 450 SEL 6.9 was partially restored in 2006 and only has 104.000 km on board, so it should be in pretty good shape. The price is one of the lowest: 35.000 to 45.000 euros. 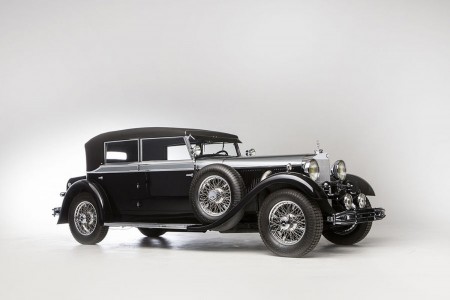 This is one of the 37 Cabriolet Ds ever created, so this alone might explain the huge price tag of 2.3 to 2.8 million euros. This particular car was once owned by the famous German dancer/actor/theatre director Erik Charell (if you lived in the 30’s, you’d know who he was) who was forced to flee into the United States because of the political situation in Germany. Of course, he took his car with him. The car returned home in 2004 when it went through a second thorough restoration. 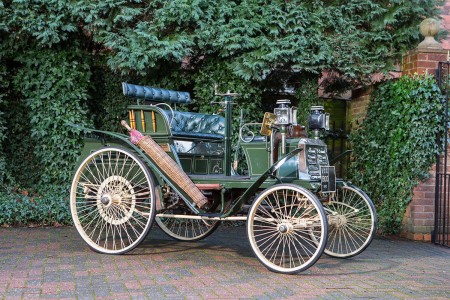 This is the oldest vehicle in the auction dating back to the turn of the centuries – not the last one, the one before it. The Ideal was a second version of the best seller Velo, but with a few important improvements: a much lower centre of gravity, a 3 speed gearbox, leaf springs suspension and a passenger seat. The estimated price is said to reach a maximum of 280.000 euros. 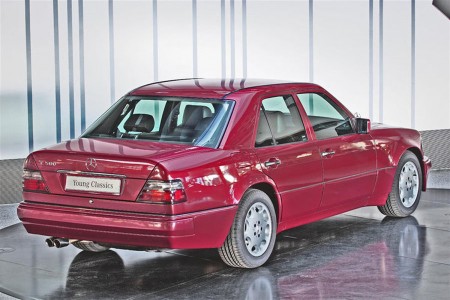 It may not be that old, but this is a sure investment – in a few years time, its value will rise and it will keep on rising provided the car is kept in tip top condition. This model came with a five litre V8 engine popping 326 hp so the temptation to take the car out for a spin is pretty high. The colour is either a strong selling point or a major drawback, depending on who you’re asking. The price set for this E 500 is 40.000 euros to 60.000 euros. 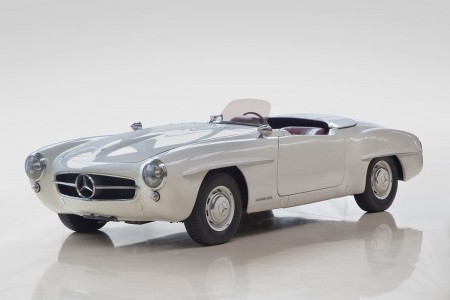 This car is believed to have won the 2-litre GT class of the Casablanca Grand Prix in 1956. It’s not a certainty, but what IS clear is that its owner at that time won the title, and so it’s very likely he did it with this car. The Clubsport kit this car is wearing is extremely rare and only comes to add even more value to the looks and the potential racing pedigree of this 190 SL Roadster Clubsport. Given  all this, the price isn’t really all that high: 250.000 to 300.000 euros. 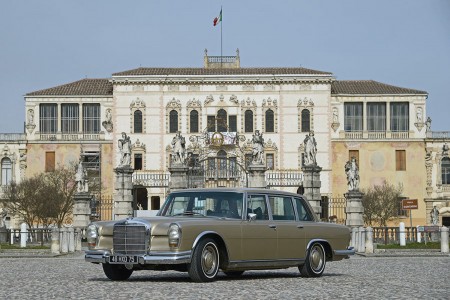 The eleventh on the list is the Mercedes-Benz 600 Saloon, also known as “the best car in the world” – Lot 142

The new S-Class was not the first car to claim it is the best in the world – the 600 Saloon did it long before it. It’s how the brief for the engineers sounded and, as most would agree, it was a request they saw through brilliantly. To mention only two features, it had air suspension and two zone air conditioning. 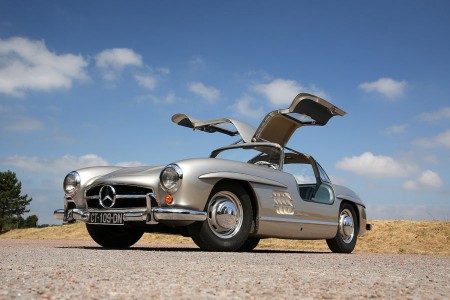 The car was built in 1955 for an American owner and flew over the ocean where it remained for the good part of 50 years. In 2003 it came back to Europe where it exchanged quite a few owners and received a new non-original paint job. Right now the car is painted silver metallic and has blue leather trim and blue carpets. With such a rough history, the estimate of 950.000 to 1.25 million euros should be rather optimistic. 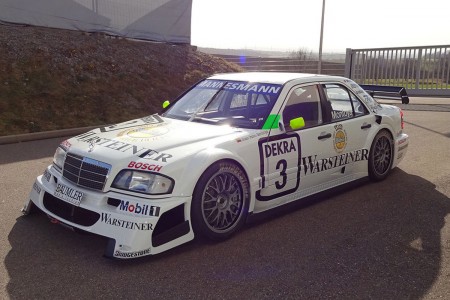 Finally, one for the track enthusiasts: DTM Mercedes C-Class – Lot 129

This car is part of motorsport history being driven by legendary names like Jan Magnussen, Juan Pablo Montoya and Ricardo Zonta during the 1996 season of DTM. The debuted by coming in second in the first race at Hockenheim and a triumphing in the second. Driven by Danish pilot Magnussen, the pair also secured three third places at Nurburgring, Sao Paolo and Suzuka.

The car was put in hibernation after the end of the 1996 season so it’s in need of some technical attention. The price is set at 350.000 euros to 450.000 euros, with the option of having the car delivered in race-ready condition, but at an extra cost.