Hamilton wins, Rosberg fails to make it to the podium

It was a terrible start for Mercedes AMG PETRONAS, with the two drivers losing their positions in a blink. Lewis Hamilton was so busy in keeping teammate Nico Rosberg out of his way that he did not even see Ferrari’s Sebastian Vettel arrowing his way to the front.

Hamilton pushed teammate Rosberg off the track, the German managed to get back, but into the 10th position, carrying a bit of grass and gravel with him. 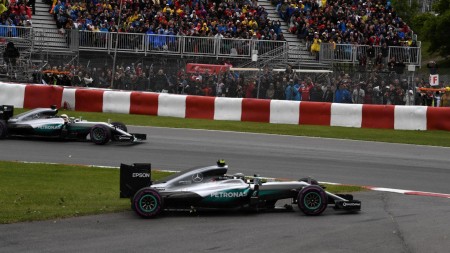 The Ferraris changed from the wet to the soft tyres in the 12th lap on the semi-wet racetrack in Montreal, while the Virtual Safety Car was on. The stop committed La Scuderia to a 3-stop race.

Hamilton pitted in the 24th lap to go on softs, while Rosberg was closing in on Perez. From the pits, he got one order: “Go get them, tiger!” But the tiger had big trouble with Valtteri Bottas later on. And not only with him! The German complained about lights on his steering wheel in the 46th lap.

With 30 laps to go and with fresh rubber, Vettel was 7 seconds away from Hamilton. 10 laps later, the hunt continued, just 5.6 behind.

The other Mercedes AMG PETRONAS driver, Rosberg, breathing in Bottas’ neck, got a puncture and needed to pit again, coming back on the track in the 7th spot and sailing down Ricciardo’s and then Raikkonen to get on the 5th. The German started his hunt to catch Verstappen, with the Dutch being less than 5 seconds up front. 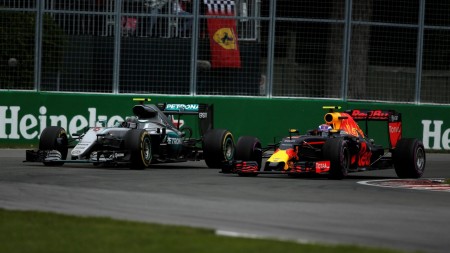 At the top, a mistake from Vettel gave Hamilton time to breathe: back to an almost 7-second gap though, with two mistakes in the same chicane in two consecutive laps.

The highlight of the evening was by far the Verstappen-Rosberg duel. The kid from Torro Rosso locked the way for the German each time he attempted to pass. And yet, Rosberg kept it all for the end, but just when he managed to pass Verstappen, he lost control and miraculously managed to get back on the racetrack, but still in the 5th place.

Lewis Hamilton danced his way back on the first position of the podium, the 45th ever victory for the Brit. Nico Rosberg is still the leader of the general ranking, 9 points ahead of the Brit.

In Montreal, where Ferrari’s Sebastian Vettel came second and Valtteri Bottas from Williams finished third, the Oscar-awarded Michael Douglas was now the man to do the podium interviews.