Halloween trolling – Mercedes-Benz and BMW make fun at each other

Mercedes-Benz and BMW poked each other on Twitter for Halloween, while Audi occupies its time with making Qnicorns. The German premium brands have been joking in tweets.

BMW USA is the one who started it, firing up against its long-time rival Mercedes-Benz. A tweet posted a couple of days ago shows a Mercedes-AMG E 53 wearing a BMW M5 costume with the caption: “Now every car can dress up as its favorite superhero.” 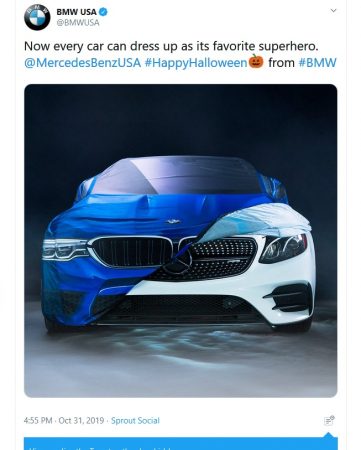 Mercedes did not just sit and stared as BMW was having all the fun, but decided to fire back. “Nice one. That’s a really scary costume. Especially that radiator grille”, hinting at the ever-growing front element of the Bavarian models. 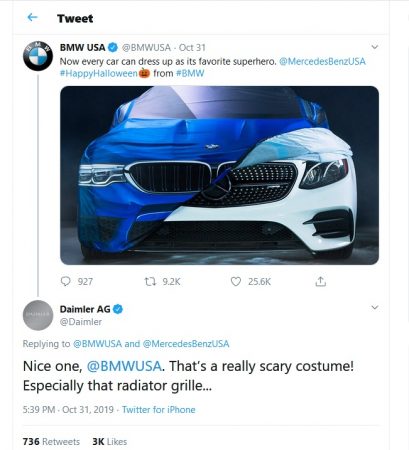 The new X7 SUV, the facelifted 7-Series saloon and the recently revealed Concept 4, all sport massive grilles that sparked up jokes on the internet. Even fans have been slamming the car makers choice of fitting the new models with the massive “kidneys”.

Audi is watching their dual from afar. The Ingolstadt-based premium car maker has no time to get involved. The four-circles cars have just become… qnicorns, with reference to the Q family of the SUVs.

For those unfamiliar with the USA-sourced celebration, Halloween is celebrated every year, on the 31st of October.