Half a million! What is the model that reached the impressive milestone?

Elena Luchian, November 29, 2019
895 0
Home Auto news Half a million! What is the model that reached the impressive milestone?

The half a millionth car has been celebrated by the teams from body-in-white paintshop and asssemby of the German plant. It is the only production center that has been building the exclusive saloon since 2013.

The production of the S-Class is based on innovation. In 2017, the luxury saloon was the first car to ever drive off the assembly line autonomously, during a pilot trial. And apparently, it is not just robotics: “In each of the 500,000 S-Class models there is a large portion of heart and soul from the entire Sindelfingen team,” says Michael Bauer, Head of Production at the Mercedes-Benz Sindelfingen plant. 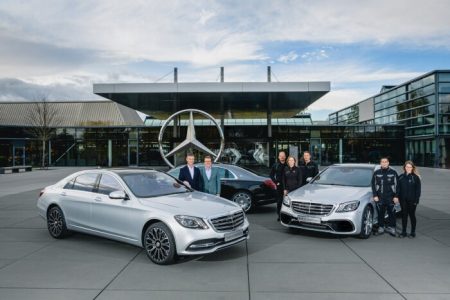 The employees benefit from an especially ergonomic method of working. It includes mobile platforms which move in synch with the line. The system is called ErgoSkid, raising the vehicles on the assembly line by 26 centimeters, enough for the the employees to lay the subharnesses for the floor unit.

The next Mercedes-Benz S-Class generation is inching closer to its debut and has already been caught testing, wearing thick layers of camouflage, but the current one is still living its days of glory.

The S-Class came into the world as “the best car in the world”, as it was described by experts, at its world premiere in 2013, in Hamburg. And figures seem to confirm: it is the best-selling luxury saloon worldwide. Half a million units of this generation have found their ways to their new owners, while since the market launch of the 220 model, in 1951, around four million S-Class Saloons have been delivered to customers worldwide. China is the biggest market, as more than every third model is sold there.

In Sindelfingen, besides the S-Class Saloon, Coupe, Cabriolet and Maybach, the E-Class Saloon and Estate, the Mercedes-AMG GT family and the GLA, together with the new EQC are being built. More than 25,000 people work there to make approximately 250 cars roll off the assembly line every day.