Ground-breaking record-breaking for the Mercedes-Benz Unimog, up the volcano

Two Mercedes-Benz Unimog units have climbed a Volcano in Chile breaking the altitude record. The vehicles have reached almost 22,000 feet high. The previous record was also held by a Mercedes.

Located in the Atacama Desert, Ojos de Salado remains the tallest active volcano in the world. And its seemed to be the perfect ground for the ground-breaking record.

No other wheeled vehicle has reached that altitude. 21,961 feet (6,694 meters) is the height a pair of Unimogs traveled to. And it happened along the unbeaten paths of the Ojos de Salado (Eyes of the Salty) volcano in Chile. Ten experts worked on installing four emergency radio units along the unbeaten path. They were designed to radio-connect with three other base camps in the area. The team was completed with two Unimogs supplied by Mercedes-Benz. 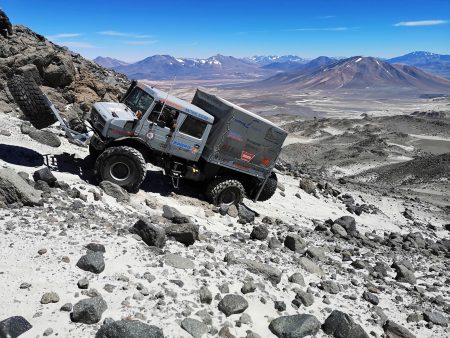 G-Class and Unimog – Two giants on the same team

But when the mission was completed, the team took a brave decision. One of the Unimogs would pursuit the altitude record.

The vehicles had undergone extended modifications that brought them special off-road wheels and tires, a variable center of gravity balancing system produced in collaboration with the Unimog development team, with the Unimog Museum and with a Unimog body maker. They also featured massive winches. 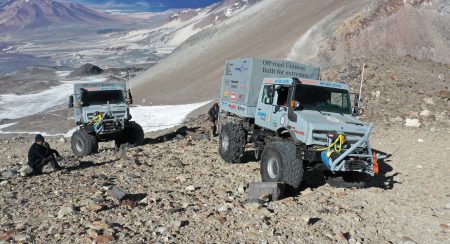 Extreme firetruck fights the hazards of the forest fires