This is the world’s first electric classic Mercedes-Benz SL. The model that underwent the conversion was the SL R107 from the 1970s.

Our grandparents and parents never saw this coming. The iconic model of the 1970s runs now exclusively on electric power. A shop from the United Kingdom, specialized in restoring classic Mercedes-Benz SLs, had decided to take a different approach this time. 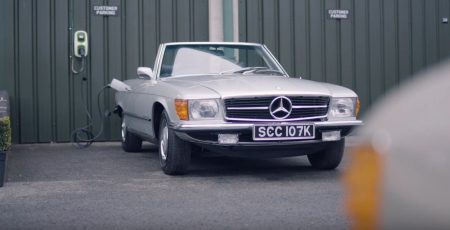 The SL Shop is the company that removed the 3.5-liter V8 engine from under the massive bonnet of the automobile, a unit that developed 190 PS (192 HPS) and made it accelerate from a standstill to 100 km/h (62 mph) in 9.9 seconds.

The Brits keep the veil on the new output of the electric classic, but the reveal that they mounted two electric motors that make the model faster than its original V8 unit. The car has been granted with a range of 240 kilometers (150 miles). An extra 100 kilogram-weight (220 pounds) has been added to the new-old EV, that now also has an almost ideal 50/50 weight distribution.

The Mercedes-Benz SL R107 was manufactured between 1971 and 1989. It was the second longest single series ever produced by the premium car maker following the appearance of the G-Class off-roader. The two-seater featured a detachable roof and it came into the world as a replacement for the W113 SL. Its production came to an end in the end of the 1980s to make room for the R129 SL.

The Mercedes-Benz SL is the company’s only roadster.