The 2017 Mercedes GLE makes a stellar impression doing what it knows best – its job as a full-size, luxurious but family friendly SUV. But the big Benz is not alone anymore. The lighter, sportier all-new Audi Q7 is winning comparison test after comparison test against its rivals. Can it also beat the GLE? To find out we have pitted them against each other in their best-selling V6 diesel powered guises, the GLE 350 d 4Matic and the Q7 3.0 TDI Quattro.

Launched in 2011, the current GLE (formerly known as the ML) has undergone ample styling and technical renovation. Upon closer inspection, the design update meant to bring it more in line with its rounder, softer brothers, the C-Class and the GLC, has paved the way for a more chiseled front end with slimmer, more aggressive headlights and an imposing – larger than life, some might say; grille and three-pointed star logo. At the back no significant changes can be found, though, as Mercedes considered newly-shaped tail-lights and bumper are enough to justify the facelift moniker. The interior upgrade is equally restrained with the new free-standing 8-inch color screen placed atop the center console taking center stage.

Most of the technical solutions found under the skin of the Mercedes SUV are more or less the same as before with the notable exception of the standard all-new 9-speed 9G-Tronic automatic transmission – a triumph of modernity that finally puts to rest the unloved 7G-Tronic of old and brings immediate advantages in therms of efficiency and performance for the bread and butter GLE 350 d. Power remains the same, at 258 hp, for the 3-litre V6 turbo-diesel, while fuel consumption is now 0.4 l/100 km lower than before, at 6.4 l/100 km. 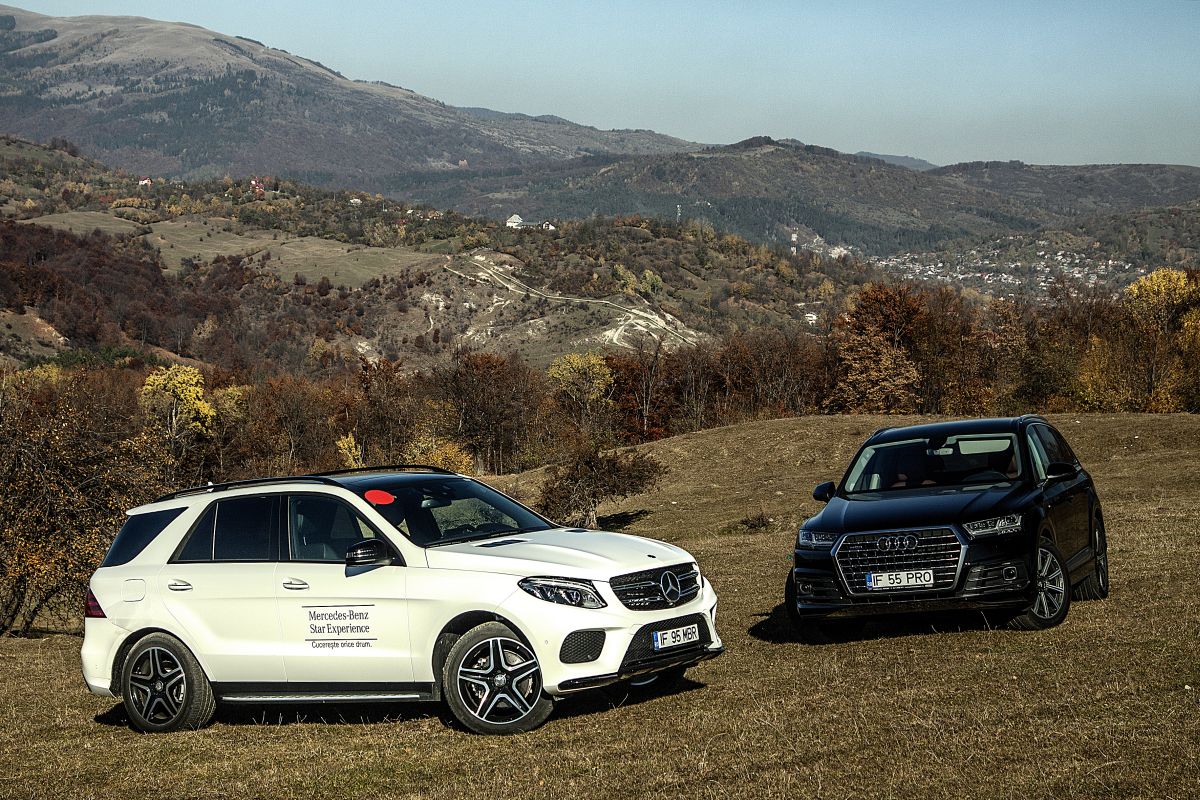 Whether a fresh look and an all-new name can make the 2017 Mercedes GLE a better car, remains to be seen, especially since the rivaling Audi Q7 is new from the ground up. More space, more comfort, more refinement, more technology and, why not, more sportiness. This must have been the ambitious engineering brief set by Audi. An ethos fully sustained by the surprisingly taut lines of the Q7 which has seemingly traded its old bulky proportions for a more aerodynamic look not far in spirit from the elegant simplicity the gorgeous Avants are famous for.

Has Audi finally made the shift from a techno-led brand to the realms of fashion-obsessed? No, not at all. The new Q7 is just as advanced as you’d expect it to be. In fact, it is the first Audi to make use of the firm’s all-new MLB Evo platform, an intelligent mix of steel, magnesium and aluminum which brings the weight down by a spectacular 325 kg, 67 of these being credited to the suspension mounts alone which now feature five arms instead of double wishbone solution. Mind you, the Q7 is no light-footed ballerina, with unladen weight still toping 2 tonnes at 2,070 kg, only 105 kg below the more traditionally built 2017 Mercedes GLE which tips the scale at 2,175 kg sharp. 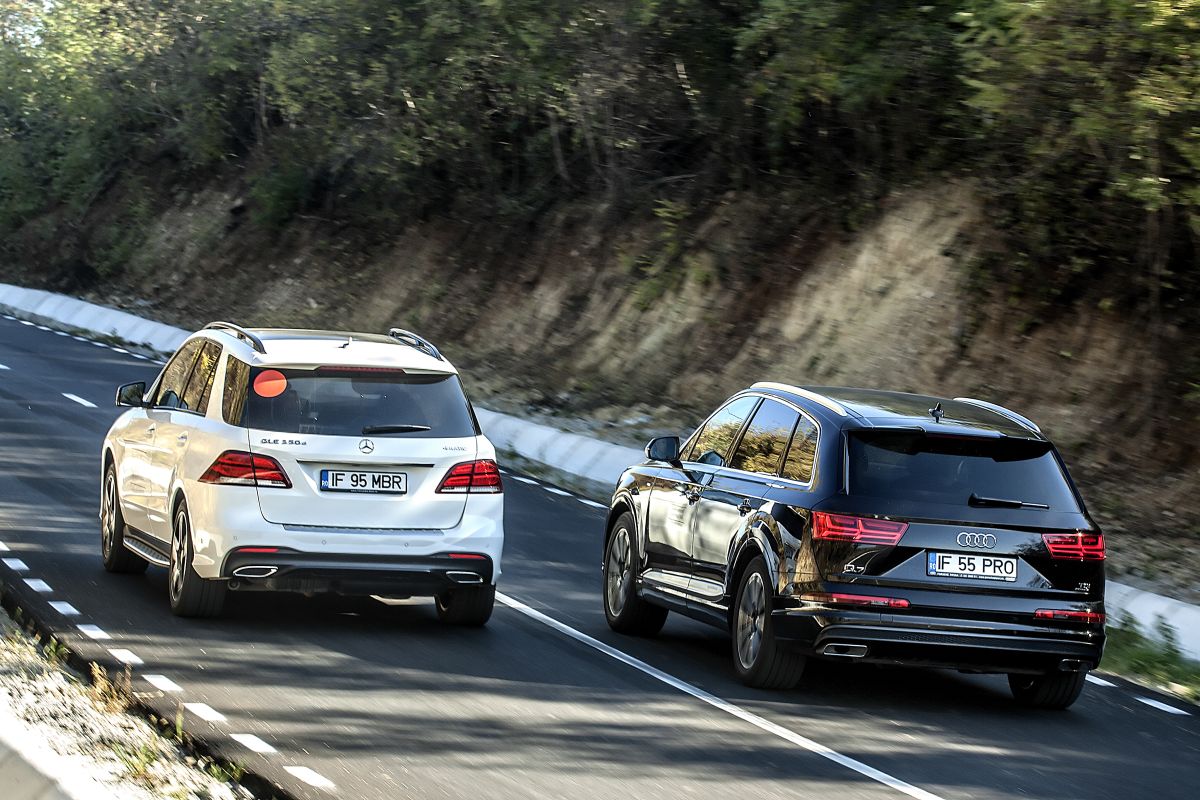 As history has taught us, a lower weight can only make wonders for the pleasure of driving. Yes, pleasure. Despite the (still) enormous dimensions the Q7 somehow feels pleasantly agile, compact and manageable at all times. It all comes down to the refreshingly communicative steering and the all-wheel steering system (the rear-wheels steer 3,5 degrees in the same direction with the ones at the front for superior stability in corners or 5 degrees the opposite way at low speeds to aid parking maneuvers) certainly helps too and deserves every last penny of its 1,150 euro asking price. Roll and understeer are effectively kept in check at all times with the standard Quattro system permanently varying the torque distribution, though never sending more than 65% to the front axle and 80% to the rear. 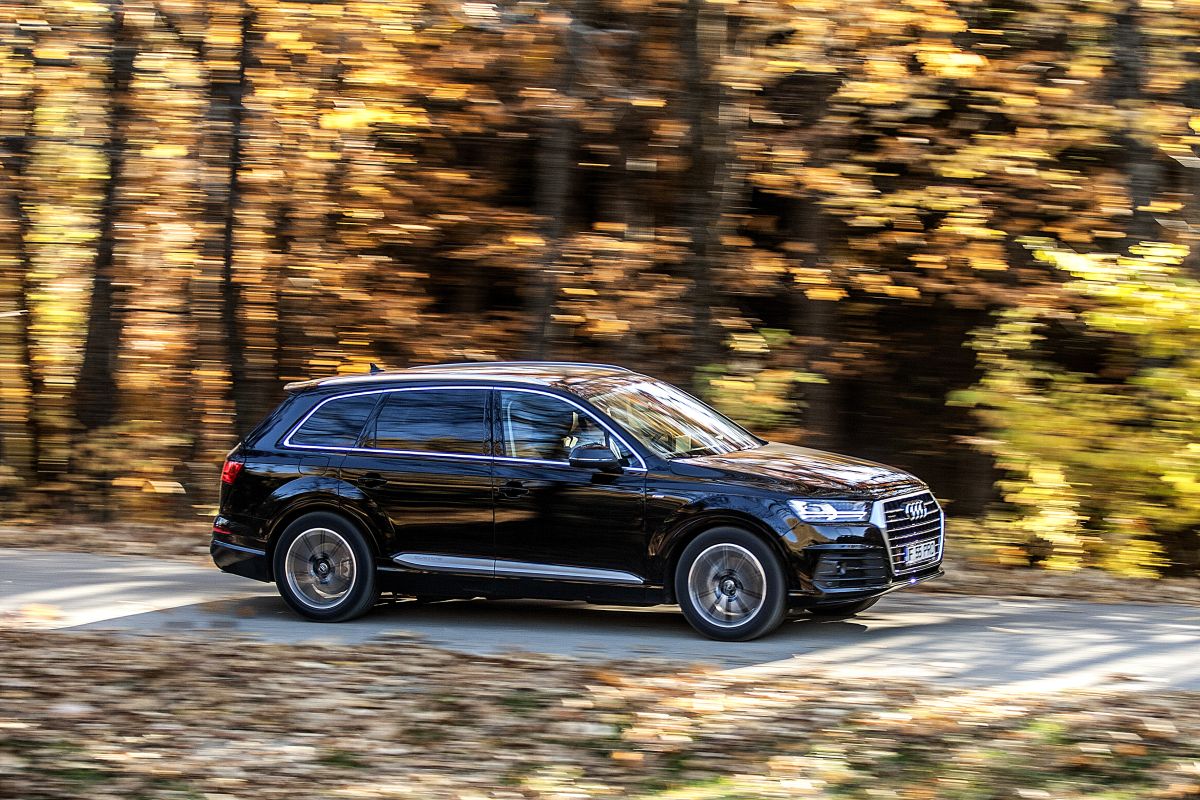 Zippy is also a word easy to associate with the Audi and its mighty 3.0-litre V6 good for 272 HP and 600 Nm. The ZF sourced eight-speed gearbox is fast and sure footed with only 6.3 seconds keeping the Q7 apart from the 100 km/h mark. Top speed is 234 km/h while the official fuel consumption is only 5.7 l/100 km, 0.7 l/100 km lower than GLE 350 d.
Wind noise is also surprisingly low,  even compared to the Mercedes. For the most dignified travel amenities in the test, the Q7 appeals to such tricks as the overachieving air suspension which can either lift by 25 mm in allroad mode and by another 35 mm in lift/off-road conditions or, on the contrary, lower itself with 15 mm at highway speeds. It costs 2,050 euro and is a match made in Heaven which hardly lets any transverse joint shock ever inward. 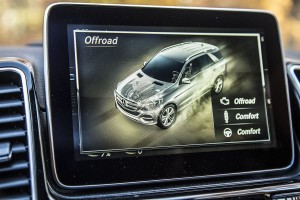 Poor surfaces should be a piece of cake for the master of comfort GLE too, of course. Only in theory, ’cause the big Merc is in fact rather unsettled and reeling. It all comes down to the fidgety AIRMATIC suspension (2,034 euro) which simply can’t seem to find the right balance between the ability to soak up bumps and its tendency to get on the firm side. The ADS adaptive spring rate and the Dynamic Select driving mode selector (Comfort, Slippery, Sport, Individual) are standard alongside the 4Matic four-wheel drive system. Saddled with a direct, but generally mute steering, the GLE is not exactly what you’d call a sporty SUV. Brake feel is consistent with the bulky GLE coming to a full stop from 100 km/h after 43.2 m, 2.1 m longer than Q7.

Fourteen horsepower short, but 20 Nm up compared to the Q7, the 3-liter diesel delivers 258 HP and 620 Nm and proves to have a generally relaxed nature which matches well the philosophy of a brand which tends to put comfort and satisfaction above all. The bigger mass seems to take its toll, though, with top speed (225 km/h) and 0-100 km/h acceleration (7,1 seconds) inferior to those registered by the Q7. If there is one thing surprisingly below reproach that would be the nine-speed automatic gearbox. Despite the extra gear, it’s still rather slow to react, especially on downshifts, by today’s standards, saving face by keeping the engine idling at most time for the sake of acoustic refinement. Even so, the GLE is no more quiet to operate than and neither more frugal than the Q7, its real-life mixed consumption rocketing to 10.6 l/100 km, a full 1.2 l/100 km above its rival. 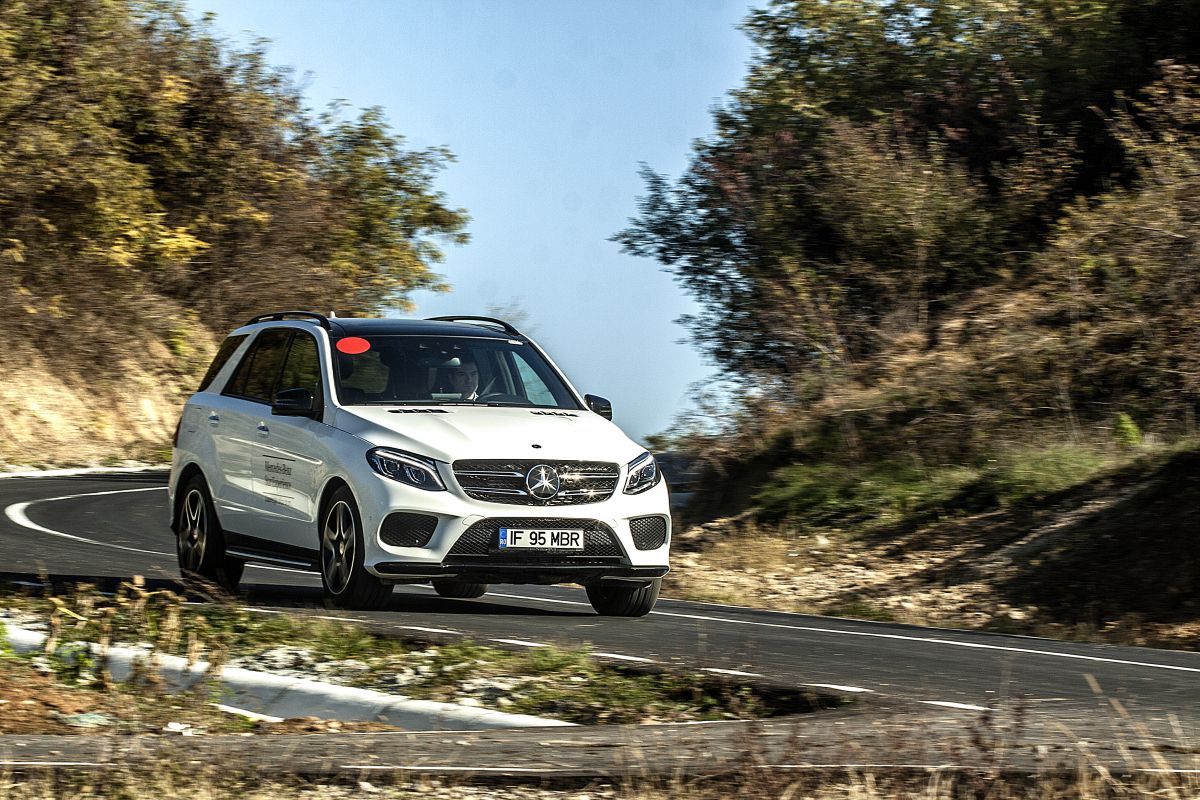 What the Audi can’t match is the courage with which the 2017 Mercedes GLE can tackle particularly difficult off-road situations. If equipped with the Off-Road Engineering Package (2,261 euro, not present on the tested model) the Mercedes gets closer to the professional end of the 4×4 spectrum, as evidenced by the locking center-differential, the low-range mode and the maximum ground clearance of 285 mm it gains in the process. Approach and exit angles are also good, at 30 and 29 versus 23,1 and 14,4 degrees, respectively. Even with the high-heeled air-suspension at its maximum Lift Mode, the Q7 can only put 245 mm between the asphalt and its ‘belly’. Clearly no off-road aficionado material. 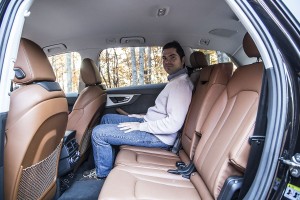 Dynamic ambitions are hardly present, then. So the GLE doesn’t bother us with that anymore and bets everything on its trump card, serene comfort, getting in line with the soul of the true boulevardier every Mercedes ought to be. If this would still be true today, then the GLE would find itself in a rather tough spot, yielding to the cavernous Q7 in therms of sheer practicality.

The GLE owns this to its smaller footprint. Even if you’d be hard pressed to guess the Q7 is in fact the bigger car, the cold figures speak for themselves. At 5,052 mm long, the Audi holds a full 233 mm advantage over the GLE (4,819 mm), while its wheelbase is also the more generous one, at 2,994 mm versus 2,915 mm. Space is simply enormous by any standards, especially on the rear seats which seem to pamper their occupants just as good as the A8 fully-fledged limo.

Divided in three individual segments cut in an unusual 35/30/35% format, the bench can slide forward or aft by 160 mm, while the backrest can also recline in no less than 7 different positions. With the rear seats stowed away, the luggage compartment grows from the already record setting 890 litres to 2,075 litres versus 2,010 litres advertised by Mercedes. Unfortunately, the GLE can’t even hold a candle to the mighty Audi, offering a full 200 litres less standard storage space, at only 690 litres with the seats up. Their backs are also horizontally adjustable, but their cushion is slightly shorter and less cosseting. Space is also visibly down compared to the airy Q7, especially at the head. As much as we’d love to see the GLE win this round, the lower driving position (11 cm lower) and the bigger wheelbase of the Audi are hard to fault. 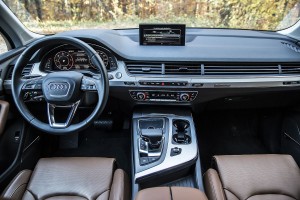 Just as its revolutionary ergonomics. Audi goes full digital with the arresting 12,3 inch Virtual Cockpit TFT screen (600 euros) sitting where you’d normally find the instrument dials. Fully configurable and blessed with superb resolution (1440×540), it shows everything, from navigation info to the trip computer or radio stations in colorful graphics. Its menu structure – initially too complex to cope with; becomes easier to live with as time goes by. In fact, mile after mile, hour after hour, you get to realize how brilliant the idea is.

The only inexplicable detail seems to be the odd angle at which the screen is mounted, slightly angled downwards in relation to the driver’s line of sight. All the info shown on the Virtual Cockpit is doubled on the 8 inch center console screen, identical in diagonal with that in the Mercedes. Another odd-ball decision has put the touchpad and rotary controller of the MMI multimedia system between the gearbox lever and the center console, instead of the more intuitive positioning that should have seen the same controls placed aft of the transmission. No such quibbles in the GLE which in true Mercedes fashion dispenses with the lever altogether and goes for the American flavored steering-column controls route instead. 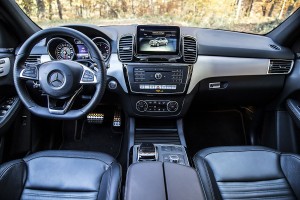 The GLE feels its age, the fit and finish simply running a lap behind the Q7. Unrivalled finesse is what helps the Audi enchant the senses with swathes of quality materials covering virtually every conceivable corner of its interior. Mercedes prefers to cater for a more conservative public and take a more pragmatic approach for its ambiance. In short: darker tones, cheaper plastics. We’ll have to wait for the next-generation GLE before we can truly say the Audi Q7 is truly in danger of being dethroned at the artistic impression chapter.

Traditionally, Mercedes models outpace their rivals’ cost levels. Not anymore! Priced from 60,749.50 euros, the GLE 350 d is in fact the cheaper model here, with the Q7 3.0 TDI Quattro commanding an extra 151 euros, at 60,900 euros. And when all is said and done (with all optional equipment taken into consideration, see the tech sheet below for reference) the Audi’s cheque sky rockets to 83,520 euros versus 82,182 euros for the GLE 350 d. Ouch! 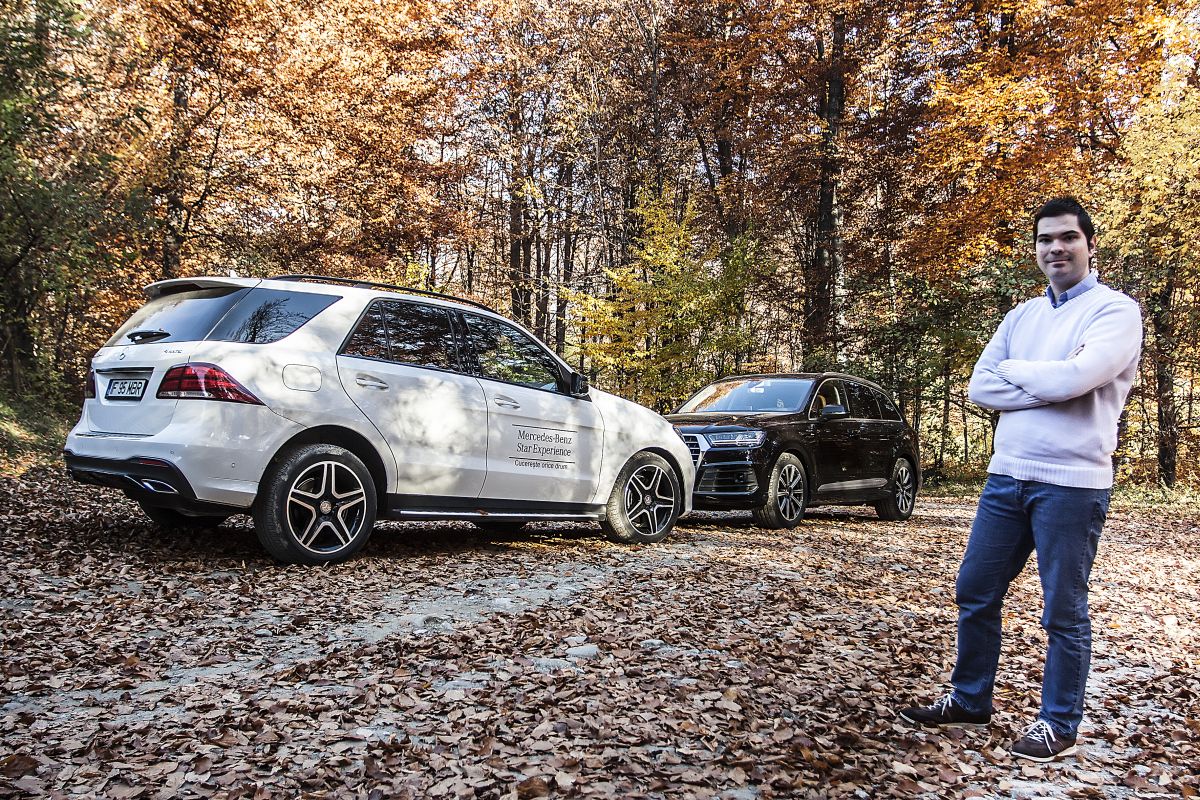 So, why did the GLE lose? Simple. Despite its new appearance and equally fresh name, the big Mercedes simply cannot hold up anymore in company of lighter, more agile and especially more efficient contenders like the overachieving Audi Q7, a behemoth who traded its heavy, old-school tuxedo for a breezy, Bond styled Brioni suit. The GLE has to take comfort in its ability to cater for the traditionalists who still prefer a classic approach to the SUV recipe.