The German magazine auto motor und sport has made an interesting comparative test with two compact models that made history 20 years ago: Mercedes A-Class  W168 and Audi A2.

There are many who regret the first two generations of A-Class. Mercedes no longer has a compact model under 4 meters long and so practical. In fact, in the automotive industry I don’t think there has been a compact premium model that offers so much space over such a short length.
The sandwich structure remains today, more than 20 years after its launch, an exceptional technological innovation. 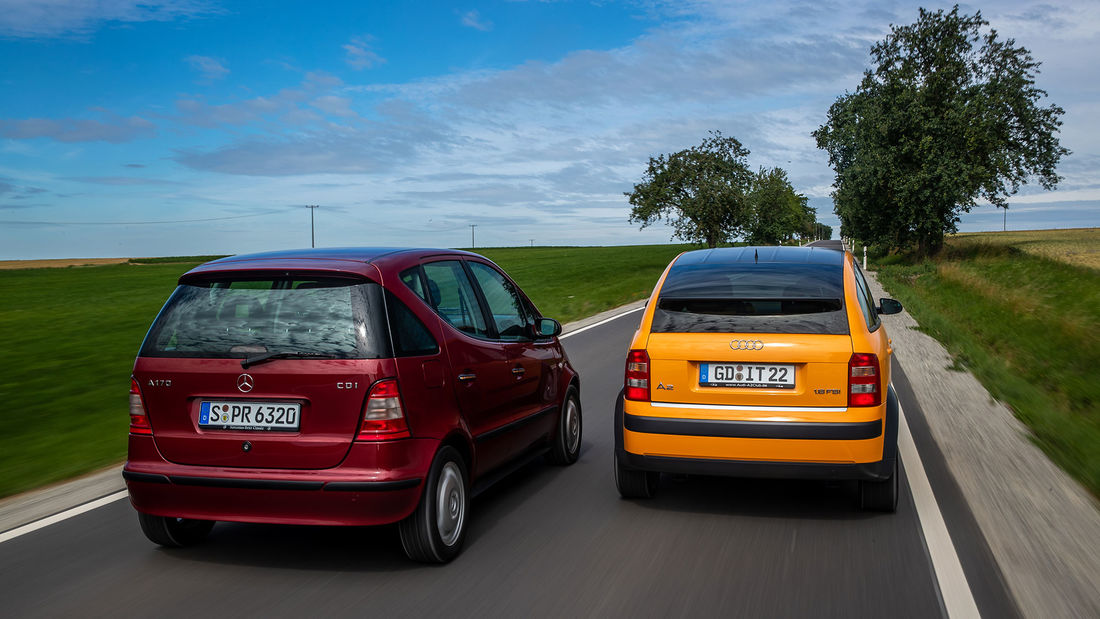 The first generation Mercedes A-Class W168 was a great success. Between 1997 and 2004, with a facelift in 2001, 1,086,873 units came out of the factory gates in Rastatt. Along with the 2001 facelift, a 170 mm elongated wheelbase version was also offered. The direct competitor of the Mercedes A-Class, Audi A2, could not keep up with the compact car from Stuttgart. Only 176,377 units were produced at the Neckarsulm plant between 1999 and 2005 and a facelift was operated in 2003.

Nothing we knew about Mercedes was kept at A-Class. And very few believed that the Mercedes Vision A93 concept presented at the Frankfurt Motor Show in the autumn of 1993 under the motto “Rethinking the car” would ever go into series production.

But Mercedes continued to believe in its star, and with a few minor changes, the Studie A concept presented at the Geneva Motor Show in the spring of 1994 foreshadowed the A- Class series model launched in 1998. In 1995 in Frankfurt, Mercedes also presented the interior of the car and through an intense advertising campaign Mercedes managed to remove the skepticism of the customers as a Mercedes must be big to be a real Mercedes. 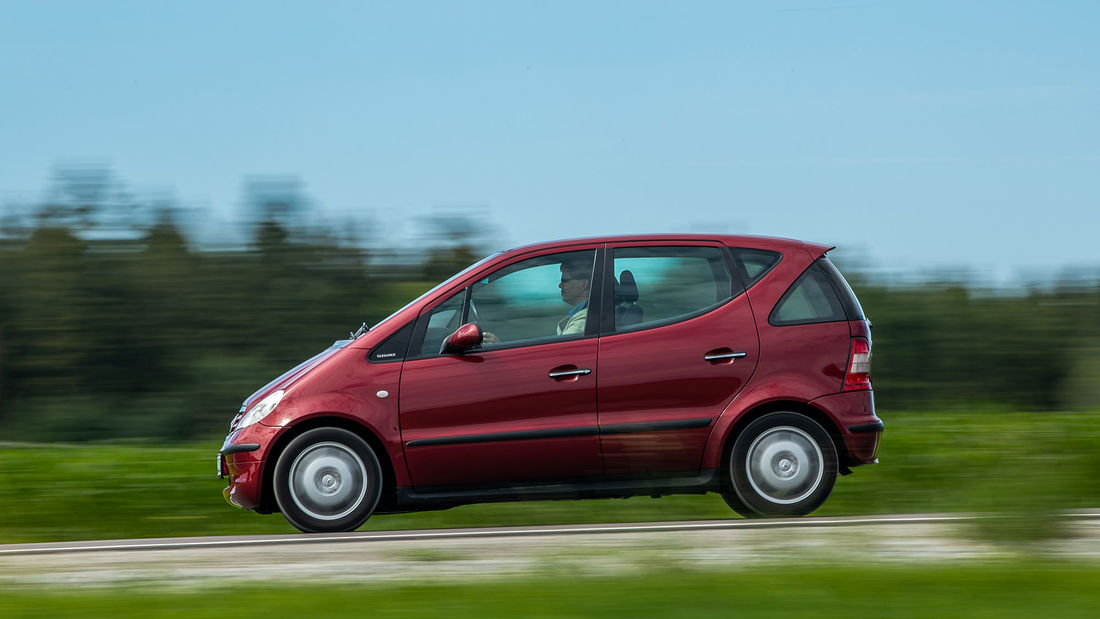 This small Mercedes had several innovations like an S-Class: 72 possible seat configurations, including optional individual rear seats, the sandwich structure of the body or various forms of propulsion.
The sandwich structure had three advantages:
– allowed the adoption of electric propulsion by mounting the battery in the double floor but also the propulsion with fuel cells
– in case of impact, the engine slips under the floor and does not enter the passenger compartment, avoiding the injury of the passengers.
– by tilting the engines, the front is very compact and so over 70% of the length of the car is dedicated to the interior space. So this car of only 3.80 meters long was as spacious as a VW Golf or Audi A3.
Therefore, new engines needed to be developed. The differential is integrated in the gearbox and the engines are tilted 59 degrees forward. The wings and tailgate are made of plastic which is lighter and  better withstands minor accidents.

But when you enter completely new territory the risks of problems must not be neglected. The high structure and the higher center of gravity created problems.
On October 21, 1997, Robert Collin, editor of the small Swedish magazine Teknikens Varld took a Mercedes A-Class loaded with extra ballast and performed an avoidance maneuver after the car overturned. 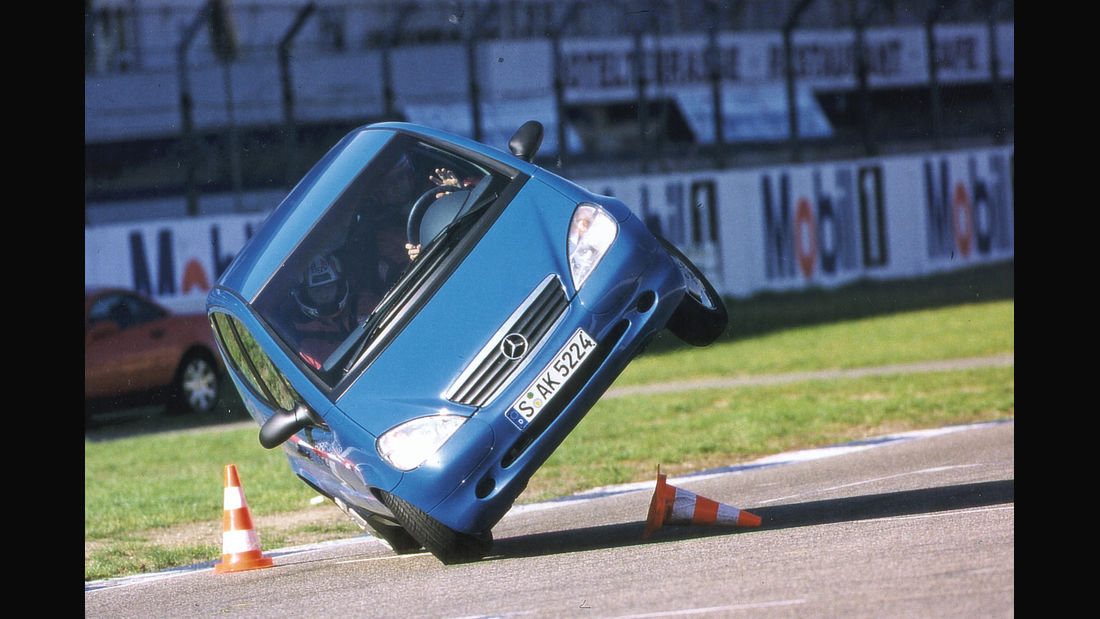 Photos of the overturned A-Class have traveled the world. And Robert Collin, then 48, became famous. In the meantime he was also in the jury of european Car of the year. Knowing this guy, I still don’t think 23 years after the event that he was able to overthrow A-Class and I still think that behind him was a Mercedes rival.

Mercedes was taken by surprise because this evasive maneuver does not exist in the test protocol of Mercedes but neither of the big car magazines around the world. Later, the maneuver was called the elk test, starting from the idea that on the roads of the Swedish forests an elk could suddenly appear and an extreme avoidance maneuver might be necessary.But Mercedes was not afraid of this big animal which is elk and reacted promptly. The Germans have invested DM 300 million in the introduction of the ESP system in the A-Class and in a new giant advertising campaign.

In February 1998 I traveled on a race track near Barcelona where Mercedes presented us an A-Class with ESP. The car passed all the tests and on this occasion Mercedes introduced the ESP system as standard on absolutely all its models.

Audi A2: an underestimated potential

The rival of the Mercedes A-Class, Audi A2 did not enjoy so much positive or negative publicity. The Audi Al2 concept presented in Frankfurt in 1997 went almost unnoticed. But the lightweight aluminum structure and the Alu-Space-Frame concept would make history later.

When the Audi A2 hit the market in 1999, the Mercedes A-Class was a successful model and all the problems were a thing of the past. The Audi A2 had to fight not only with the Mercedes A-Class but also with the internal competition in its own concern: it only had a narrow niche between the VW Polo and the Golf, but it also had an Audi A3 in the back of its head. 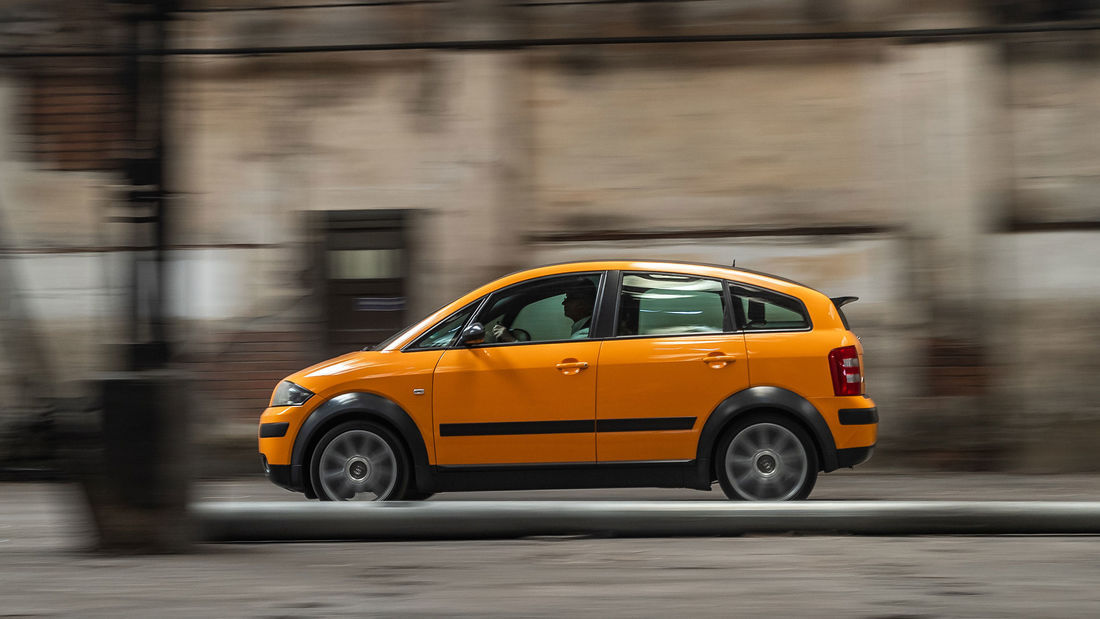 The Audi A2 had no any clear minus: it offered almost as much interior space as the A-Class, it was just as expensive, and with its teddy bear face it was more appealing to young people and women while the A-Class was more attractive for the elderly clientele who appreciate the high driving position.

Moreover, since that time the Audi A2 stands out with the A2 1.2 TDI 3L version with very low weight, automatic transmission and three-cylinder diesel engine that displays a consumption of only 2.99 l/100 km. And today or especially today a car with such consumption would attract many customers. The A2 1.2 TDI 3l also stands out with a record Cx of only 0.25 (the production car had 0.28) while the A-Class has a Cx of 0.31.

Are the prejudices confirmed when driving? Not at all! You can feel in the volcanic red A170 CDI with 2 liter diesel engine from the collection of the Mercedes-Benz Museum that that the car is very stable thanks to the wide tracks and the relatively firm suspension. Mercedes A-Class is also a manoeuvrable companion with its pleasantly direct steering, which is neither too much servo-assisted nor afflicted by excessive drive influences.
On a perfectly flat track, the A-Class, which weighs just under 1200 kilograms, whizzes nimbly through the curves. Its powerful diesel harmonizes well with the optional five-speed automatic.
On the other hand, the interior with colored plastics is not at the level expected of a Mercedes. However, significant progress was made in the second generation W169 after the facelift.

In the A2, which even undercuts the 1000 kilo limit for curb weight, you sit more in it than on it. In this discipline, the sandwich floor of the Mercedes takes its toll, forcing tall people to bend their legs as if on a chair. So you sit high and enjoy the all-round view and the comfort when getting in and out.

Audi A2 in papaya orange test offers better driving comfort. But it is not as maneuverable as the A-Class. With the direct injection engine, the well-tiered five-speed gearbox and the direct steering Audi a2 is nice to drive. Although it does not have the sandwich structure of the A-Class, the interior space is a little smaller but still comparable to the A-Class.

The A-Class is more spacious and more incisive, but Audi also benefits from a first-class technique. Unfortunately, his potential was underestimated and he did not even enjoy the publicity of A-Class. However, the concept of the A-Class is more advanced because in the end the Audi A2 is a classic car  and only the aluminum body make the difference compared to a normal car.