Girl pulls a Mercedes-Benz with her hair

Looks like a woman in Morocco is really using her head! What seems to be the strongest woman in Morocco pulls a one-and-a-half tonne Mercedes-Benz by a rope attached to her hair. And she’s doing it with a smile upon her face. Hopefully, it’s not because of the hair being pulled back too tight! The amazing moment will be aired on “World’s Most Talented” TV program.

Ikram Shalhi of Morocco dragged the Mercedes-Benz for 32 feet (10 meters) of flat road, using her hair and her very own body power, to impress the juries in a new reality TV program that will be aired in Germany this spring. In order to pull the one and a half tonne German limousine, ropes were attached to the front end of the car and onto her curly ponytail.

Leaning down front, clenching her teeth, stretching her arms and straining her muscles, young Ikram manages to move the Mercedes-Benz E-Class inch by inch, going forward with very small steps. And afterwards, she actually picks up a bit more speed. The audience bursts into applause and yells of encouragement.

To make sure the car does not run over her, a man sat in the driver’s seat, ready to push the brake if necessary. 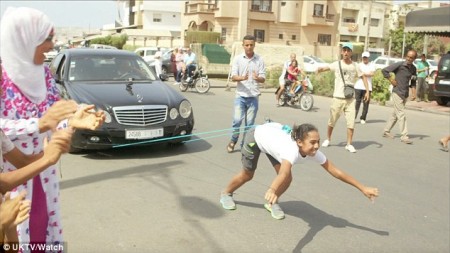 When you look at her, you think that – as skinny as she is – she wouldn’t even be able to carry a heavy shopping bag on her way back home from the grocery store. But a Mercedes-Benz E-Class is actually piece of cake for the fragile-looking Ikram. Starting this kind of stunts at the age of 9, the girl’s most difficult mission was to pull a Range Rover two years ago.

“But I don’t feel anything when pulling the car. It doesn’t hurt. I hope to be the strongest woman in Morocco”, the teenager proudly says.

Public displays of courage and force are often a street attraction in Morocco, but a woman showing so much strength is quite rare. Everything has been videotaped and will be aired on April, 28th.