GENEVA 2018: Mercedes-Maybach with Digital Light, the light of the future

This year’s Geneva motor show hosts the premiere of the Mercedes-Maybach S-Class with Digital Light, intelligent headlights based on state-of-the-art LED HD projectors and no less than two million reflective mirrors.

In the first half of 2018, Mercedes intends to offer fleet customers the possibility to test Digital Light. Initially, the high-tech lighting system will be offered on the Maybach S-Class, which becomes the first production model to feature this advanced technology. Six available warning/interactive icons which warn the driver about certain dangers and give relevant information can be projected onto the road in HD quality: Low-grip surface symbol, Construction-site symbol, Rear-end collision symbol, Lane-keeping symbol, Blind-spot symbol, Speed symbol. 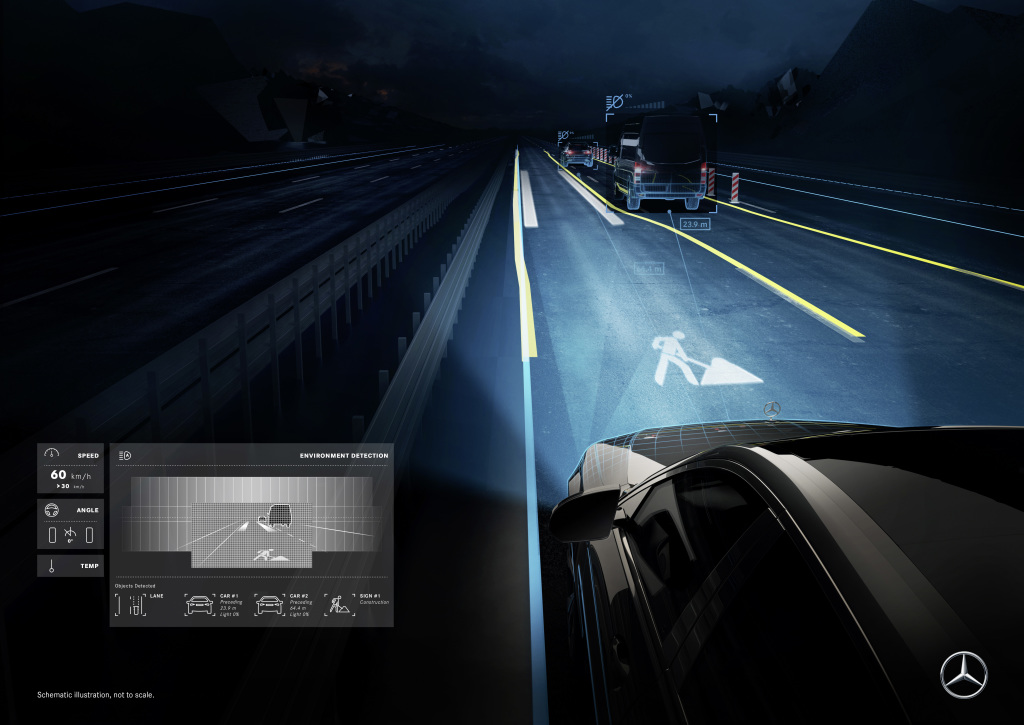 For decades, the automotive lighting technology made incremental advancements in illuminating the road ahead. Xenon headlamps brought a clear enlightenment, but only for a few years, and it is thanks to the LED technology that this particular area is now making great progress. Mercedes currently offers highly flexible LED modules with 84 individual LEDs per headlamp in the new E-Class – MULTIBEAM LED. Hence, it is possible to hide several individual objects from the light beam, or to illuminate others extra. The goal is to always provide the driver with the best possible light distribution without dazzling others traffic participants.

In collaboration with Osram, Hella and the Fraunhofer Institute, a completely new headlight with four LED chips and 8,192 individually controllable light points was created. This technology greatly expands the dynamic lighting functions, the possibilities of precise lighting control and the very precision of the lighting system. 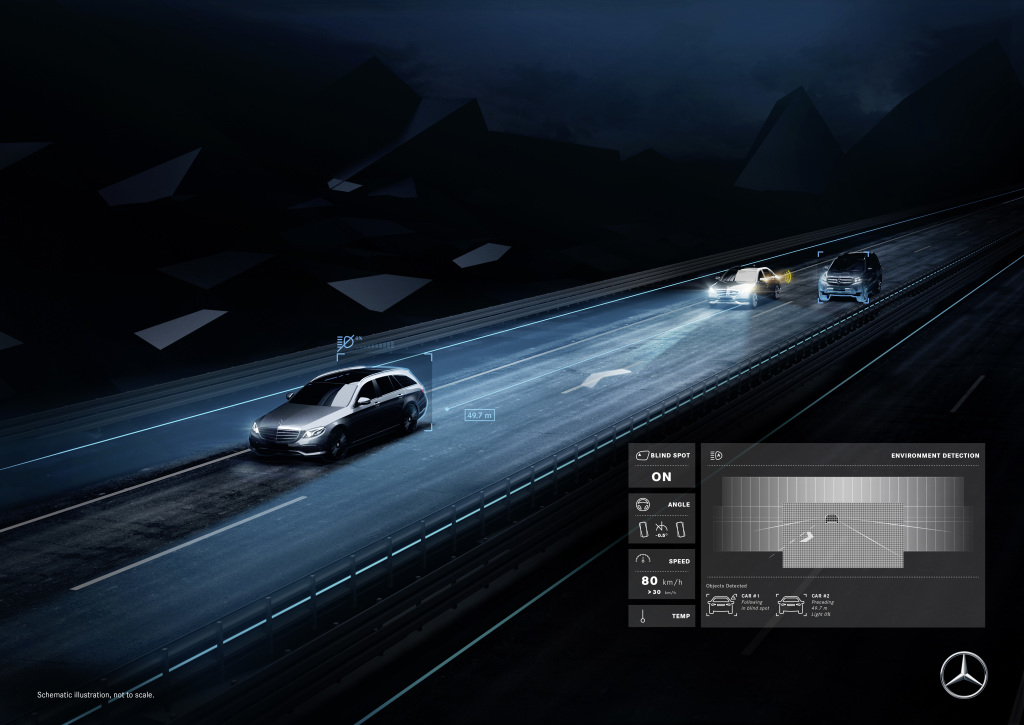 “Digital Light” can illuminate the smallest area
Together with the partners Texas Instruments and the Reutlingen-based lighting specialist Automotive Lighting, Mercedes has developed a headlight with one million light points, the “Digital Light.” Every headlamp thus becomes an HD beamer, which can also project pictures or traffic signs on the road in front of the moving car. A comparison illustrates the difference to the current “state often the art” headlights, the 84 pixel light. At 100 meters distance in front of the car, an area of ​​2.4 by 1.8 meters can now be precisely illuminated or just hidden from the cone of light. With the future Digital Light, the area is only 4 x 2.5 centimeters small. This enormously increases the precision of individual light beams.

The technology of such a headlight is fascinating. High-current LEDs send their light to a million tiny mirrors. Each of them can be adjusted by +/- 10 degrees. From these micromirrors, the directional light, a million tiny rays per module, the so-called light pixels, reflects through a large lens and onto the road. Sounds very complicated and fragile, but Mercedes assures us that vibrations from the vehicle or a bad road do not bother the mirrors, because their mass is so tiny that in fact they do not have their own moment of inertia. 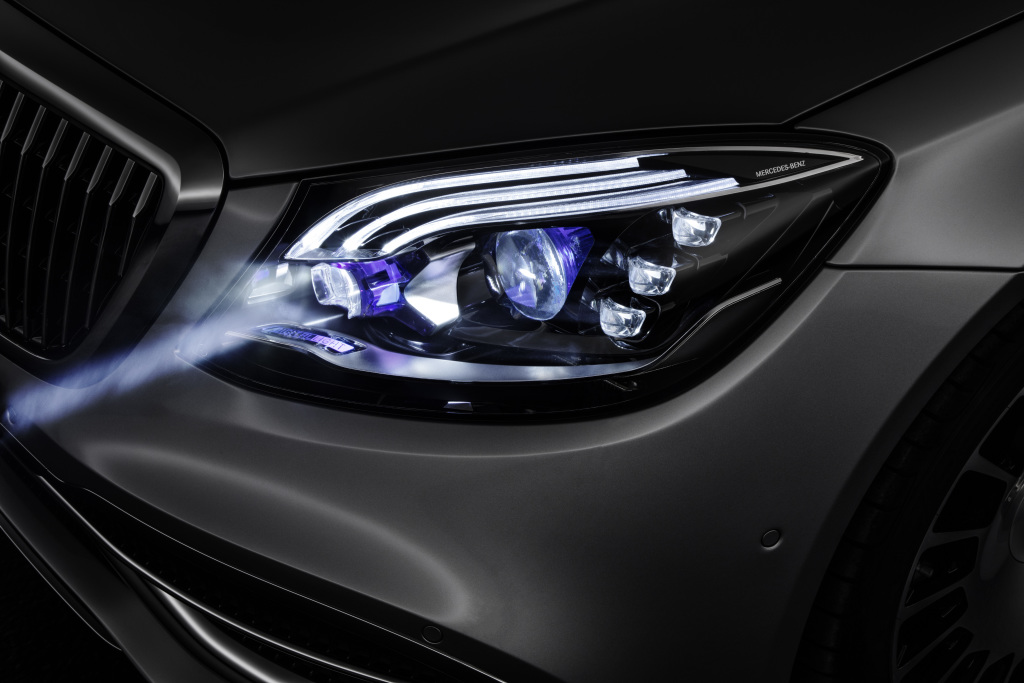 Two million mirrors in real time
The logic of these mirrors according is dictated by a computer, which in turn relies on the information of numerous sensors and a stereo camera to control so quickly and precisely every imaginable light distribution scenario. Over two million mirrors need to be moved in real time for both headlamps in such a way that they bring out the best possible light on the road at every moment and certainly do not dazzle anyone. This places correspondingly high demands on the sensors and the evaluation of this information. Thus, Mercedes also gives the “Digital Intelligence” the greatest importance in the overall electronic system of the car.

First impression of the Digital Light
During initial test drives through nocturnal fields, forests and suburbs of Stuttgart, the S-Class prepared by Automotive Lighting showed a true revolution in how we perceive lighting systems. Without the intervention of the driver, the light in front of the Mercedes protoype changes if necessary in fractions of a second, but usually this is achieved very soft and without hard transitions. Vehicles driving in front of the Mercedes are being shaded: an oncoming VW bus is being left out of the cone of light in the area of the windshield, a black-clad pedestrian on the side of the road is illuminated so precisely that his head remains in the shadows, highly reflective signs receive only so much faint light that they are visible, but certainly not dazzle, all while the headlights spread a very uniform, white and loosely 300 meters far reaching carpet of light in front of the car. 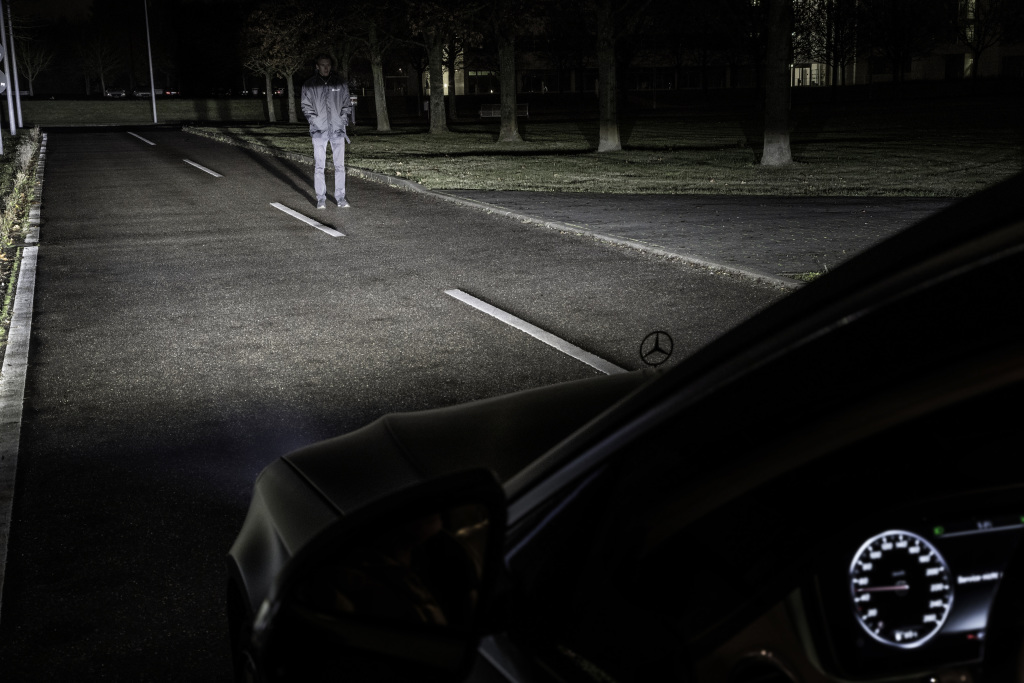