Roger Federer was probably the first to see the new Mercedes-Benz E-Class Estate, after those who built the new Stuttgart-made T-Modell. The tennis player who smashed all records pulled the cloth off the car in Stuttgart, right before going on court to play his first match at the Mercedes Cup.

Roger Federer has served no ace on the stage of the Weissenhof tennis club, but he already got on board of the car that reconfigures space, the all-new Mercedes-Benz E-Class Estate. With a cargo volume of 1820 liters, there is plenty of space for the player’s tennis kit. Starting late 2016, the Estate will go on sale with a third bench for kids, just perfect for his two sets of twins.

The former world number one has had a long-term partnership with the premium car maker, with the financial details being top secret, and has been driving the cars with the star for 7 years.

The innovative technology the most intelligent business saloon in the world is fitted with, has found room in the T-Modell as well, to match the demands of a champion driver. Federer felt at home in the comfortable leather seats. It was Ola Kallenius, Member of the Board of Management at Daimler AG, responsible for Mercedes-Benz Cars Sales, to show the Swiss around the cockpit of the car. 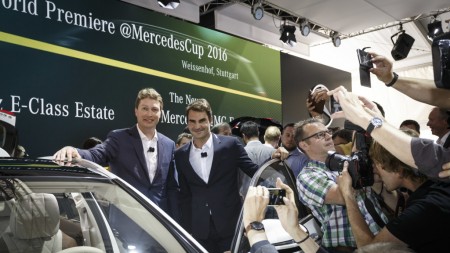 “I think it’s a really, really nice car”, says Federer, charmed by the aggressive styling and strong engine of the 43 AMG variant. “The inside is beautiful, you’ve got a lot of options with the trunk, for people, it’s really important. Going from A to B is about how you do it and how easy it is to do it. And this car allows you to do these things perfectly.”
“The good thing is that I drive a lot”, says the tennis player who prefers to drive himself to tournaments, instead of being chauffeured around the cities. “I love being behind the wheel, I like cars that are comfortable and safe, especially for my family and got a little bit of power, of course, I would take that any day.”

The man who won all the Grand Slams has recently advertised for the Mercedes-Benz V-Class. It probably won’t be long until we see him in the advertising video for the new E-Class Estate.