Gambling with the speed and rain in Monte Carlo

It was a mad race in Monte Carlo, where drivers gambled with the rain, the tyres and the speed, in a race full of incidents. The competition started under the pace of the Mercedes-AMG GT S Safety Car, driven by Bernd Maylander.

Seven laps after the start, after protests coming from the drivers, the Safety Car was out, the real race was on.

And the first accident came one lap later, with Brit Jolyon Palmer of Renault, hitting the guardrail and wrecking the car. Luckily, the driver walked away unharmed. 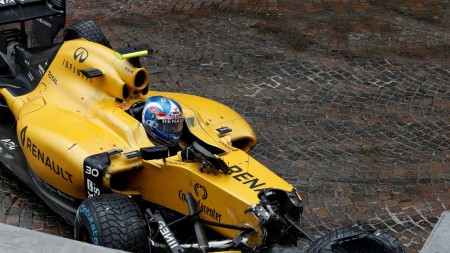 Romain Grojean followed and soon, Kimi Raikkonen hit the side, as well, got his front wing under the wheels, totally puzzled other drivers and drove for more than one kilometer like that to reach the pits.

From the second position, Nico Rosberg lost ground, with Ricciardo putting a 12-second gap between him and the German. In the 17th lap, Hamilton lost patience, pushed it and managed to get into the second spot, over a very slow Rosberg.

Hamilton forced his way into the first spot keeping the blue tyres even when others switched on to slicks. Completely messing the strategy up for the best, the Brit went straight into ultra softs in the 32nd round. Nico Rosberg followed him shortly. 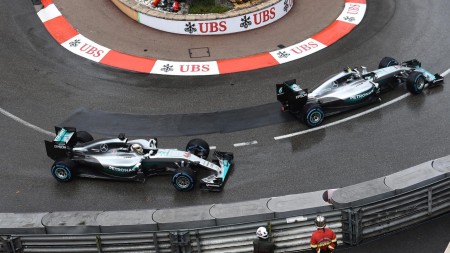 Max Vertstappen was out in the 37th lap and the Safety Car was back on the track.

At the top, Hamilton ran fastest laps again and again, but Ricciardo was close behind him, just waiting for the right moment to get in front.

Sauber’s Felipe Nasr was also out after a racetrack fight with teammate Eriksson.

Hamilton’s tyres did a heroic work, keeping the world champion in front of everyone else. Teammate Nico Rosberg has to settle for the 6th position. Torro Rosso’s Ricciardo and Mexican Sergio Perez of Force India round up the podium in Monaco.

Prince Albert de Monaco, together with his wife, South African beauty Charlene, and former-actor now-racer Patrick Dempsey were spectators at the race.