It looks like the perfect miniature G-Class. But it has come a long way to look this way. Underneath that robust boxy shape, there still is the Suzuki Jimny DNA. The Japanese small-sized SUV has gone through a major makeover.

You might be puzzled watching the photos, but no panic. It is just the first series of tuning packages for the new Suzuki Jimny. A Japanese tuning company performed the makeover that turns the tiny Jimny into the massive G. A G-Class wannabe, as a matter of fact.

DAMD, a Japanese-based tuning company, got the previous generation G 63 AMG as a muse, so the Jimny now gets the side exhaust pipe, similar to that of the German Panzer. 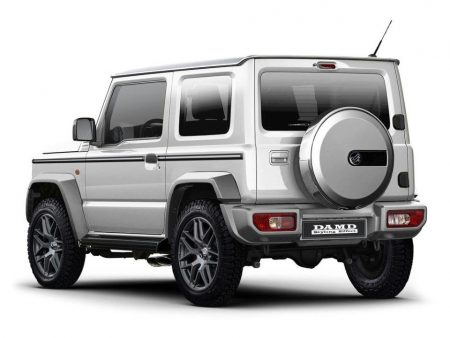 The original round headlights are a great helping hand, but of course, it was impossible for the tuners to move the move the turn indicators from the wings to the top of the bonnet. Prominent wheel arches and solid sills are also a welcome addition.

The spare wheel at the rear kept its ground, on the tailgate, because it has always been something the two had in common, but it gets the case similar to that of the German off-roader.

Underneath that straight bonnet, there is no 4-liter V8 though. There still beats the 1.5-liter gasoline Suzuki heart.

DAMD also gives the possibility to the bravest of customers to turn the Jimny into a Land Rover Defender.