G-Class and Unimog – Off-road giants on the same team

The G-Class and the Unimog have started on an adventure together. With personality and tradition up their sleeves, the two have been captivating fans worldwide for decades. They are now on the same team.

The G-Class comes from the passenger car sector. The Unimog leaves behind its segment of commercial vehicles. The with their military looks and go-anywhere personality, they boast longevity as only few vehicles out there can. The G is celebrating its 40-year anniversary this year, while the Unimog has been around for more than 70 years. 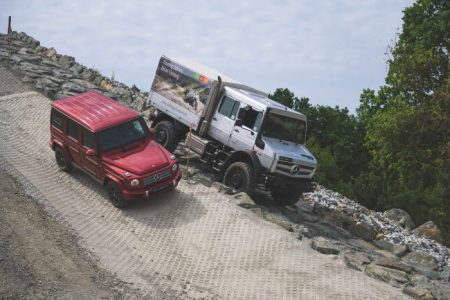 They feed the unlimited appetite for adventure of those behind the wheel. Their territory begins where most of vehicles decide to stop and turn around, due to their impressive off-road capabilities. Their robustness, durability and personality have made them Hollywood stars, showing up in blockbusters such as “Jurassic World” of 2015 and “Transformers: The Last Knight” from the year 2017, when the two of them even shared the screen.

The G-Class currently on the market celebrated its world première in Detroit in January 2018 with Arnold Schwarzenegger on stage, as the actor is an enthusiast of the model. And not only of the G, since he also owns a Unimog.