A modified Mercedes-AMG GT will show up in the Japanese summer movie, Kamen Rider Drive, as the car of a mutant cyborg. The car with the TRON-like paint scheme is now called NEX Tridoron and will be staring in the new installment entitled „Kamen Rider Drive: Surprise Future”.

NEX Tridoron will definitely have an impact on the movie plot, according to the information provided at the press conference held in Shizuoka. The car first made an appearance at the Fuji Speedway in Japan. 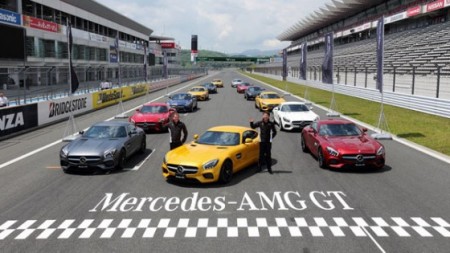 The vehicle is based on the Mercedes-AMG GT and will be driven by a mysterios enemy coming from the future and intruding on the present. Apparently, the Mercedes fans will have quite a reason to support the villain!

One day, the antagonist goes back in time and claims that the Kamen Rider Drive system will bring an end to the world in the near future. The villain and the villain’s killer Mercedes will put the hero to the test. Will the Kamen Rider save the world all over again? That remains to be seen. 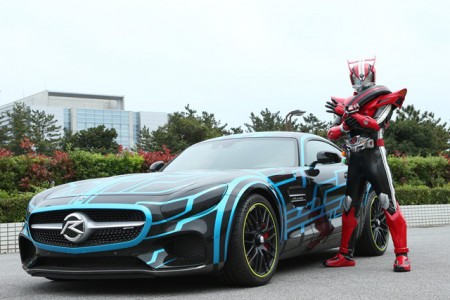 For all of those who did not grow up watching Japanese manga, Kamen Rider (Masked Rider) is a superhero in a science fiction TV series, created by the manga artist Shotaro Ishinomori. It made its TV debut on April 3, 1971 and ran until February 10, 1973. The series action takes place in a world plagued by Shocker, a mysterious terrorist organization. Takeshi Hongo and Hayato Ichimonji become Kamen Riders after escaping the terrorists, right before being brainwashed and turned into mutant cyborgs.

Although Mercedes-Benz often provides cars for action movies like the “Jurassic Park” and the “Die Hard” series, this is the first time it has provided one for a Japanese film.

The movie with the Mercedes sports car in the spotlight will premiere on August, 8 in Japan. Meanwhile, the car will be displayed at the brand-new Mercedes me Store at the HANEDA International Airport in Tokyo.