The future Mercedes-Benz S-Class is inching closer to its official reveal. Meanwhile, the premium car company shows the luxury sedan in yet another teaser.

The official presentation of the future Mercedes-Benz S-Class is indeed a highly-anticipated event in the car industry. Rivals are all eyes and ears to behold what is designed to be the world’s most advanced model. Will it be so? There is only one way to find out. The premium car maker reveals the year’s most sought after luxury car on September 2nd, at 2:00 p.m. (CEST) on the digital platform Mercedes me media. The recording of the video will eventually be available on demand.

An innovation in itself, in terms of support, safety and interaction, the future Mercedes-Benz S-Class is preparing for the grand finale of the teaser campaign. The “Meet the S-Class DIGITAL”, that has been playing for the past few weeks, is now coming to an end.

Top management members have been trying to help the enthusiasts of the brand experience what the S-Class will be. Ola Kallenius, Chairman of the Board of Management of Daimler AG and Mercedes-Benz AG, takes viewers on an exclusive test drive. Meanwhile, Gorden Wagener, Chief Design Officer of Daimler Group, reveals the details of the design philosophy of the sedan.

The future Mercedes-Benz S-Class will be the first series production vehicle that will roll off the assembly line of the “Factory 56”. The assembly line will start operating on the very day of the official reveal of the sedan.

The car that will take driving experience to a whole new level will feature the latest version of the MBUX (Mercedes-Benz User Experience). The system identifies the passenger from the driver and, more than ever before, it is capable of high interaction and customization. 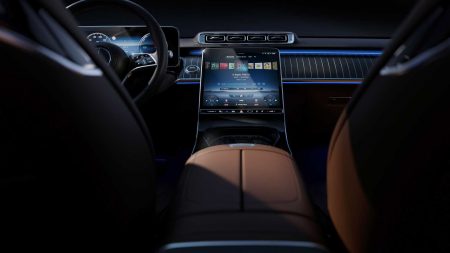 Mercedes-Benz claims the cabin of the car will be a “private refuge between home and work”.

As usual, the S-Class will up its game in terms of safety being a standard as it has been since it arrival on the market. It will be the first ever series production model to feature rear-seat airbags for the rear passengers.