Strange show in the streets of Belgrade! People gathered around a Mercedes-Benz C-Class Coupé to see how the owner, a Serbian business man, complains about the services of the three-pointed star company.

The furious owner of the coupe took his car to the streets of the Serbian capital and displayed the messages he had stuck onto the body. “Mercedes is trash, 30,000 km clutch set not supported by warranty” is the text that he tried to get his message across by. 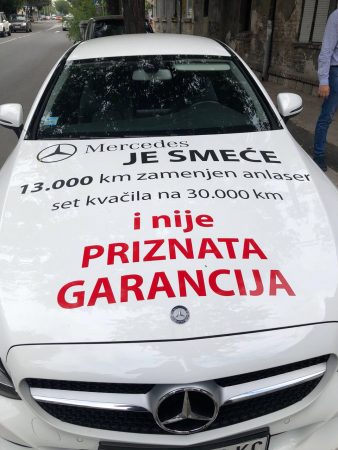 The Serbian customer claims that his car got a fault clutch at 30,000 kilometers (18,600 miles). And that was not it, as the white coupe also suffered a faulty starter at 13,000 kilometers (8,000 miles). None of the faults was covered by warranty, so the Mercedes-Benz subsidiary refused to cover costs for the replacement of the defective parts, claiming improper use. The owner, of course, has a different perspective, so he wished to show it.

He is not the first customer unable to manage the relationship with the premium car maker. Three years ago, a Mercedes-Benz S-Class owner took his anger to the streets of a Korean city and smashed the luxury sedan with a golf club. Check it out right here: