GLK is dead, long live the GLC! Mercedes’ line-up positioning aside, nothing connects the new model and its predecessor, as is the norm, anymore. Not even the name and the design are no longer related to each other. But was it a good idea to start from scratch? Let’s find out. Full test 2016 Mercedes GLC 220 d 4Matic.

The rebel spirit of the former GLC together with its boxy allure, so cheerfully reminiscent of the legendary G-Class, are history now. Sure, they will be missed, but even so, we can’t deny the GLC’s newly-found charm. Mercedes’ latest SUV is a true exercise in modernity, complete with a more harmonious design and a raft of sporty accents. Aerodynamics have certainly played an important role here with the GLC incidentally holding the class record in this regard with a Cx of 0,31.

But what is Mercedes hiding under all that haute-coutoure outfit? Well, as expected, an equally modern platform, none other than the MRA modular architecture, of C-Class fame – yes, that’s where the C letter comes from. The 2.873 mm wheelbase is in return 33 mm longer than the C-Class’ while the tracks are also wider, at 31 mm in the front and 47 mm in the back. The overall dimensions are also larger, at 4656 mm long, 1890 mm wide and 1639 mm high – 120, 50 and 9 mm more than the old GLK. In comparison, a BMW X3 is 1 mm shorter, 9 mm narrower and 21 mm taller. Fortunately, a larger body doesn’t bring a weight penalty too, as the intelligent mix of materials (high-strength steel structure and aluminum clad front fenders, engine hood, roof and suspension mounts) helps the GLC save as much as 80 kg compared to its predecessor. 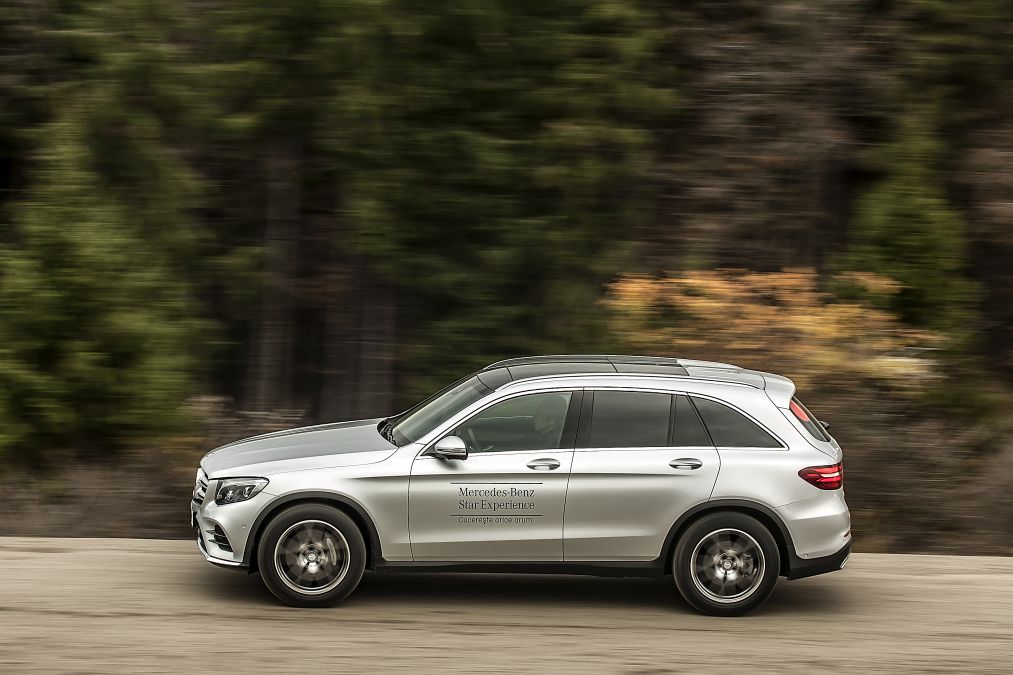 So, can all these figures translate into the actual joy of living alongside a GLC? The answer is yes. The moment you step aboard you agree Mercedes’ latest SUV is a true family car which welcomes you with five sumptuous seats and just as ample luggage space: 550 liters. Rear passengers benefit from a 57 mm increase of knee room and another 28 mm in the shoulder area (1.436 mm). Head room is also best in class. Comfortable, the back seats seem to cater even for the more demanding people, all thanks to its large base cushion and well-judged angle made with the back of the bench. The middle seat is not tailored for large adults, though, as the transmission tunnel eats up significantly into the feet area. The good mood is kept alive by the generous panoramic sunroof running almost the entire area of the roof (1.689 euros).

The practical side was also carefully though out. Folding the rear seats is an easy task with the 40/20/40 divided sections falling automatically at the simple push of either of the the four dedicated buttons, two at the very edges of the bench and the other two at the outer extremities of the luggage compartment. The resulting loading area is perfectly flat, maximum loading volume growing from the standard 550 liters to a more cavernous 1.600 liters. Airmatic air suspension equipped models also benefit from another convenient feature. A button in the trunk commands the back to lower itself by 40 mm, to ease the ingress of bulky items.

The driving position hits the right balance between the raised seating philosophy inherent to the SUV DNA and the sportier ambitions raised by the aggressively penned exterior. Not too low, but not too high, as a result, complemented by good all-round visibility – though not as good as that offered by the impossibly boxy GLC of old. The ample side mirrors and surprisingly thin pillars certainly help. The seats themselves are also comfortable for even the longest of journeys, lateral and lumbar support being top-notch. 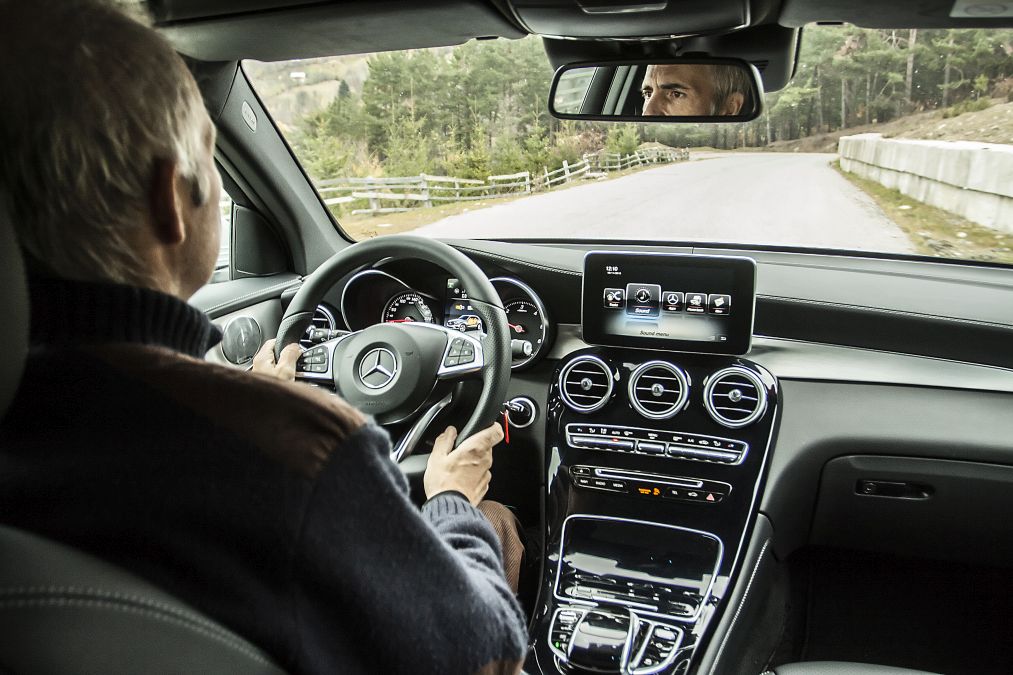 Ambiance. This must the biggest link between the GLC and its smaller C-Class cousin. Anyone who has driven the mid-size limo before will certainly feel right at home with almost the entire interior, starting with the dashboard and ending with the door panels, decor and seating. On the ergonomics side, the GLC is also eerily similar to its platform donor. The standard Audio 20 infotainment system inherits the same rotary controller and 7 inch color screen. The menu structure is simple and easy to live with, though not as intuitive as that offered by BMW’s iDrive. Navigation is extra and comes together with a bigger 8,4 inch display as part of the Command Online system, priced at 3.510 euros. A cheaper Garmin sat-nav upgrade (595 euros) for the Audio 20 system is also available. Exquisite/high-tech accents like the color Head-Up Display (1.178 euros) and leather covered upper-part of the dashboard (535 euros) are part of the options menu and certainly worth every penny. Fit and finish are also praise-worthy and, subjective or not, definitely ahead of any rival at this moment. 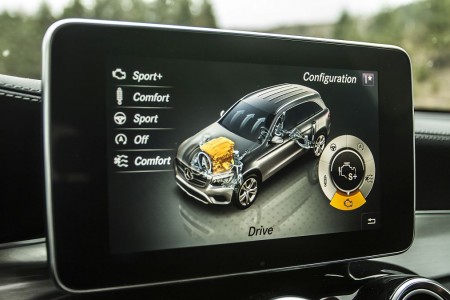 And so is the sophisticated Agility Control adaptive suspension with four arms at the front and five at the back. The variable damper rate function is standard alongside the fully-configurable engine, transmission and, again, suspension settings as part of the Dynamic Select system and its five dedicated programs: Eco, Comfort, Sport, Sport Plus and Individual. 2.261 euros. This is what the ticket to happiness costs. Yes, this is the price Mercedes is asking for the Air Body Control air suspension which comes with not one, but three chambers, an unique feat in this segment. The accompanying Adaptive Damping System Plus system with separate dedicated modes allows the ground clearance to modify itself automatically, according to the driving conditions. With 181 mm in its standard setting, this can either be lowered by 15 mm in Sport or Sport Plus modes or it can be increased by the same value in Off-Road or Incline modes or even by as much as 50 mm if the GLC in question is specified with the Off-Road Engineering Package (702 euros) which also brings an extra mode, called Rocking Assist. So, the maximum ground clearance the GLC can offer is 227 mm. 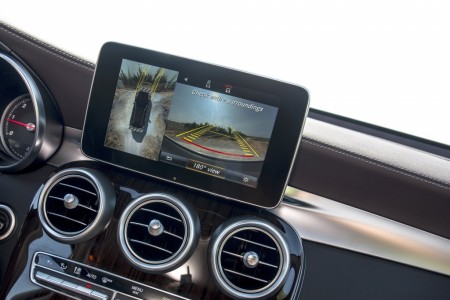 The 4Matic permanent all-wheel drive system is standard, intelligently varying torque between the axles in a sporty 45-55% ratio. Under the guidance of the efficient electronics on board (ESP, ASR, DSR), the GLC is surprisingly apt outside paved roads and can travel much further beyond the point an equivalent X3 would simply call it a day. This is proved by the good approach and departure angles, rated at 30,8 and 24,8 degrees. But wait, this is not all. GLC is also debuting a class-first 360-degree angle bird-eye system, with four cameras including a front-facing video camera which basically eliminates blind-sports and shows everything a driver needs to tackle difficult terrain. 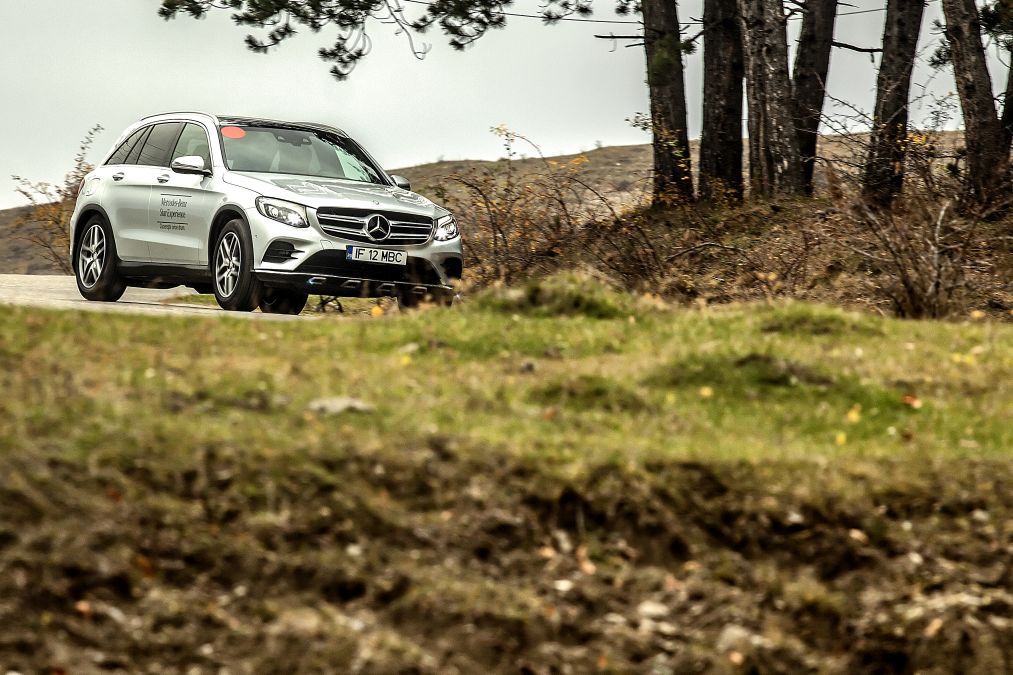 With its ample torque of 400 Nm on tap, available from as low as 1.400 rpm, this is an engine which sets itself apart from the competition with its relaxed, debonair attitude. Impressively flexible and equally refined, the 2,1-liter diesel is everything a modern family man will ever ask. It might not be as fast as the rivaling X3 and its 190 HP unit, but it certainly makes up for this with a subdued note, hardly audible even at idle or at highway speeds, when the GLC 220 d will basically stroll along at no more than 1.500 rpm in the ninth gear.

Yes, you’ve read that right. The all-new 9-speed 9G-Tronic transmission, Mercedes’ technological crown jewel, is now standard across the range and, in fact, the only option available at debut. As a result, the GLC becomes the first-ever mid-sized SUV to give up manual transmissions completely. A genius move, confirmed by the surprisingly low consumption figures reached in real traffic conditions (6,5-7,5 l/100 km) and by the swift progress made by the state-of-the-art unit between the nine gears on tap. 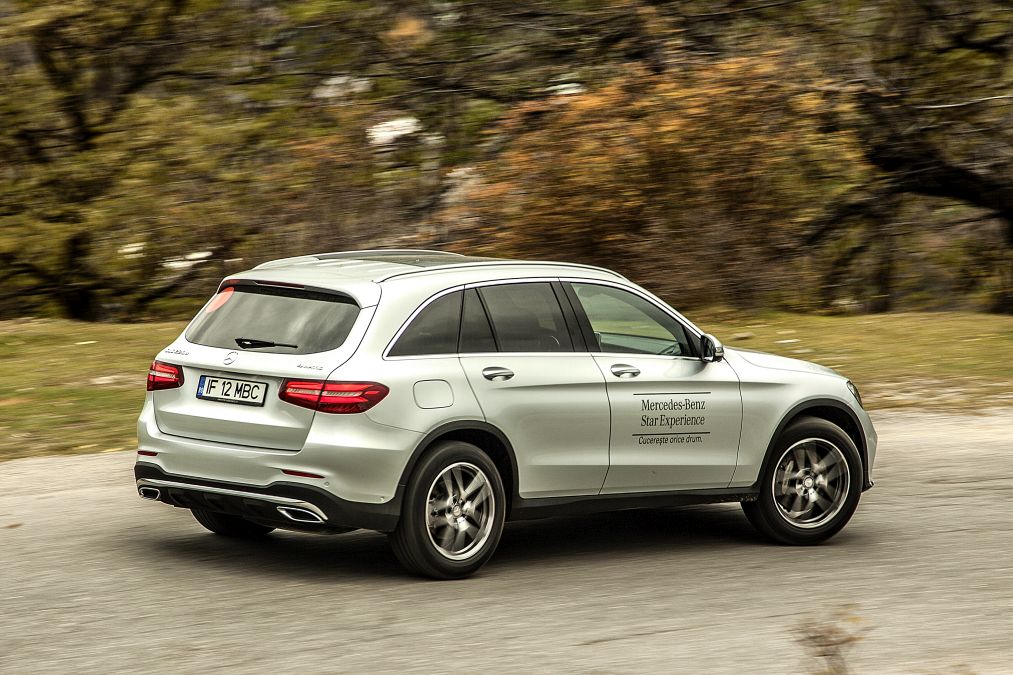 This brings us to the inevitable question. How does the GLC drive? Dynamics-wise, the biggest surprise must be the consistent, progressive feedback offered by the steering, which brilliantly manages to give the driver back its much-wanted direct connection with the car and, implicitly, its reactions to his every input. Easy to hone, the GLC can indeed provide surprising levels of satisfaction for what is essentially a tall SUV. Blessed with a generally neutral character and quickly repressed understeering tendencies, the GLC is always agile with little to no roll displayed in even the tightest of corners. In sweet Mercedes fashion, comfort is second to none, the Air Body Control suspension simply confirming the GLC’s will to present itself as a mature family car, sufficiently sporty to tackle but not surpass BMW and its X3 in the driving pleasure arena.

Delightfully refined and agile, the all-new Mercedes GLC confirms all expectations, reseting the scale of values in the mid-sized premium SUVs segment. Today, right now, right here, no other rival can equal its broad spectrum of talents. No, not even the mighty X3 can match the blend of stile, quality, comfort, dynamics, efficiency and excellent off-road abilities the GLC has to offer.