Is the Plug-In Hybrid a viable solution for the future? The comparison test between Mercedes S 500 Plug-In Hybrid and S 350 Bluetec tries to provide an answer to this question.

Mercedes-Benz gambles on the hybrid solution, at least concerning the S-Class, that already surpasses Lexus’ offer not only by version numbers, but also if we take a look at the available technologies on board. No other premium car manufacturer has such a complex offering of hybrid cars in the premium segment. 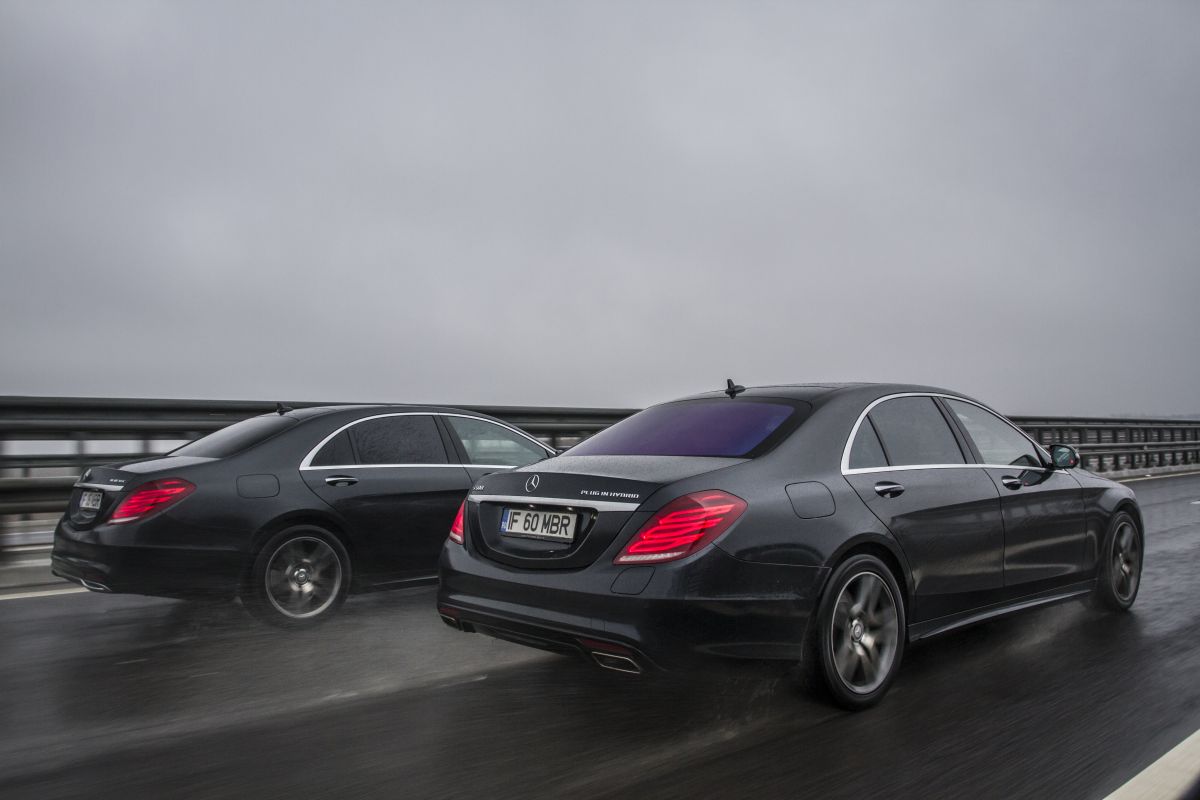 Among other hybrids such as the S 300 BlueTec Hybrid (the turbodiesel 2.1 litre engine that delivers 204 HP is mated with an electric engine that produces 27 HP), the S 400 Hybrid (a petrol V6 3.5 litres engine with 306 HP is combined with an electric engine of 27 HP), Mercedes-Benz offers a Plug-In Hybrid combining the V6 bi-turbo 3 litre engine that delivers 333 HP with an electric engine that produces 116 HP. The assembly as a whole delivers 442 HP and a maximum torque of 650 Nm. Mercedes-Benz aggressively promotes this model, making it available at the same price as the S 500 equipped with the bi-turbo, 4.7 litre V8 that delivers 455 HP and 700 Nm. 109,777.50 euros including VAT is the price for the long wheelbase version of the S 500 and the S 500 Plug-In Hybrid, as the hybrid is available only in the long wheelbase version. 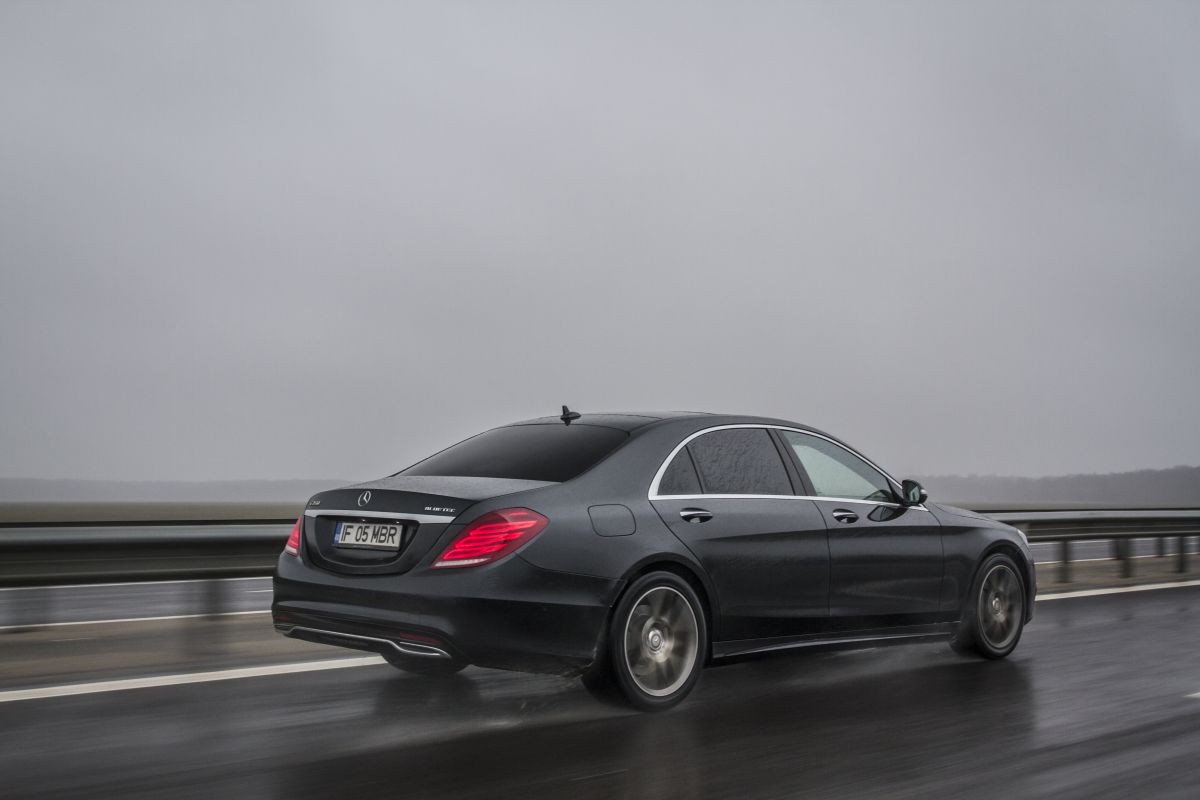 The official fuel consumption values, that are based on the NEDC cycle, which is in favour of the hybrid models (the measurements are done with the battery fully loaded), show that S 500 Plug-In Hybrid is more efficient: 2.8l /100 km compared to the 8.6 l/100 km for the S 500.  None of these values can be actually achieved in real life, where the hybrid is clearly more efficient especially in the urban environment, given that it is 0.4 seconds slower when it accelerates from 0 to 100 km/h compared to the S 500 in long wheelbase version. 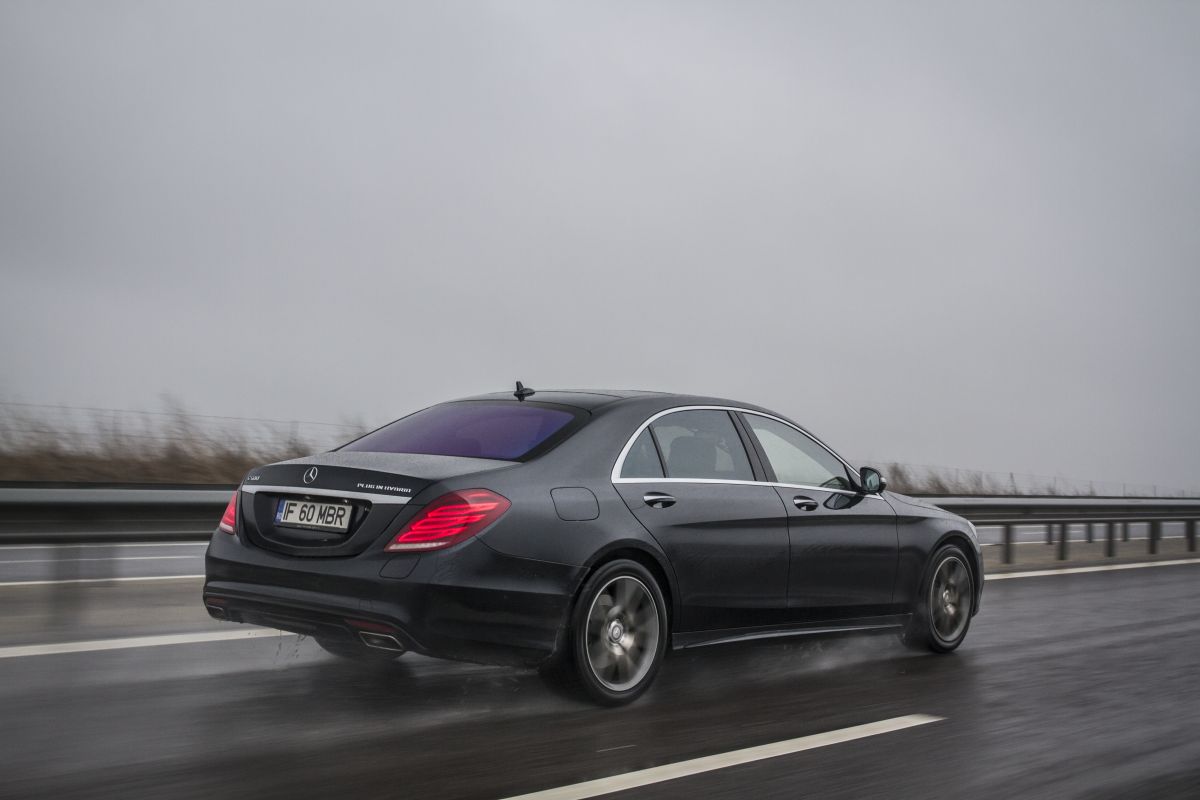 The official fuel consumption values indicate 5.6 litre/100 km for the diesel version and 2.8 l/100 km for the hybrid. Now, the question is – are they are real or not?

Thus, we conducted a fuel consumption testing with these two cars on urban and interurban areas.

S 500 Plug-In Hybrid has four operating processes for the hybrid system – E-Mode, E-Save, Charge and Hybrid and three modes for the 7-speed automatic gearbox (the electric engine is integrated between the gearbox and the heat engine): Efficiency E, E+ and Comfort C.

The four operating processes for the propulsion system are very different one from the other and that’s why we measured the urban fuel consumption in two very distinct situations and each time the gearbox was set on E+ mode:

There is also the E-Save mode, extremely useful if you want to use the battery after certain miles on a long journey. Let’s suppose that you left the city and your intention is to get to a destination which is 400 km far away, passing through another city. You switch on the E-Save mode and only when you drive through the intermediate destination you switch again on the E-Mode. Thus you can use the battery energy at a later stage with remarkable economy.

Charge, the fourth mode is not the most productive, but the heat engine can recharge the battery if you forgot to do this at home. At home you can charge the 8.7 kWh battery in 4.1 hours from a traditional 220V Plug-In or from a wallbox in only 2 hours.

But let us get back to the E-Mode and Hybrid modes.

In the first situation, we left with a 95% charged battery at 7 degree temperature. Mercedes-Benz announced an electric autonomy of 33 km. Last year at the international launch in Copenhagen, we managed to drive 26 km in electric mode, but this happened at 17 degrees temperature and in a more smooth traffic flow compared to now, so we didn’t have to brake or to accelerate that often. This time we succeeded in driving 14 km in electric mode out of the 19 km of our urban route. For the final 5 km, the car automatically switched to hybrid mode, but at the end of the 19 km, the bord computer showed a average value of 2.9 l/km.

Compared to Lexus, it’s rather comfortable to drive only in electric mode because Mercedes-Benz innovated in a smart way, setting a point on the throttle where the heat engine won’t start. The petrol engine will start only when pressing further over this point.

In comparison, on the same urban route, the diesel needed 10.9 l/km. What happens with the hybrid if the battery is only 20% charged? In this case, the car covered less distance in the E-Mode and the hybrid mode came much faster into action. The outcome: 11,6 l/100 km, slightly more than the diesel.

Thus, in urban areas, the conclusion is quite clear. If you leave home or work with fully charged battery on a 15-20 km long route, the Plug-In Hybrid is the future, surpassing even the efficient diesel.

What happens outside the city? Here, the electric mode is not that important anymore because we talk about longer distances and other travelling speeds. Now, it all  comes up to hybrid system management, which is truly revolutionary on the S 500 Plug-In Hybrid.

For instance, when typing a destination on the navigation system Comand Online, the hybrid system will independently manage the battery’s resources. On declivities the car will use the battery’s energy in order for the electric engine to sustain the heat engine, and when descending, the system will recover energy. But there is an even better saving mode.  The sensors measure the distance and the speed difference compared to the front car, transmitting a double signal in the throttle so that the driver takes the foot off the throttle. In this case, if the car ahead of you won’t slow down, the S 500 Plug-In Hybrid enters the “sailing” mode and the heat engine declutches from the transmission. If the car ahead of you slow down,  the S-Class brakes also using the Distronic and recovers the braking energy. Not to disturb the driver, the double signal in the throttle appears only when speeding at more than 60 km/h.

With 50% charged battery when using exclusively the Hybrid mode, the S 50o Plug-In Hybrid showed a value of 5.3 l/100 km on the 76 km in extra urban route which pass on national roads.

In comparison, the diesel needed 6.5 l/100 km. And we weren’t exactly slow, with 66km/h on average, while maintaining the speed limitations of 50 km/h speed limit in the villages that we drove through and 90 or 100 km/h outside villages.

Thus, the conclusion is clear for the interurban route: On long distances the Plug-In Hybrid is more efficient.

Of course, the Plug-In Hybrid is also more expensive: 109,777.50 euro compared to 87,286.50 euro for the diesel version. A difference of almost 22,500 euro. But the hybrid is not only more efficient, but it’s much better equipped and more refined.

The V6 diesel from the S 350 BlueTec is currently one of the most refined diesel engine on the market, and the S-Class is probably the best soundproofing luxury saloon in the world. The maximum torque of 620 Nm is available from 1,600 rpm and 80% of it is ready even from idling speed.

The S 350 BlueTec accelerates very linear and progressively without much effort. We couldn’t have wished more from a diesel.

The hybrid assembly on the S 500 Plug-In Hybrid is simply more refined. The electric engine’s torque supports the heat engine and the acceleration makes it feel like a real TGV. The pulling force is outstanding, very similar to the electric propulsion. When using the electric engine the overall calmness sensation is perfectly blended with the requirements of the luxury class.

The dynamic performances are not negatively influenced not even by the 240 kg kerbweight excess (2.215 kg compared to 1.975 kg for the diesel version). Only in fast bends, the rear part of the hybrid has somehow a little inertia because of the heavy battery that weighs 180 kg, mounted in the trunk, behind the rear seats.

But this is only marginal and it appears only in a tight and quick turns. On the other hand, the only disadvantage of this hybrid could be the volume of the trunk,  because it is 115 litres smaller. S 500 Plug-In Hybrid trunk’s volume is 390 litres compared to 510 litres for the S 350 BlueTec.