From mild to wild – The Mercedes-Benz Sprinter Extreme

It is almost eight feet tall and over 20 feet long and it looks as if it just came out from Jurassic Park. What you’ve got in front of your eyes is the Mercedes-Benz Sprinter Extreme, built with the assistance of RENNtech, that turned the mild van into a wild truck.

A custom roof, six forward facing lights and a military muddy camouflage bring the Sprinter Extreme into the spotlight.

It is based on the Sprinter 3500 Cab chassis, powered by a 2.1-liter 4-cylinder BlueTec diesel engine with only 161 HP and 265 lb-ft of torque combined with the 7-speed 7G-Tronic transmission. But there must be some magic trick under the hood to help the Sprinter carry around 6,400 pounds on its frame – best in class payload capacity – or tow up to 7,500 pounds.

Used as an RV, bus or ambulance in its standard guise, when it’s got no Jurassic Park vinyl on every bit of the chassis, it is shod with G-Class inspired beadlock wheels wrapped in meaty tires and sports big fender flares.

The dump-bed of the dump-truck Sprinter is a Scattolini ScattoMaax, able to ditch the load directly behind or off to either side. To counterbalance the motion, RENNtech has added the “load-adaptive” stability control system, a feature that brakes individual wheels to compensate sliding, oversteer or understeer to the truck already fitted with ESP. 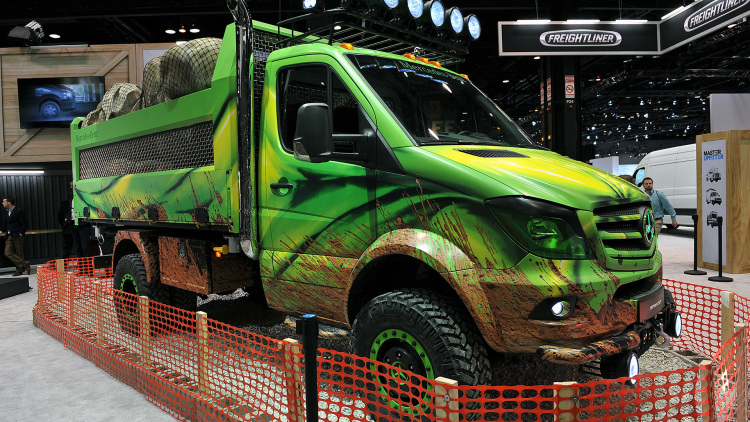 “The Sprinter Extreme concept has super-strength, unlimited hard-working capability and an aggressive design. Unlike most concepts, the foundation for the Sprinter Extreme can be ordered at a Mercedes or Freightliner dealership today with the help of our MasterUpfitter program”, says Bernie Glaser, Vice President of Mercedes-Benz Vans in the USA.

The Sprinter Extreme Concept is displayed at the 2016 Chicago Auto Show this week.

Now… anybody planning to move or renovate anytime soon?