This high-tech Mercedes GLC variant will offer the unique combination between a fuel cell drive-train and an electric motor – a so-called F-Cell propulsion system with a range of about 500 kilometers. The power source for the electric motor is a 13,8 kWh lithium-ion battery.

The fuel cell drive system is mounted at the front, while the electric motor and the battery are placed above the rear suspension. The hydrogen tank is also found at the back, sitting low below the floor, under the rear seats.

The compact drive unit was designed to fit under the hood of the conventional GLC. Contrary to previous fuel cell modules used by Mercedes for the B-Class, the space required for the new unit is now 30 percent smaller. All this while system performance has increased by 40 percent and manufacturing costs have been significantly reduced.

The battery can be easily charged at home or at work, while the network of hydrogen filling stations which amounts to 34 locations in Germany is currently still very thin. The hydrogen tank can be refueled in around three minutes. 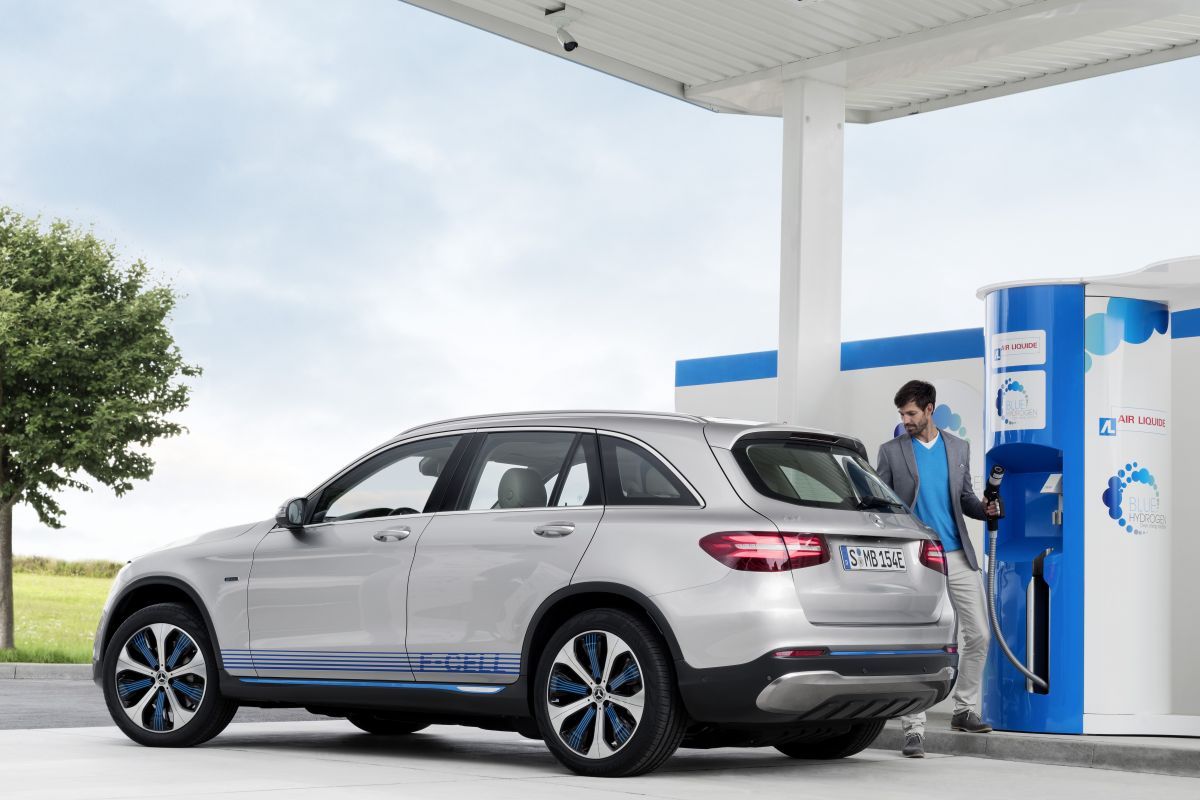 The GLC F-Cell represents a world first in which a fuel-cell-operated electric car uses a lithium-ion battery as an additional energy source that can be externally charged by means of plug-in technology. Through intelligent interplay, the two energy sources drive the electric motor while offering locally zero emissions driving pleasure. The long range, short refuelling time, an output of 147 kW (200 hp) and the latest generation of assistance systems with powertrain-specific features demonstrate, based on the models on show, that the GLC F-CELL will be a family-friendly electric vehicle of high everyday practicality.

For this world first, the Mercedes-Benz engineers cooperated closely with partners from the Daimler competence network to develop a completely new fuel-cell system. Compared with the B-Class F-CELL, which has been on the market since 2010 (fuel consumption: 0.97 kg H₂/100 km/CO₂ emissions, combined: 0 g/km), the overall drive system offers around 40 percent more output. The fuel-cell system is around 30 percent more compact than before, can for the first time be housed entirely in the engine compartment and is installed on the usual mounting points like a conventional engine. Also, the use of platinum in the fuel cell has been reduced by 90 percent. This conserves resources while lowering the system costs – with no compromises in terms of performance.

The lithium-ion battery in the preproduction vehicles on show has a gross capacity of 13.8 kWh and additionally serves as an energy source for the electric motor. For the first time, it can also be charged externally using plug-in technology. An intelligent operating strategy in combination with the fuel-cell/battery system offers maximum efficiency and comfort. Just like the drive motor, the powerful storage battery is space-savingly installed in the rear of the SUV. By means of the 7.2 kW on-board chargers, it can be conveniently charged from a standard household power socket, a wallbox or a public charging station. The charging time is around 1.5 hours if the full capacity is used. 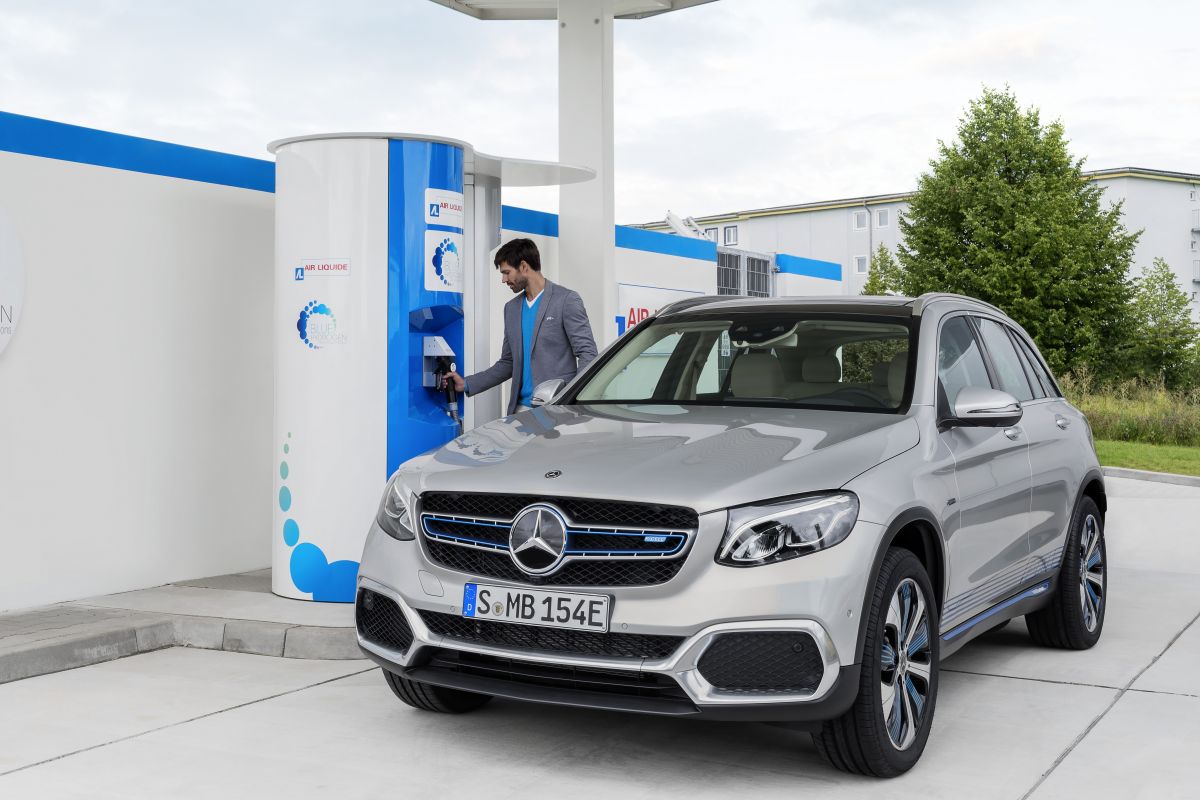 Two carbon-fibre-encased tanks built into the vehicle floor hold around 4.4 kg of hydrogen. Thanks to globally standardised 700 bar tank technology, the supply of hydrogen can be replenished within just three minutes, which is about the same amount of time it takes to refuel a car with an internal combustion engine.

The F-CELL vehicles on show at the IAA are powered by an asynchronous machine with an output of 147 kW (200 hp) and a torque of 350 Nm. As the electric drive requires no propeller shaft, this makes room for one of the two hydrogen tanks, while the second tank is installed under the rear seat bench.

Advantage over conventional fuel cell cars: Thanks to the electric motor, the GLC can also gain energy generated during braking.

The innovative plug-in fuel-cell powertrain combines the advantages of both emission-free technologies and, thanks to its intelligent operating strategy, constantly ensures that the use of both energy sources is optimally adapted to the particular operating situation. 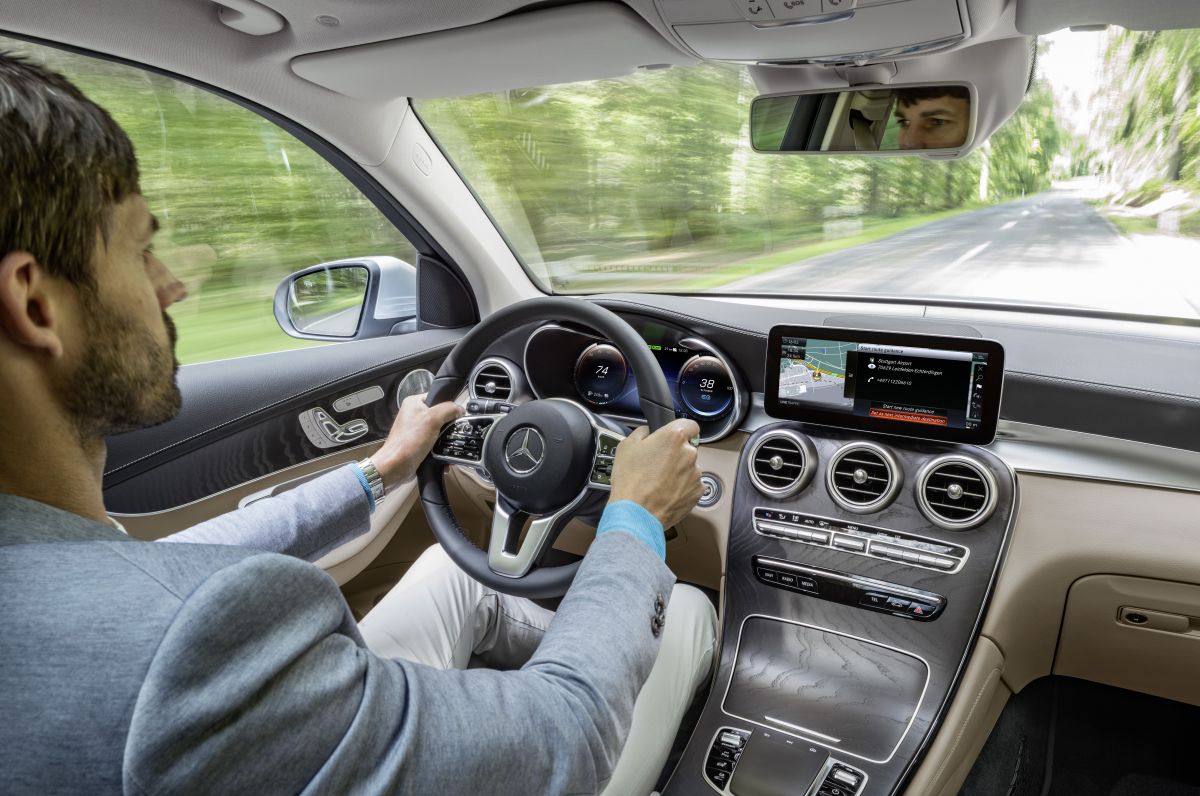 In HYBRID operating mode, the vehicle draws power from both energy sources. Power peaks are handled by the battery, while the fuel cell runs in the optimum efficiency range. The intelligent operating strategy means that the characteristics of both energy sources can be ideally exploited. In F-CELL mode, the state of charge of the high-voltage battery is kept constant by the energy from the fuel cell. Driving almost exclusively on hydrogen is the ideal mode if the intention is to keep the electric range in reserve for certain driving situations.

In BATTERY mode, the GLC F-CELL runs all-electrically and is powered by the high-voltage battery. The fuel-cell system is not in operation. This is the ideal mode for short distances.

In CHARGE mode, charging the high-voltage battery has priority, for example in order to recharge the battery for the maximum overall range prior to refuelling with hydrogen. This mode also creates power reserves for uphill or very dynamic driving.

In all operating modes, the system features an energy recovery function, which makes it possible to recover energy during braking or coasting and to store it in the battery.

The cockpit will be further enhanced by the instrument cluster in the form of a full display with 12.3-inch diagonal. Information from the COMAND system is presented on the 10.25-inch central display. The menus and indicators on the displays are geared to the functionality of the combined fuel-cell/battery powertrain. The new-type design style clearly differentiates the fuel-cell vehicle from the conventional GLC. New in the GLC F-CELL is the multifunction touchpad with handwriting recognition, which celebrates its world debut at the IAA in the unveiled preproduction vehicles. This newly developed feature allows telematics functions to be controlled by single- or multi-finger gestures (so-called Multitouch). The touchpad thus offers a full-function and innovative input option over and above LINGUATRONIC in combination with COMAND Online. The touchpad also makes it possible to enter letters, numbers and special characters by means of handwriting. Further control options are offered by Touch Control buttons on the left and right of the steering wheel as well as by voice control.

According to official plans, the Mercedes GLC F-Cell will be produced in an annual output of about 1,000 units, starting next year. Daimler is systematically working to prepare for series production of the Mercedes-Benz GLC F-CELL. With the current test fleet, the Mercedes-Benz engineers are taking the final key steps on the road to production start-up. Market-specific sales concepts, including a rental model, are being evaluated at present. Like the conventionally powered GLC, this family-friendly SUV of high everyday practicality will be produced in Bremen. 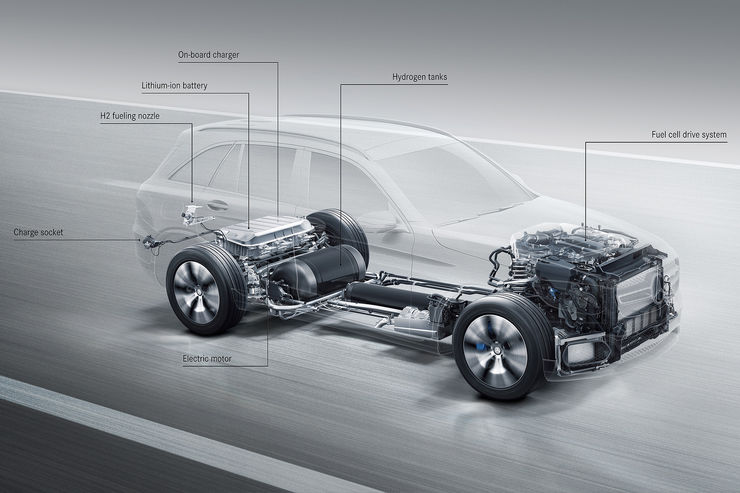