Elena Luchian, August 23, 2017
2.44K 0
Home Motosport F1 Formula 1 planning to get an autonomous Safety Car in the near future

The FIA is planning to ditch tradition of keeping one man at the lead of the peleton when the Safety Car is deployed. There will be no man in the lead, as the Federation International de l’Automobile is planning to get an autonomous Safety Car.

The head of technical development in Formula 1, Marcin Budkowski, talked about the Geneva-based FIA’s revealing the forum’s plans on a driverless safety car, in an interview with Motorsport. The choice would be made in order to promote self-driving technologies that most car makers are already working on.

“Let me give you an example, but it is not the only one: we have spoken about an unmanned safety car. It would promote a technology about which there is a bit of skepticism and, instead, it could be shown that it works”, Budkowski reveals.

“The safety car driver would no longer be essential, because it would leave the controls to the computer. But we must be aware of the attraction of Formula 1 race cars without drivers: the engineers would love it, but not the fans,” Budkowski said. 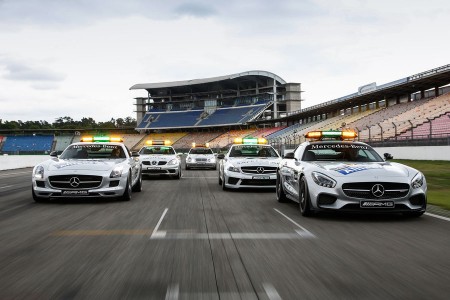 Bernd Maylander has been the driver of the Formula 1 Safety Cars for the past 17 years, only missing a single Grand Prix, after breaking a leg. So Formula 1 drivers, 3-time world champion Lewis Hamilton especially, will only have to blame technology when complaining that the pace car is driving way too slow and that the tires are running cold.

The Mercedes-AMG GT S with 510 horsepower is currently the Safety Car in Formula 1.