Bernd Mayländer knows them all… since he basically drove every Formula 1 safety car in the last decade. For us, he picks out the 5 most interesting Mercedes Safety Cars. Auto motor und sport mega test.

Mayländer, proffesional racer and Mercedes afficionado, refused to sit in front of the television and instead took the wheel of all the official cars leading the Formula 1 racing cars since 1996. His former employer AMG still has today a few earlier examples of the C 36 official Safety Cars in pristine condition, models replaced in a rushed move with their bigger counterparts, the E-Class. 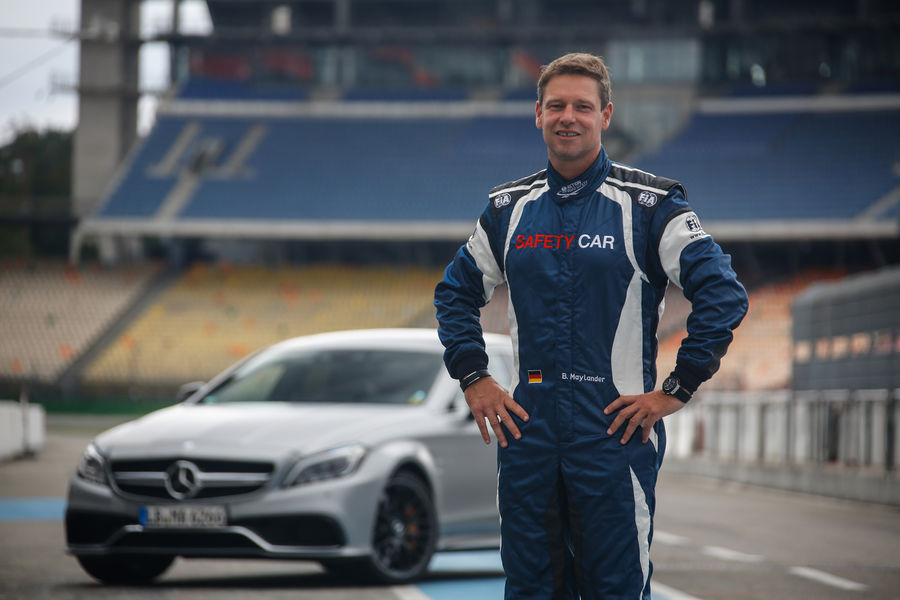 Frozen in time! “Even my flag was still there, S-BM 300, because I can still remember every detail,” the now 44-year-old recalls. He sounds as if he had already forgiven AMG for this maneuver. Not quite, since he had to serve on a much weaker, standard E-Class as a substitute.

And when he squeezed into the narrow driver’s seat of the CLK 55 AMG, Mayländer immediately jumps to the organic time machine, rewinding his memory to the end of the 90s. “My goodness, that was able to drive fast! And look at this giant wheel,” he exclaims, already rotating the ignition key. The 5.4-liter V8 engine thunders away.

The coupe came into service after 1997, and not to much fanfare distinghuishing features compared to the road vehicle – apart from the special lighting system, of course, which clarifies the status of the safety car, depending on the color. Flashing orange means absolutely no overtaking. The Safety Car would then have to queue in the middle, in front of the race cars. Then we have the green lights which signal the Formula 1 pilots that they may finally pass.

And when the entire field has gathered behind the safety car, Mayländer must step on the gas. “Of course, on TV it looks like the Safety Car is moving more slowly than the pace of the race, but as the tires of the cars must remain on temperature, the speed must not drop too far,” he explains. Therefore, the safety car moves often at the limit, something which is of course much lower set when the CLK 55 comes to mind as compared to the current Mercedes-AMG GT S. 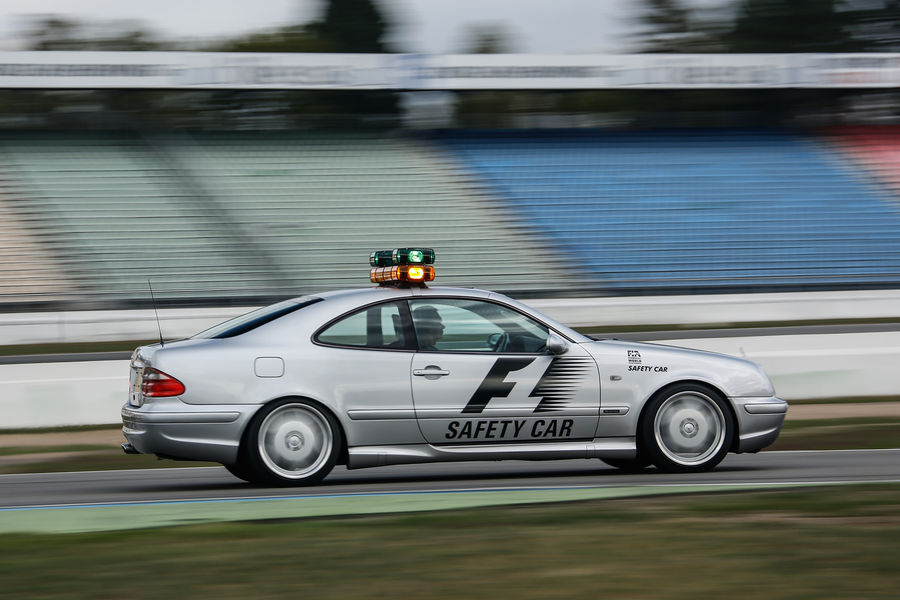 Let’s get back to the test itself. Mayländer torpedoes away all ambitions with a reasonable lap time and he is already in the pit lane, waiting for us. The CLK coupe with its not so prissy suspension tuning and the thundering sound of the 347-hp engine certainly refused to go out without a fight against Jacques Villeneuve, Michael Schumacher, Mika Hakkinen, David Coulthard and the rest of the VIP class.

During the CLK 55 AMG’s tenure, Mayländer sat back, because his job as a safety car driver started a bit later, by the forced recruitment of his company car, Mercedes. Bernd raced initially in DTM, then in the FIA ​​World Endurance Championship on the European racetracks.

CL55 was the first Mayländer Safety Car. “Only in 1999, Domingos Piedade, the then AMG CEO, addressed me at the Grand Prix of San Marino, saying if I could not drive in Formula 3000 I should just hop behind the wheel of the safety car,” says the racer. And in the following year Oliver Gavin, preferring to pursue his career in the US, retired from Formula 1, with Mayländer taking over his job as Safety Car driver. 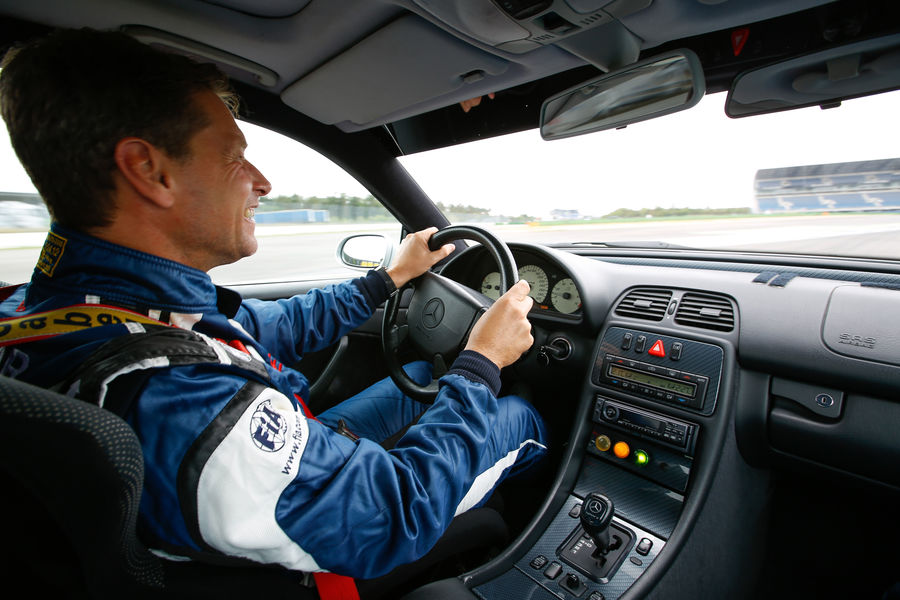 That doesn’t mean he didn’t get to drive the CLK 55 too: “I got one as a company car,” says Mayländer and grins. The safety car used at this time, incidentally, was a CL 55, including during the famous race in Hockenheim, when a bystander entered the circuit on lap 24, and later, when Jean Alesi collided his Peugeot with Pedro Diniz’ Sauber. In the opulent S-Class Coupe – which at that time was still called the CL – Mayländer slided on the standard leather chairs. “The modifications were manageable. We mostly a had an extra handheld radio, and at the end of the race the car was beeing driven on its own wheels back home,” he says.

Wild roar reverberates in the Motodrom, metallic, even desolate. Sags down the speed, as in the Sachs curve, bubbling and gurgling of the eight-cylinder naturally aspirated engine breaks the eering silence. Under braking, the rear axle will relieve users of responsibility with its unshakable traction. However, in light of the short wheelbase, Mayländer oversteer badly – ah, we forhot to mention he is driving the most unique Mercedes SLK ever. 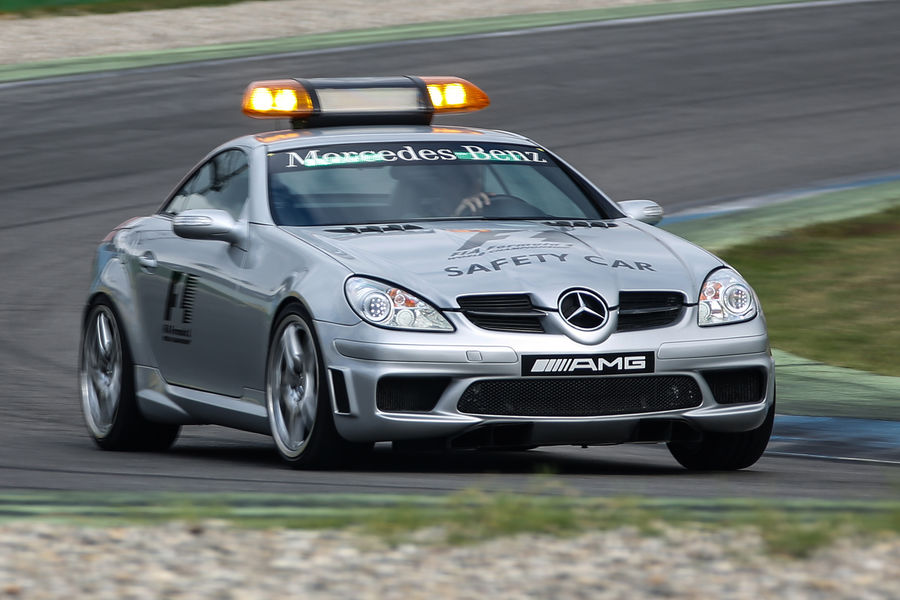 I beg your pardon? The Roadster whose mission was to perform spectacular hardtop acrobatics under the French riviera sun? Exactly. Between 2004 and 2005, the SLK 55 AMG took the reigns of Formula 1 Safety Car.

Compared to the 500 hp SL, the SLK course was down on performance: “But it was light and very agile, a really small mobile missile…” However, next to the production model yet something was missing: the muffler on the exhaust system. Thus, the two-seater mutated to … yes, to what actually? A beast on Ecstasy?

Mayländer still regrets today that the SLK spent only two years in service – on one hand. On the other hand: “Then came the CLK, then the SL with the new 6.2-liter V8. Especially the SL underwent quite a few modifications which affected the cooling system for the brakes, engine and rear differentials – and on top of that for the first time, the transmission with double-declutching function. 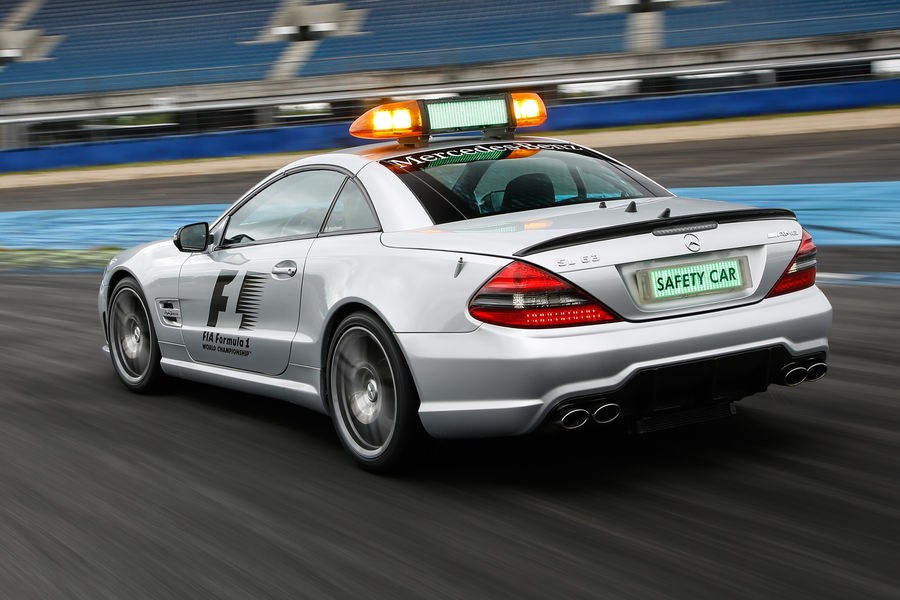 On the race track, the SL howls excited with his differential cooler, flashing vigorously its headlights and taillights. So pull the four-point straps tight, before going out on the track. Release the gas and the tail twitches slightly. Even on the competitively even surface it quickly becomes clear that what remained of the base ride comfort is as much a packet of biscuits in the hands of the crumbs Monsters. With similar greed rages the 525 hp engine, 7,000 / min and more. In a nutshell, the 1.7 tons two-seater can be at the end of the crossbar and before Sachskurve before the gun salute is over.

The third of the assembled safety car leaves its own mark. This is rather the angry tyrant as opposed to the humbler SLK, let alone in comparison with the stately CLK. From 2010 still more drama comes into play, which coincides with the debut of the first fully fledged AMG sports car. The SLS weighs less than the SL, the V8 makes 571 hp – and yet everything was suddenly very different. “You no longer need to change too much of the basis car. Bucket seats, light weight, that’s the principle. A true sports car, really,” says Mayländer. 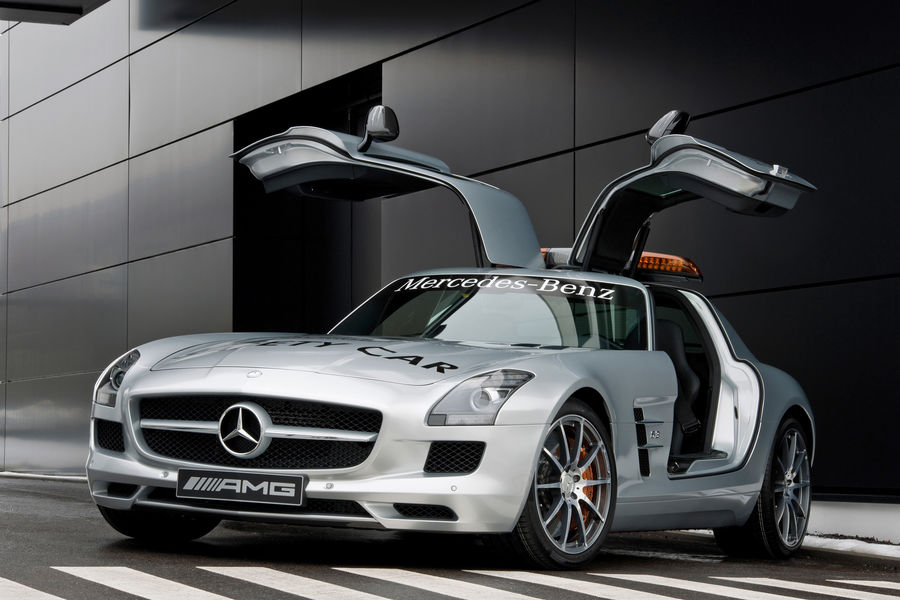 For our meeting at Hockenheim comes the meaner GT-evolution, complete with 591 horsepower, a revised chassis, but without the rabid exhaust tone of the old SLK – but Bernd Mayländer doesn’t regretted this: “Apart from the thundering effect of old, the new one indeed does not sound bad, you could get the SLK sometimes get on your nerves. ”

Apropos: Can the safety car give the formula 1 drivers a headache? “That may be, especially when some drivers have worked out a big lead against their pursuers. However, I do not try to annoy them” explains Mayländer.

Today he no longer needs to completely exhaust themselves against. “With the SLS and certainly with the GT S you can somewhat stay below the limit without the Formula 1 cars having to suffer. The potential of the new Mercedes-AMG GT S is enormous.” Sure, the GT S makes 510 hp instead of 597 like its predecessor, but it can also blow the turbochargers of the four-liter V8 with an intensity that only the fairy-wolves can dream of. 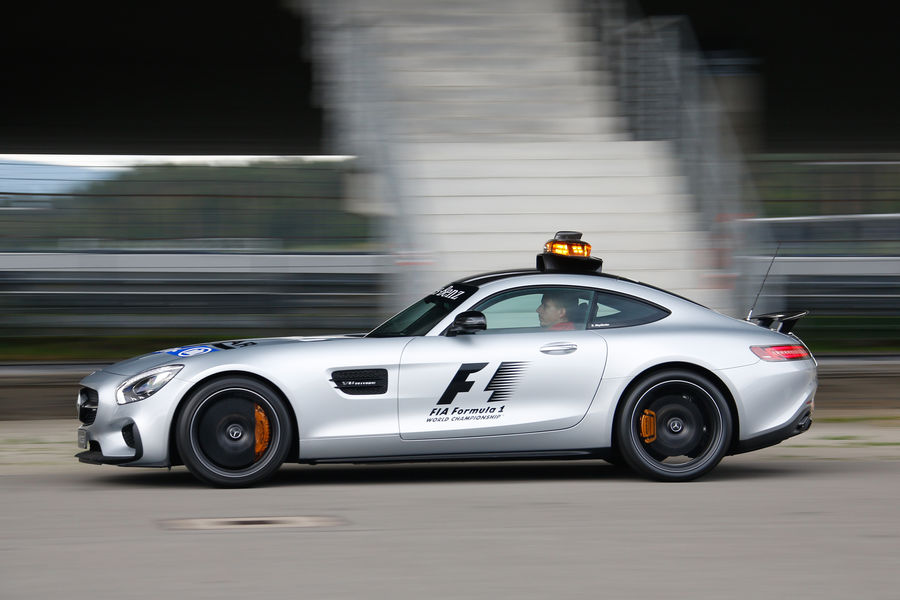 In addition, the GT S benefits from the active engine and transmission mounts and the balanced weight distribution on its way to becoming the most accurate bullet in the sports car segment. Relent? A short twitch of the steering wheel is sufficient, and the massive front end turns to the right angle – always inspiring, just like the serious traction of the rear-wheel drive. Oh, and the sound? Deep, dirty, nasty, befit of a true safety car (with the flaps of the exhaust system always brewing). 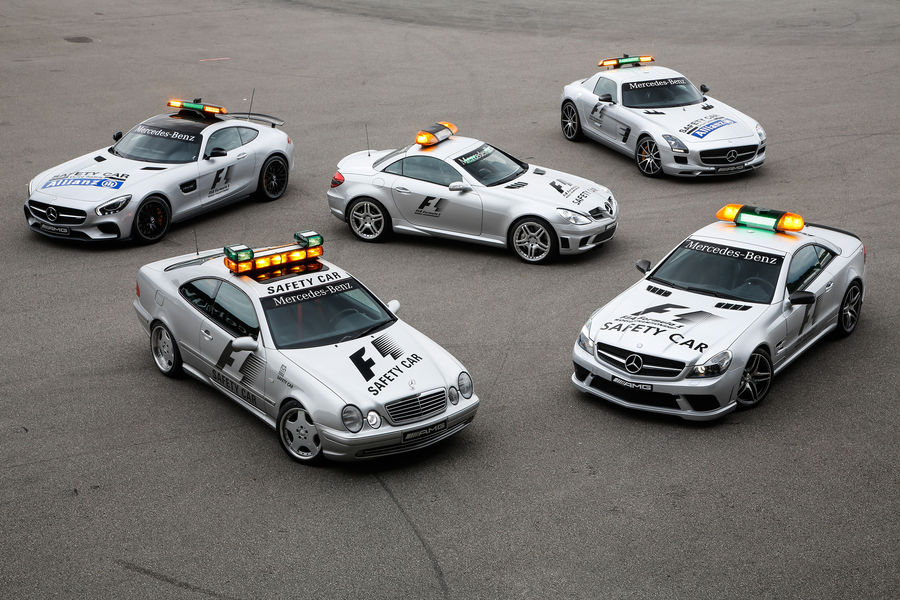 Time for Mayländer to wave us good-bye! Not before we see him thundering away in his current company car, a CLS 63 Shooting Brake, incidentally. Something seems wrong. Quite wrong, though.