A disgruntled former Mercedes-Benz plant employee destroyed over 69 new cars with an excavator that he stole from a construction site.

The disgruntled man drove the front-end loader for 18 miles, all the way to the plant where he used to work. It was one o’clock in the morning when he broke in through the gate of the facility. He headed straight to the parking lot and rammed into the vehicles parked there. No less than 69 vehicles are now on their way to the scrapyard. There is little chance any of them is still worth keeping. Among them, passenger cars and vans such as the Vito-s and the eVito-s. The photos showing up on social media networks for the past few days display the extent of the damage. 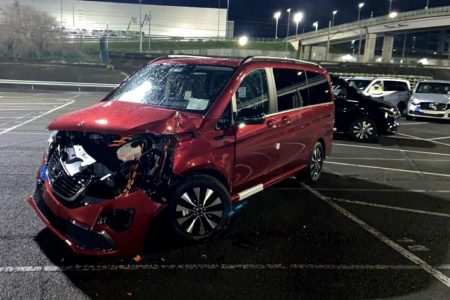 A security guard fired a warning shot before taking him into custody, the Spanish media reports. Authorities revealed that the author of the carnage was a 38-year old man. He used to work for the plant several years ago, in 2016 and 2017. Apparently, he never quite got over the separation from his former working place.

The incident took place in Basque capital Vitoria, northern Spain, in the early hours of the 31st of December. The information on the exact number of vehicles destroyed is quite contradicting, but the damages are estimated at approximately $6 million. On the way from the construction site from where he stole the loader to the Mercedes-Benz plant, the man caused several other damages. Police claim that his next plan was to get inside the assembly line area and continue his attack. Luckily nobody suffered any injures. The maintenance workers that were at the production center at that hour kept out of his way.

The Spanish police is currently investigating the case.

Mercedes-Benz has fired #Basque worker from work in Vitoria-Gasteiz in the last day of the year 2020 and he has wrecked 50 vans. #NeoLiberalism #CorporateEmpire #angryworker #solidarity #Proletarianism #WorkerClass #langileria #RiseUp pic.twitter.com/IP1nX73PDH